Third time is the charm, Max.

Chris Higgins scored, because the hockey gods hate us. Price had no chance on the shot, as it deflected on his leg a few feet away from the net.

Both Douglas Murray and Michael Bournival left the game with injuries. Murray appeared to hurt his leg on a shot block, and Bournival took a Dale Weise stick to the chin. Thankfully Murray returned to the game, but Michael Bournival did not as he looked quite dazed and confused after the contact with Weise's stick.

This time he lost control of the puck and Luongo shut the door. Damn it Max. 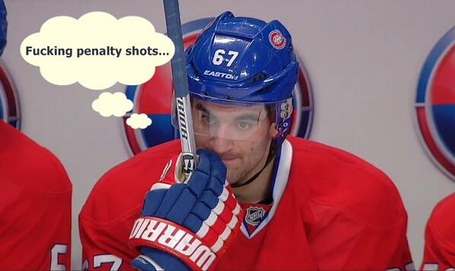