Steven Stamkos out of Sochi Olympics

Although it was expected that he would play due to his quick recovery time, Stamkos gave the red light announcement today.

Share All sharing options for: Steven Stamkos out of Sochi Olympics

Failing to recover in from a broken leg suffered on November 11th, superstar Steven Stamkos announced today that he will not be heading to Sochi to represent Canada at the Winter Olympics.

Team Canada has the depth to deal with losing such an important player, it's still a big blow to the overall talent level of the roster. Stamkos is probably the best sniper in the world, a skill that's virtually impossible to replace entirely.

It's unclear who Team Canada will pick to replace him, although speculation has Martin St.Louis and Claude Giroux as the two players at the top of the list. 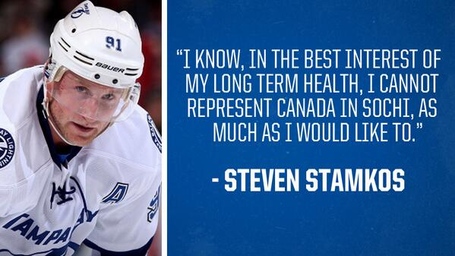 "After reviewing the CT scan this afternoon, Dr. Gutentag made it clear to me and to Steven that the tibia is not completely healed and therefore he should not be participating in game action at any time in the near future," Yzerman said in making the announcement. "Although the doctor was very pleased to this point with the healing process, he explained that the callus surrounding the fracture site is not 100 percent consolidated, and Steven will not be cleared to play in a game until that happens. It was a pretty clear cut decision, no gray areas at all."

"Today is obviously very disappointing for me," Stamkos said.  "I honestly believe that we did everything possible in order to have my injured leg ready in time for the Olympics, but I realize you can't force healing. I know, in the best interest of my long term health, I cannot represent Canada in Sochi, as much as I would like to. I would like to thank the training staff for their dedication and hard work and I look forward to returning to the Lightning once cleared by the medical team."