Before we get into the top six minutes we should all take a minute to appreciate the opportunity to watch an entertaining game, albeit a sloppy one. Montreal probably didn't deserve to win this game in a shootout, but hockey is crazy and things don't always go to plan.

- I am convinced that Marc-André Fleury is how the hockey gods evened out the Malkin and Crosby drafts. Has he ever played well against Montreal?

- Parros was a + 1. The most impressive part about him getting a + was actually that Briere managed to score whilst on a line with big George and Moen. Kudos Danny B. Not to mention he's one goal away from having 3x more goals than that Wendel Clark David Clarkson fellow.

- Emelin covering Crosby however evokes a much different emotion than the one I had when I saw Briere scored:

- Get well soon, Carey. It's not that Budaj is a bad back-up, he's probably one of the better back-ups in the league, however he's certainly not used enough to be able to suddenly handle a back-to-back situation. Therrien's hands were tied in this respect, he had no choice other than possibly starting a very raw Dustin Tokarski. If Montreal hopes to make the playoffs and win a round they'll need Carey Price to continue his dominant ways (and return to the team healthy). In the mean time we should all pray. Budaj got the win, but it was a tough task set upon him by the coaching staff, there's no other way of putting it.

- Douglas Murray may be the only player in the NHL that forces opposing players to break dance after a hit. 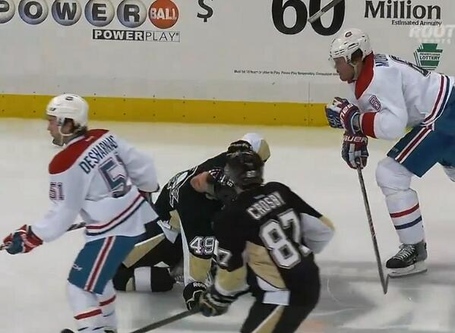 - PK Subban is not having a good season at all. In fact, his lethargic effort on the power play led directly to a SHG. Emelin on the other hand responded with a goal, which tells you everything you need to know about this game...it was...weird. That being said, you can't bench your best player whenever he makes a mistake. Douglas Murray made more mistakes than Subban, David Desharnais made more mistakes than Subban, and I could go on. There's no quicker way to kill a young man's confidence than to rule with an iron fist, like Therrien seems to do. Subban shouldn't be immune to criticism, but benching him at the drop of a hat just doesn't make sense to me, even if it was just for 5 minutes in the third, or the entire OT. If the roles were reversed, Therrien probably deserved to be benched for never using his timeouts. Sacrificing a chance to win a game in exchange for "teaching a lesson" is akin to letting your boat sink to teach a sailor how to do a proper knot. Stop being an idiot Therrien, for the sake of your own job, and the sake of our sanity.

Here are the highlights from the game:

Pacioretty finishes off a nice tic-tac-toe:

Briere scores his second of the game:

The full game recap will be available tomorrow morning.