Canadiens vs Lightning recap: Price to the rescue... almost

It was the best of times, it was the BLURST of times.

Share All sharing options for: Canadiens vs Lightning recap: Price to the rescue... almost

As expected, Montreal and Tampa participated in a hard fought afternoon game, which culminated with Nate Thompson scoring with less than 30 seconds left in overtime. It's worth noting that Price faced endless odd-man rushes during this match up, which is usually the case for the Habs netminder. He kept Montreal in the game, and without him it would have been a massacre. This is a recording.

Oft-maligned Daniel Briere once again rose to the occasion, tying the game at 7:35 of the third.

Briere has received the lion's share of criticism this season among the diminutive forwards, however it's quite clear that he's not always being utilized properly. He currently sits behind only Max Pacioretty (2.39 points per 60 min TOI), Alex Galchenyk (2.13), Brendan Gallagher (1.95), and David Desharnais (1.92) in terms of production among Habs players. Before this game Briere was actually producing 1.83 points per 60 minuets of TOI. He definitely shouldn't be relegated to the 4th line with scrub players, only to be called upon when it matters. Like it or not, Briere can produce and is known to score important goals. Maybe it's time to use him as an offensive threat, rather than a glorified 4th line player.

Rene Bourque has put together a few decent games, despite not showing up very much on the score sheet. It seems like the trade rumours have put a little wind in his sails, and although it would be crazy to expect him to sustain his current compete level, we should enjoy it while it lasts. That being said, Therrien would be better off giving Daniel Briere 15 minutes of ice time, and Bourque less than 10.

Speaking of compete level, it was never a question in my mind, but this afternoon confirmed why Martin St.Louis should have definitely had his place on Team Canada. Not as 13th forward, but in the top 6. He was easily Tampa's best forward, even if Thompson scored two goals. St.Louis ability to create scoring is undeniable, and his tenacity on every play puts even the hardest working players in the league to shame. 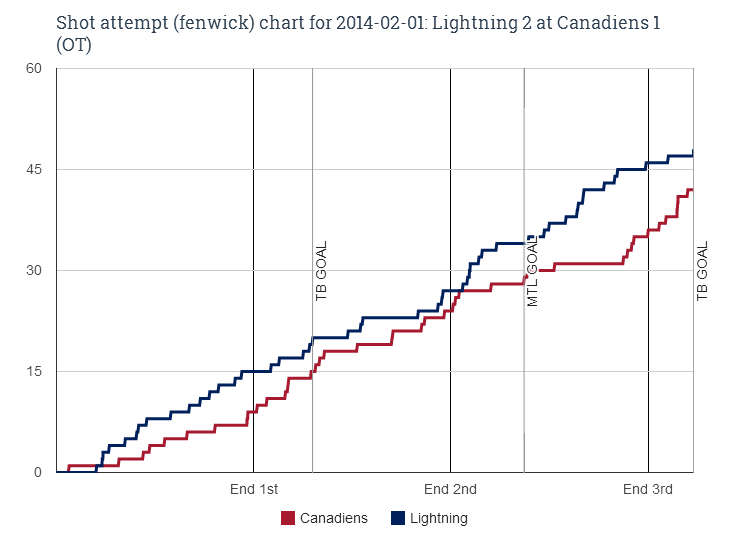 As you can see the shot attempts were reasonably close, with Tampa Bay holding a slight difference in overall shots towards the net. However in terms of shot quality we have to remember that Tampa Bay had several breakaways, and odd man rushes. There was definitely a shot quality variance between the two teams.

It wasn't a terrible game by any means from a Habs point of view. They didn't allow Tampa to go on any extended offensive charges, and responded in kind with chances of their own.

The power play continues to be anemic, and it's probably time that Montreal changes their predictable approach. Every single team in the league knows that Montreal filters their passes to Subban or Markov, to eventually arrange for a shot from either d-men.

If the point shot is blocked, the puck usually ends up on Desharnais' stick who will desperately search for Pacioretty, force a pass and hope that either Max snipes it, or Gallagher (who's receiving a ridiculous amount of abuse in front of the net the whole time) puts home the rebound. Montreal would be better served creating more scoring chances down low, and keeping the point shot as a contingency plan. The more they create havoc near the net, the more it opens up the d-men for a point shot. A moving goalie is a vulnerable goalie, but a goalie that knows exactly what the opposition plans on doing is a lot more likely to make the save.

Or you can just try to get the goalie off their game by telling them to stop whining.

Montreal will look to get back to their winning games tomorrow, in another afternoon game, this time versus the Winnipeg Jets. Price is expected to get the start, as Montreal can ill afford to drop any more points in their race for a playoff spot.