Many expected this to be a blowout, but true to form Ted Nolan's Team Latvia put up a great fight.

Carey Price was the first goalie tested in this game on Latvia's first offensive shift. And the Latvian pressure didn't stop there, as exchanged chances with Canada in what was setting up to be a wide open game. Latvia was clearly working off their momentum from the win over the Swiss, and their intensity was frustrating Canada early.

That's not to say that Canada didn't get several chances, but they failed to capitalize on any rebounds in the early part of the frame.

The shots in the first 10 minutes of the game were 13-3 in favour of Canada, but it sure didn't feel, nor look, like a Canadian domination. Latvia carried the physical play as well, not giving Canadian forwards any space or time to create high quality scoring chances. Canada would have to switch to an offensive system that included cycling down -low, and heavy net presence.

Rick Nash did just that. After creating havoc in front of the net, he found Patrick Sharp on the right hash mark, and Sharp made no mistake and put a quick shot into the wide open net.

Latvia responded immediately. The Bouwmeester-Pietrangelo pairing continued their struggles, as Laurins Darzins was left completely unmolested, and had all the time in the world to make Carey Price bite on his deke. Latvia came to play.

Both teams continued to exchange chances, with Canada getting the bigger slice of the pie, however Kristers Gudlevskis shut the door on several occasions.

John Tavares took a hard hit into the boards, and appeared to injure his knee. Latvia's hard hitting style was starting to create an attrition advantage.

Canada went to the power play shortly thereafter, where Jeff Carter had a very good scoring chance due to a head's up play by Carey Price, but Gudlevskis saved his 25 shot of the game.

The Canadians continued to pepper Gudlevskis with shots, but the Latvian goalie was not just hot, he was basically human lava. Everyone was stopped. Everyone.

Canada failed to score on an early power play, despite putting a lot of rubber towards the Latvian net.

The relentless pressure by the Canucks continued, yet they were continuously unable to produce many good second chances.  Carey Price's first save of the period came about halfway through the third.

Canada looked to break the deadlock after a puck had drifted into the net, however a Latvian player put his hand on the puck, and Tim Peel being Tim Peel failed to call a penalty shot, despite standing about 2 feet away with a perfect line of sight. 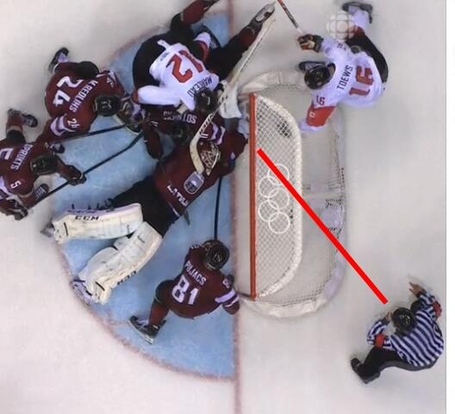 Latvia almost took the lead a few seconds later, but Carey Price responded with a great save.

By 7:30 of the third period every single Canadian player had a shot on net, but it didn't matter as Gudlevskis was determined to keep the game even at 1.

Thankfully for Canada the onslaught of shots yielded a power play goal, as Shea Weber fired a cannon of a shot into the Latvian net to give Canada a 2-1 lead with 5 minutes left in the third. Gudlevskis had no chance on the shot, and was beat low on his right side.

There's no other way of saying it, Gudlevskis put on a goaltending clinic. His performance was one of the best in Olympic history, and almost pushed Latvia to overtime.  You can watch the entire game here. Latvia should be proud of their effort level in this game.

Canada will meet the United States in the semi-finals Friday, and will need to receive a lot more run support from it's forwards if they hope to beat the upstart Americans.

That being said, Canada did put almost 60 shots on net, while only allowing 15, which is quite encouraging.  Those type of numbers are usually produced in a rout, not a 1 goal game. 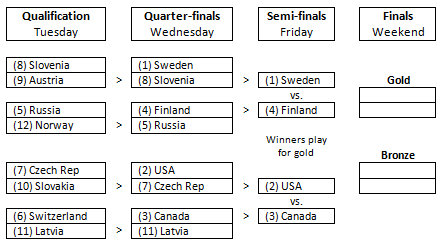