Strong play from Finland pushed this game to overtime, where a hero on defence emerged.

The game started with a furious pace, as both Canada and Finland exchanged scoring chances, but Canada quickly stole all the momentum versus the injured Finns, and created a lot of sustained pressure in the offensive zone.

It appeared that Canada took the lead due to some Rick Nash trickery. The puck sat on top of the Finnish net, and instead of hitting it with his stick Nash decided to hit the netting, and force the puck to pop into the air and eventually make it's way behind Rask. Upon further review the goal was disallowed.

The first major test for Carey Price came from a Leo Komorov tip from point blank range, however Price managed to make the save, even if the pesky Finn forward purposely fell on him.

Canada returned the favour with wave after wave of pressure. They gained the zone fairly easily and applied great pressure on the Finnish defence, yet Finland managed to keep Canada to the outside, minimizing any high quality scoring chances.

A relatively weak tripping penalty on the Finns led to Canada's 1st power play, and they made no mistake.

Sidney Crosby settled the play down, sent the puck to the point where Shea Weber found Drew Doughty all alone in the left circle. Doughty's snipe popped the water bottle and Canada went up 1-0.

The Canadians continued to dominate, however Tuukka Rask kept shutting the door. He denied Kunitz on a point blank opportunity, and then proceeded to negate a very sneaky wrap around attempt by Jonathan Toews.

The shots ended up 8-8 in the frame, yet Canada definitely had the better scoring chances.

Fortunately for the Canadians some weak defensive play by Alex Pietrangelo didn't cost them a goal, as he did his best to attempt to deflect a shot with his glove while he screened Carey Price in the dying minutes of the period.

Here's the video resume of the 1st.

The second period began in the same furious pace as the 1st, with Canada threatening to give themselves a 2 goal lead on several occasions.

Finland struggled to control the puck in the offensive zone, however some miscues from Dan Hamhuis led to a few chances for the Finns.

Canada regained the momentum and spent several shifts in the Finnish defensive zone, although they had a hard time producing any high scoring chances due to the Finns clogging up the shooting lanes and collapsing in front of Rask.

Finland continued to keep Canada to the outside for the remainder of the period, and limited any second chances.

It was a rather dull period, although Jeff Carter almost gave Canada 2-0 lead via a very nice controlled zone entry.

Finland did not produce many scoring chances, however they did manage to level the score via some terrible defensive coverage by Vlasic, and a nifty tip by Ruutu. Price had absolutely no chance on the play, and Finland entered the third frame tied, despite being heavily outplayed all game.

Canada's defensive coverage was incredibly slopping during the frame, with mediocre decisions made by Bouwmeester & Pietrangelo leading the way.

The Canadians pressured, but Finland continued to do a fantastic job shutting down the shooting lanes and frustrating Canada's forwards. The Finns isolated most of the Canadian scorers and never abandoned their defensive coverage.

Jamie Benn did happen to split the defence for a nice scoring chance, but Rask shut the door.

Canada continued to pressure but to no avail, as the game went to overtime to decide the top spot in Group B.

After a questionable missed call on the Finns for boarding, Drew Doughty put an end to the stressful overtime by sniping his second goal of the game.

Canada will most likely face Switzerland in the quarter finals provided they can beat Latvia, and Finland will probably face the Russians. 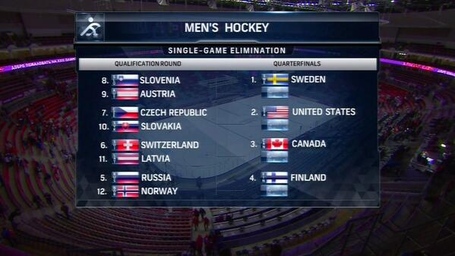