The poorly-playing Habs took on one of the best teams in the NHL, and early on it looked like it would be a massacre. Some incredible effort by Lars Eller and Jiri Sekac turned the tide.

The Montreal Canadiens came into their fifteenth game of the season playing some of their worst hockey in recent memory.  Two blowout losses at the hands of the Calgary Flames and Chicago Blackhawks were followed up by an uninspired match against the lowly Buffalo Sabres that saw the Habs require a shootout to gain two points.  Those games were highlighted by poor possession and serious disciplinary issues.

The game last night against the Minnesota Wild started off in a similar fashion. 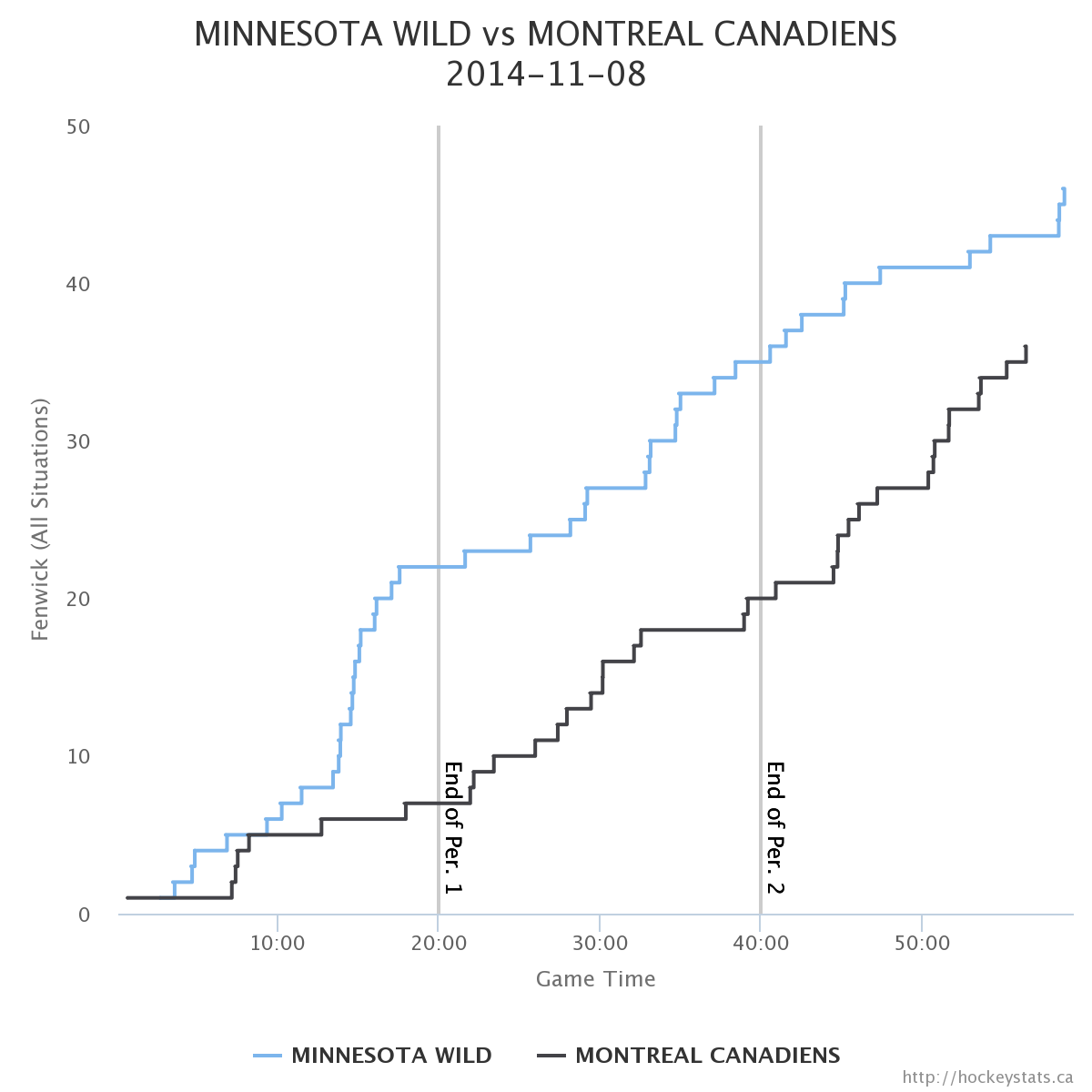 Montreal got a powerplay fairly early in the period, but, as has recently been the case, it was negated by an infraction by the powerplay unit, committed by Andrei Markov as he was forced to interfere with Erik Haula on what could have been a short-handed breakaway.  Later in the period, Brendan Gallagher was called for hooking, sending the Wild to another powerplay.

At the end of the first, the Canadiens were being outshot by the Wild 12-7; out-attempted by a 28-10 margin.

But Carey Price made some tremendous saves to keep his team in the game and held what could have been a multi-goal lead for the visitors to a scoreless tie heading into the second period.

And there the game, and perhaps the fortune of the Montreal Canadiens, turned around.

A different team emerged from the Canadiens' locker room to begin the second period than had entered it after the first.  They began to chip away at the large shot attempt differential, thanks in large part to the hard-working trio of Lars Eller, Jiri Sekac, and Brandon Prust wearing down the Wild defenders and forcing several offensive zone faceoffs.

The Canadiens scored the first goal of the game on a play sprung by a breakout pass from Tomas Plekanec to Brendan Gallagher, who fired a shot on the ensuing rush over the glove of Darcy Kuemper.

A few minutes later, Andrei Markov attempted to pass the puck across the neutral zone through several opposing players, leading to a turnover and sending Minnesota on a three-on-one against PK Subban.  Jason Pominville would score on a tip of a Thomas Vanek pass on the play.

After that goal, Michel Therrien deployed Lars Eller's line to take the centre ice faceoff.  That line immediately got the puck into the offensive zone and worked hard on the forecheck to quell any momentum that Minnesota may have had from scoring.

The hard work of the Eller-Sekac-Prust line was rewarded late in the period.  All three members registered a point on Eller's go-ahead goal with less than a minute remaining in the second.

In the third period, Therrien rewarded the Eller line with some much-deserved offensive zone starts, which they quickly took advantage of as Jiri Sekac scored about five minutes into the frame.  Once again, all three members got on the score sheet, with Brandon Prust taking a hit in front of the net, colliding with Kuemper (and the crossbar) in the process, leaving a semi-open net for Sekac to score his second goal of the season.

Max Pacioretty made it a three-goal lead a little over a minute later on a rebound off the skate of Ryan Suter.

Impressively, the Habs didn't sit on that lead for the remaining fourteen minutes of the third, but rather followed up Pacioretty's goal with their best flurry of shot attempts in the entire game.  The Wild were not given many opportunities to reduce their goal deficit as the Canadiens secured the 4-1 victory with the same effort that got them that lead.

There were some penalties near the end of the game as Nathan Beaulieu and Stephane Veilleux engaged in a fight won so quickly and convincingly by Beaulieu that only double minors for roughing were doled out.

I haven't had this opinion many times this season, but I have to mention that the officiating in this game was excellent.  Maybe that's partly because there were few penalties called against the Canadiens, but I also thought Kelly Sutherland was doing a great job of communicating with the players on the ice, telling them they were engaging in "good battles" and letting them know he refused to call obstruction penalties on stick checks.  Also, while it looks a bit ridiculous stuck on top of their heads, the ref cams give some really interesting viewpoints of the action on the ice.

The result of that quality officiating was a game where the players got to determine the outcome, and it was a nice reprieve from the special teams battles we'd become accustomed to recently.  In this case Montreal's players proved to be too much to handle for what has been a great Minnesota Wild team so far this year.  We'll see if this game was the beginning of a change in fortunes when the Canadiens take on another good Western team in the Winnipeg Jets on Tuesday night.