Without much fanfare, the Canadiens have one of the elite goal scoring forwards in the NHL.

Scoring in the NHL is extremely tough to do. Often times, the expectations set on players to produce offensively are unrealistic compared to what the reality is in the NHL. Often fans believe that a first liner should be giving point-per-game (PPG) production, but considering how little scoring there is in the game today, that is no longer a fair measure for what is actually considered good production. First line players that don't put up a point-per-game or more are often criticized, and the Canadiens have one of those players. That player is Max Pacioretty.

Pacioretty is a possession-driving winger who, while he is not in the NHL elite in points per 60 minutes of even strength play (this year, yet), he is in both shots/60 and goals/60. In goals/60, Pacioretty ranks fifteenth in the league this season, while shots/60 has Pacioretty ranked fourth. Pacioretty is elite when it comes to shot producing and scoring goals. He is not an elite point producer, but is that an issue when he produces shots and goals with the elites in the league?

The argument can be made that as a goal scorer, Pacioretty is underrated. He rarely gets mentioned by the casual fan when it comes to goal scorers in the NHL, even though he has scored 30+ goals in his two 82-game seasons. He has also been on pace for 30 goals in two other seasons, both in which were shorter for various reasons. Yet, it was not until last year that media started saying Pacioretty had finally broken out.

The odd thing is, Pacioretty plays in Montreal. For a long time Montreal has been considered a major market and some even feel as though players who play for the Canadiens are overrated because of this. Except their best forward rarely gets talked about in the national media. There may be some reasons, beyond the control of Pacioretty or the local media, for which he is still not seen as one of the elite goal scorers in the game.

In an interview series of the Canadian teams' captains that the Globe and Mail ran prior to the start of the season, Pacioretty mentioned that he still gets asked about the incident between him and Zdeno Chara from March  2011. Since that play, Pacioretty has scored 95 goals in 215 games, and yet every year someone asks him about that hit. It is an incident that haunts him, not in his play on the ice but in the narrative that surrounds him off of it. Although there have been moments of closure, these moments haven't closed the case completely in the eyes of some.

It seems that nothing Pacioretty does in his playing career will let him escape the shadow that hit cast upon him. Until he played the following season, there were questions that he would ever be the same player again. He has answered that question resoundingly, and yet he is still still plagued by his history to a degree. He cannot control that.

This is an odd one, but there is some evidence pointing to Montreal not being the best market to be seen as a star player in. In the lead up to the U.S. Olympic Men's Hockey Team being named, there were rumours swirling that Pacioretty was not a lock to make the team. This was the same year he scored 39 goals. Yes, he was injured for a while, but at that point he had already established himself as a top American player, especially when factoring in the previous three seasons. He should have never been seen as a bubble player, but he was because he did not have the same media-built name recognition for his play surrounding him that many other American forwards did. 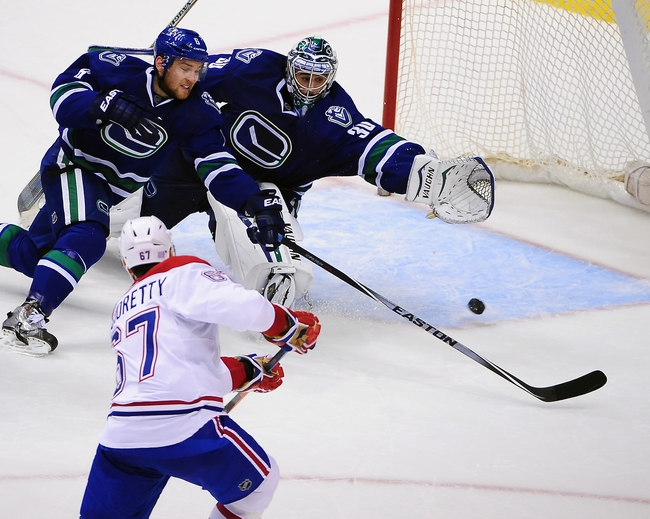 "Pacioretty needs to go to the net more"

It's a reactionary example of perception that is highly flawed. Going to the net is a skill unto itself, and one that should be used in certain instances. A player like Brendan Gallagher has a skill-set better suited to being a net presence, while Pacioretty's skill-set lends itself to being the primary shooter first and foremost. That is not to say that Pacioretty should not go to the net at all; in fact he goes to the net with great success, however going to the net should not be Pacioretty's first option, because being in close effectively eliminates his greatest asset: his shot.

The problem with Pacioretty's playing style is it forces the acceptance of big forwards not always being big hitters who go to the net. Instead, big players can also be more "perimeter" players if that is what is conducive with maximizing their talents. Playing style should not be based on what looks best based on a perception of what certain players should and should not do, but based on what best maximizes each player's talent. For Pacioretty this means he should be used as the primary shooter on his line, his shot being an asset for all around him.

Max Pacioretty does not have the most gaudy playoff numbers in the world. There have been times when he has struggled to put up shots at his regular pace in the playoffs, but that is not the only reason he struggled to score. Luck was a factor, as was injury. He also managed to avoid playing in the playoffs until he was 24 due to injuries and bad team luck. If heroes are made in the playoffs, Pacioretty has not played in a way that has shifted the way hockey pundits talk about him. This is unfair, but that's the nature of the beast when looking at player performance narratives. Unfair, and based on variance in small sample sizes.

Max Pacioretty is an elite goal scorer, but is often seen as a quality complimentary player. Instead of being lauded for being a multiple 30-goal scorer, he was being considered a breakout player by one prominent hockey analyst at Sportsnet. Quietly, Pacioretty has managed to turn himself into an elite shot producer and goal scorer. He has done it after suffering a traumatic injury. He has done it while the national media that controls the story the public hears has focused on the other two linchpins of Montreal's success; Carey Price and P.K. Subban. Pacioretty may never get the credit due to him as an elite possession driver and scorer, but as long as he keeps doing what he's doing, that won't matter for the Montreal Canadiens.