Canadiens 2014-15 season preview: The forwards will look to the youth for goals

Montreal added several new faces to their forward crop, but will the new blood outperform the old guard?

Share All sharing options for: Canadiens 2014-15 season preview: The forwards will look to the youth for goals

Now that we have a better idea who will make up the main roster come October 8, it's time to take a look at what type of lineup the Canadiens might be icing up front.

Scoring was a struggle for the Habs in 2013-14. They finished 21st in goals for, at 2.55 per game, which is significantly lower than the previous season's 3.04 goals per game. Their powerplay suffered a setback as well, dropping from a 20.7% efficiency two years ago, to 17.2% last year.

If the Habs hope to stop relying on Carey Price to steal games, and elevate themselves to the status of true contenders, they'll have to find a way to increase their goal output, which is easier said than done.

I omitted Thomas Vanek for the simple reason that he was a trade deadline acquisition, and didn't factor into the Habs forward situation for the majority of the year.

The wild card in the newly-arriving players is definitely Jiri Sekac. There's no telling how well he'll adapt to the NHL, although the early signs from his play in preseason are encouraging. PA Parenteau comes in from Colorado, and he'll get the opportunity to flourish, given that he's slated to start the year on the first line.

Even though they were the subject of much criticism, Brian Gionta and Daniel Briere combined for 31 of Montreal's 209 goals last season. Sekac and Parenteau will need to have a good start if they want to match, and hopefully surpass those totals. 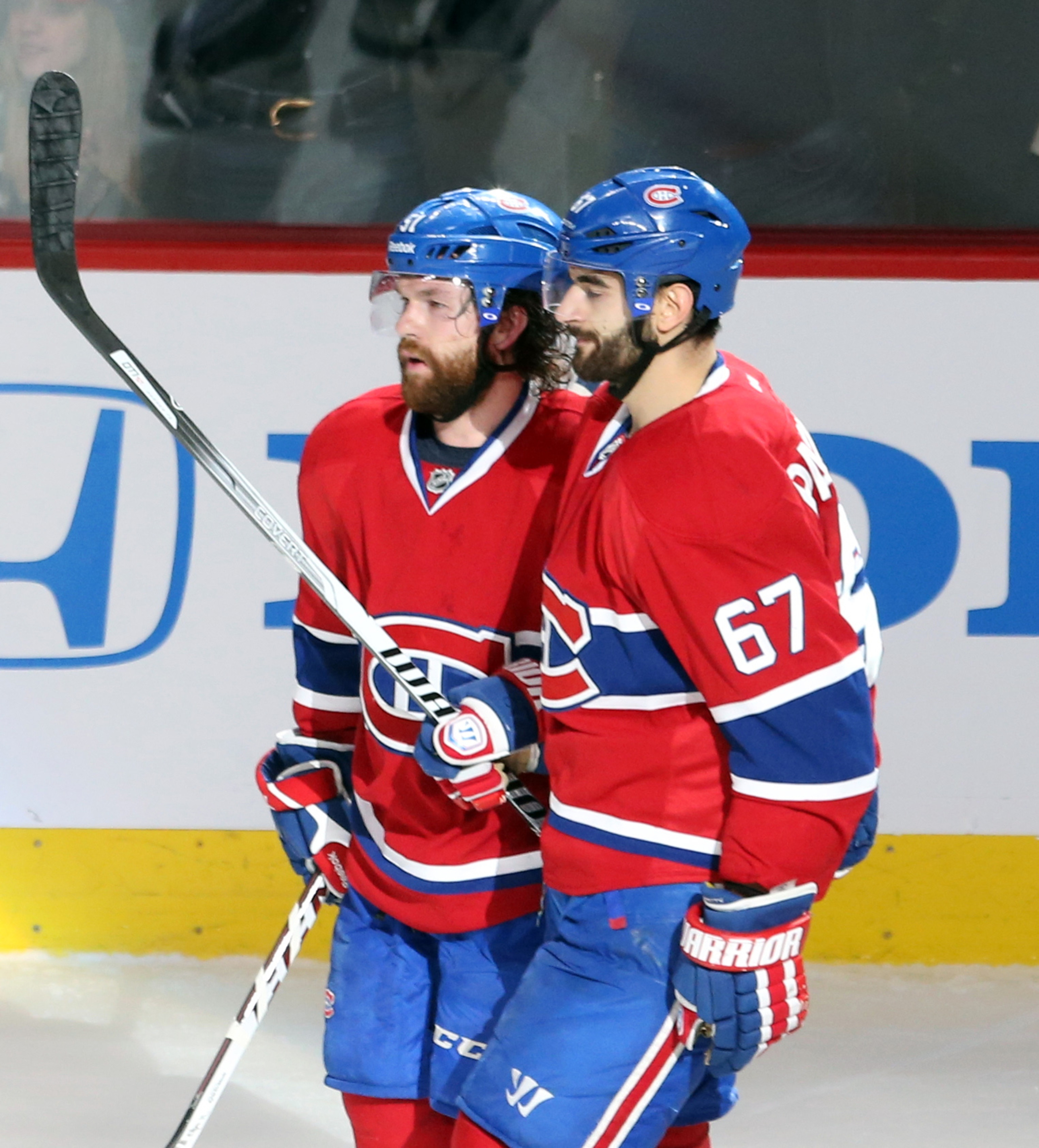 There will be a familiar duo on the first line, that of Max Pacioretty and David Desharnais. As per usual, they'll be counted upon to shoulder the heaviest load of Montreal's offensive output. Pacioretty, who reached a career high in goals last year with 39 in 73 games, will definitely be regarded as Montreal's biggest scoring threat. If all goes well, we could be in for a 40-goal year from the American Olympian. Joining the first line will be newly acquired P.A. Parenteau. In 55 games with the Colorado Avalanche last year, Parenteau scored 14 goals, and added 19 assists. If Parenteau can click with his new linemates, which hasn't necessarily been the case so far in preseason play, Montreal's first line should be in decent shape.

They're likely to see a large dose of offensive zone starts, and first line powerplay duties. In spite of their role as the top offensive guys, I don't expect them to increase their offensive output by a significant margin, meaning Montreal's increased offense will have to come from elsewhere. 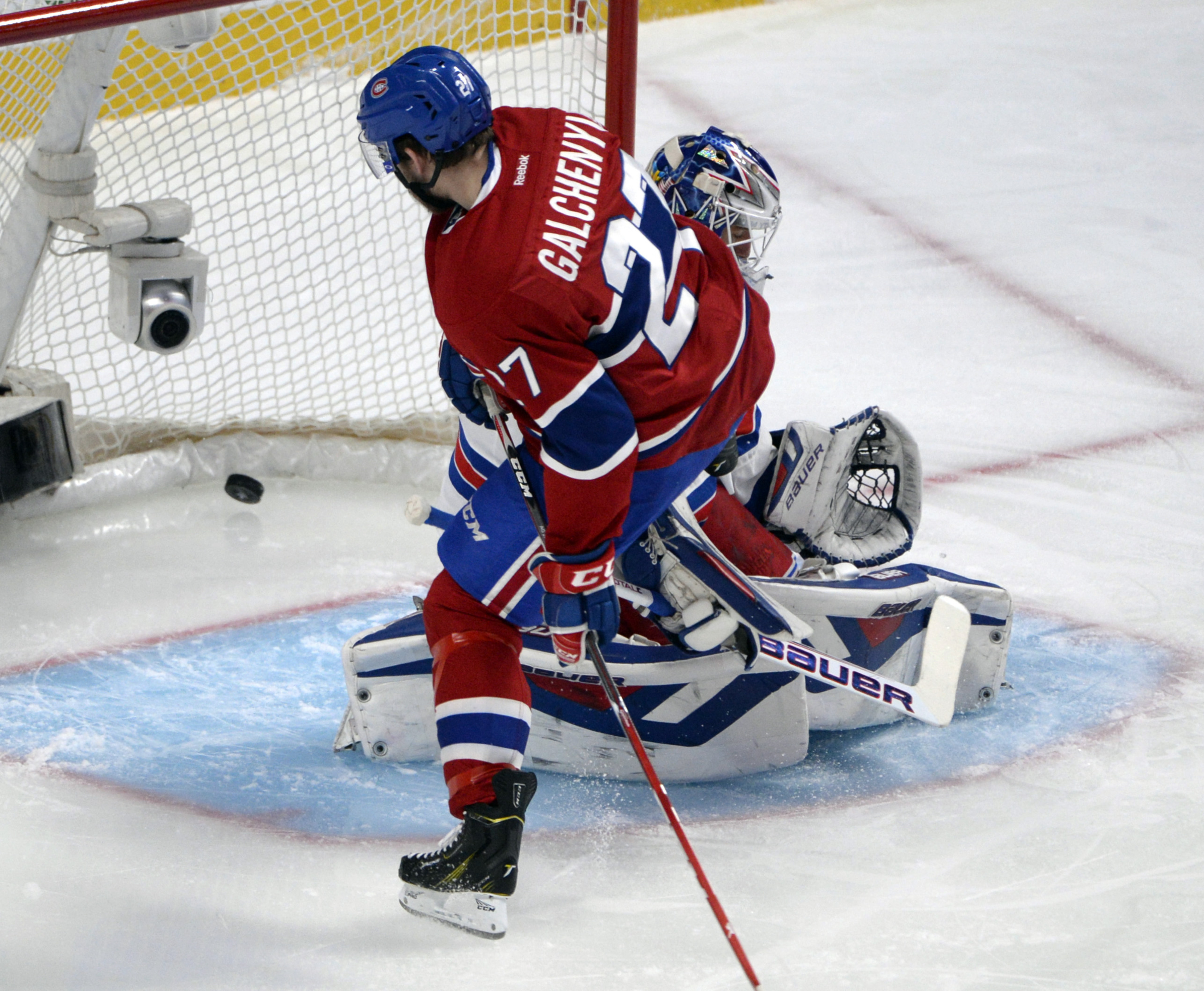 Montreal's best hope to see a boost in goal production will likely originate from their two young and talented wingers, Alex Galchenyuk and Brendan Gallagher. Given that the Habs seem to be ready to hand over more responsibilities to their young players, it only makes sense that both Galchenyuk and Gallagher will see a rise in ice time. Add responsible playermaker Tomas Plekanec to the mix, and you might have the recipe for a great possession-power line. The signing of faceoff specialist Manny Malhotra, should mean that Tomas Plekanec will see a decrease in defensive zone starts, a duty he's been burdened with for years.

Alex Galchenyuk is the X-factor on this line. He'll need to tap into his seemingly endless offensive potential, and hopefully emerge as one of the premiere offensive threats in the league when combined with Brendan Gallagher's honey badger style of play.

Both these wingers are likely to see an increase in powerplay usage, although Tomas Plekanec may be called upon to maintain his usual penalty kill deployment.

Charlie Kelly would absolutely love this line, because it's the epitome of a wildcard. Can Rene Bourque give a shit for more than four games in a row? Will Lars Eller break the voodoo curse that plagued him all year? Is Jiri Sekac the next Fabian Brunnstrom, or the next Mats Zuccarello? It's anybody's guess. 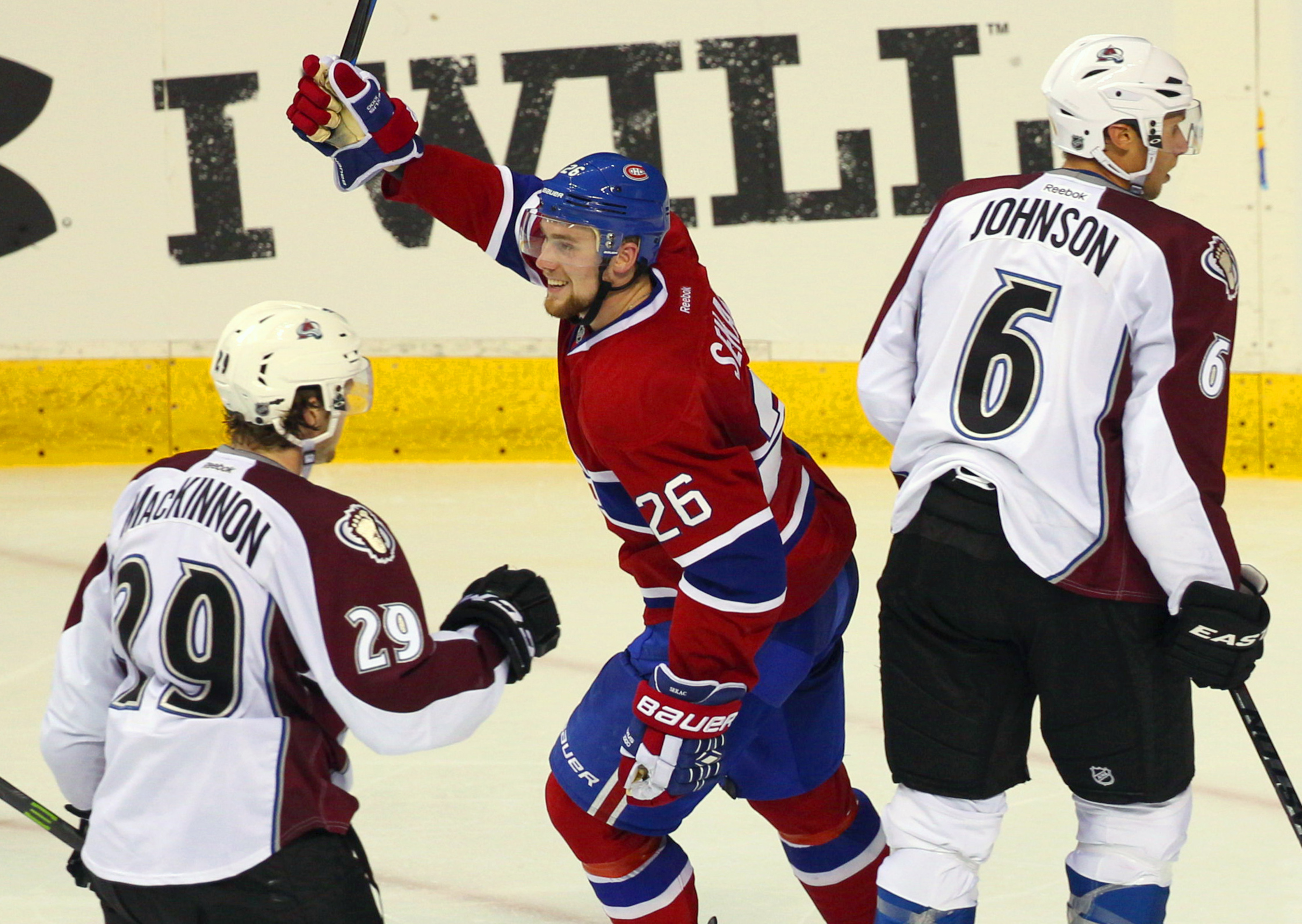 Lars Eller is too good to produce less than 30 points, that much we know. Jiri Sekac seems to be adapting well to North American gameplay, and then there's Rene Bourque, who looks like a top line player one night, and then quickly fades away the next.

If Rene Bourque starts to falter, don't be surprised if Michael Bournival finds his way onto a line with Eller and Sekac. His speed alone is a huge asset, and the 22 year old is well liked by head coach Michel Therrien. Even though he seems to be one of the odd men out at the moment, Bournival could find himself in the top 9 sooner rather than later.

It should be noted that there will probably be a fair amount of movement between Lars Eller and Tomas Plekanec's wingers this year, depending on how much either centre is deployed in a defensive role.

On paper, this might be the perfect grind line. It combines many important elements to a successful fourth line; toughness, defensive awareness, a touch of scoring ability and most importantly, all three players can actually play hockey and not hurt their team while doing so. 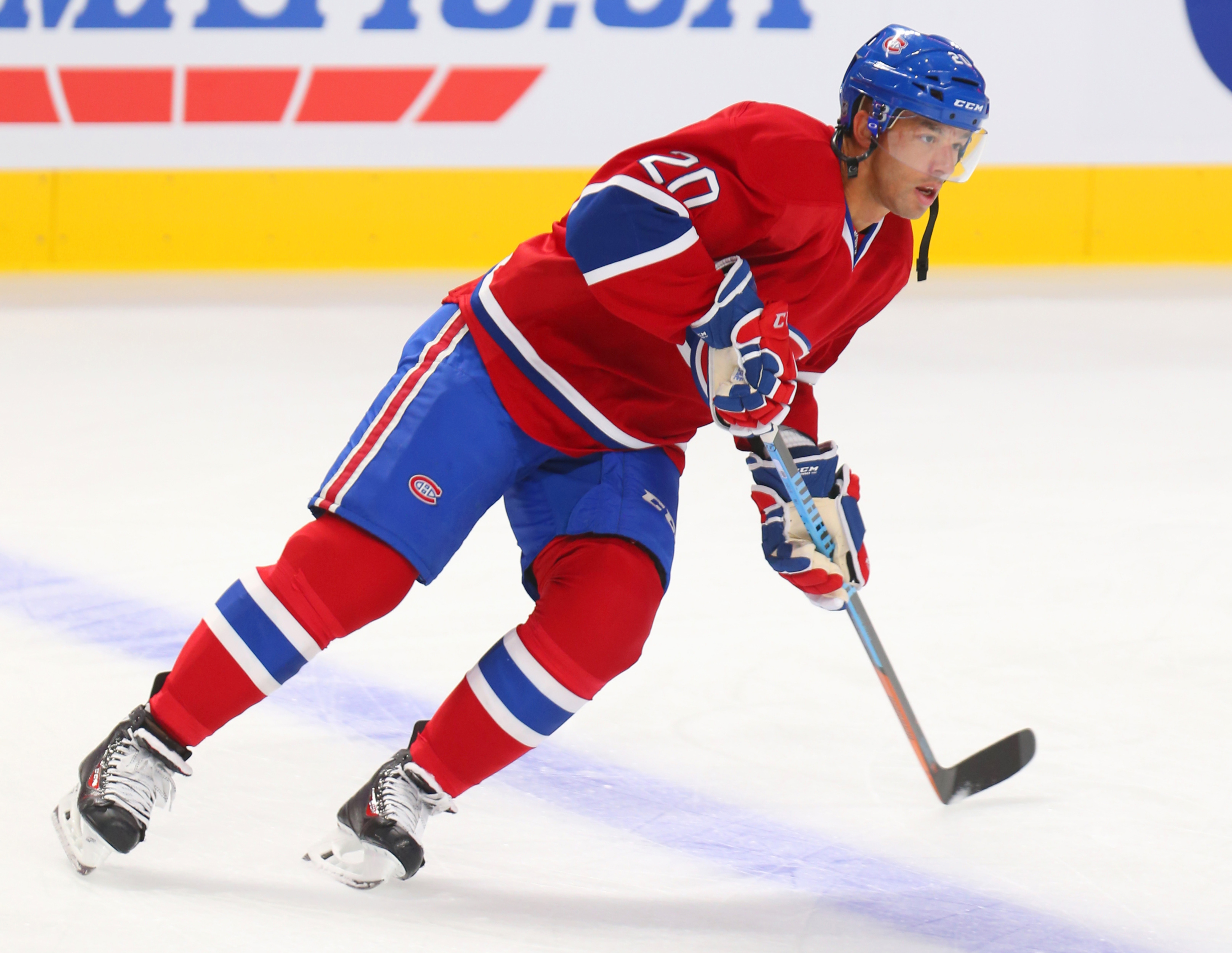 Marc Bergevin has no plans to acquire a goon, which is amazing news for Habs fans, seeing as other teams in their division are also jettisoning their tough guys. That means there will be no wasted roster spot on a face-puncher, and that opens up the possibility of having an effective bottom trio.

I would be remiss if I did not mention Manny Malhotra's face-off acumen, which should be a huge help to Montreal's generally poor face-off results. Manny Malhotra will also be counted on for penalty kill duties.

Travis Moen and Michael Bournival are slated to start the year as Montreal's extra forwards, although they'll surely end up seeing some ice time given that injuries are inevitable. Travis Moen can be counted upon for reliable bottom line minutes, whereas Michael Bournival has the potential to find himself in a much more offense-orientated role.

Jacob de la Rose is expected to start the season with the Hamilton Bulldogs, but a strong showing in camp means he might have positioned himself as the first call-up from the farm. He'll face competition from Christian Thomas, who also looked impressive in camp. Drayson Bowman, Eric Tangradi and Sven Andrighetto may also see some action, depending how many injuries occur.

Will this forward group outperform last year's? It really depends on three factors. First, they need Max Pacioretty to continue his progression as one of the best goal scorers in the league. They'll need stellar player from their young forwards, mostly notably Alex Galchenyuk, Brendan Gallagher and Lars Eller. And lastly, they'll need both Jiri Sekac and P.A. Parenteau to become regular offensive contributors.

Even though that may seem like a tall task, the Habs' forwards certainly have the potential to return to the top half of the league in terms of offensive production. It's just a matter of whether or not their youthful forwards can seize the opportunity.