Over the last nine months or so, we have witnessed the evolution of a rookie general manager into one of the most savvy in the league.

Share All sharing options for: Marc Bergevin quickly becoming one of the NHL's most savvy general managers

When Marc Bergevin took over the Montreal Canadiens, he did so not under a spotlight, but surrounded by an aura. The court of public opinion was so soured on the departed (from the job, not life) Pierre Gauthier, that anyone would have been seen as an upgrade by most fans and media, but to bring in a dashing, eloquent, even funny former player who had every important person in the sport in his "rolodex" as was oft repeated in the following months, was a home run.

Bergevin came in and hired a bunch of people he trusted, all of whom also happened to be former NHLers. He hit all the important buzzwords in his press appearances. The team would be grittier, hard to play against, they were going to get bigger, and he would build through the draft. His big buzzword was character. It would be the most important aspect he would consider outside of talent when choosing players.

Bergevin promised that the Canadiens would be competitive in two years, and people lit up with smiles. Most media members were charmed, fans were convinced, it was a bit of a state of euphoria.

However over here there was a lot of skepticism surrounding Bergevin's early moves. Rick Dudley didn't have the greatest reputation for inspiring moves, and the hires Bergevin made seemed a little... One note. Then there was the grit movement, with the Canadiens bringing in Brandon Prust, Colby Armstrong, Francis Bouillon, and re-signing Travis Moen. None of the moves were crippling or anything, but it was a lot of money to spend on an overrated aspect of the game.

The notion that Bergevin put forth about the Canadiens needing two years to be competitive also didn't hold up to scrutiny. On paper the roster was very strong, especially in the weaker Eastern Conference, and it led many to believe Bergevin wasn't as confident in his players as he should have been.

The hiring of Michel Therrien also didn't inspire confidence, but considering the tight spot he was in both in available candidates due to language, and the fact that a rookie GM doesn't want a rookie coach, he should get a pass on that.

With that said, Bergevin did make a couple trades that worked out very well, sending Cedrick Desjardins to Tampa Bay in exchange for Dustin Tokarski, and shipping Erik Cole out in favour of Michael Ryder and a third rounder. However a first round loss to the Senators sent Canadiens management into reaction mode, viewing a lack of toughness as the reason for the loss, Bergevin traded for George Parros, and signed Douglas Murray, with his big name acquisition of the summer being the over-the-hill Daniel Briere.

Bergevin followed that up by signing defenseman Alexei Emelin to a gigantic four year, $16.4M contract extension, before he ever played a game coming back from major knee surgery. All in all, it was a pretty disastrous few months of work, culminating in a much weaker team on the ice than the previous year, as they struggled with consistency, getting outplayed more often than not. Yet they stayed in the playoff picture due to the brilliance of Carey Price.

From rookie to respected

Sometime around when the calendar turned from 2013 to 2014, it seemed like Marc Bergevin had a bit of a revelation. Michel Therrien wouldn't use underrated defenseman Raphael Diaz, so Bergevin bit the bullet and traded him at his lowest value, yet still managed a solid return in lifelong Habs fan and speedy fourth liner, Dale Weise. Weise was an instant fit with the team, and only got better down the stretch.

With Diaz gone, the Canadiens had a hole on the right side of their defense, so Bergevin acquired the hugely under-appreciated Mike Weaver from Florida for a fifth round pick. He followed that up by shocking everyone by acquiring veteran sniper Thomas Vanek from the Islanders for just Sebastian Collberg and a second round pick in 2014.

Vanek's contributions in the playoffs were less than what was expected, but at the very least his presence allowed the Canadiens to handle matchups more effectively, and increased the output of the powerplay unit. In the tight seven game series against the Bruins, those contributions may have been the tipping point.

Vanek was clearly a rental though, and there were still problems to take care of in the offseason, including players whose contributions were lower than their salaries. Bergevin also had several big name players to re-sign, starting with Andrei Markov, who he got under contract for a very reasonable $5.75M per season for three years. 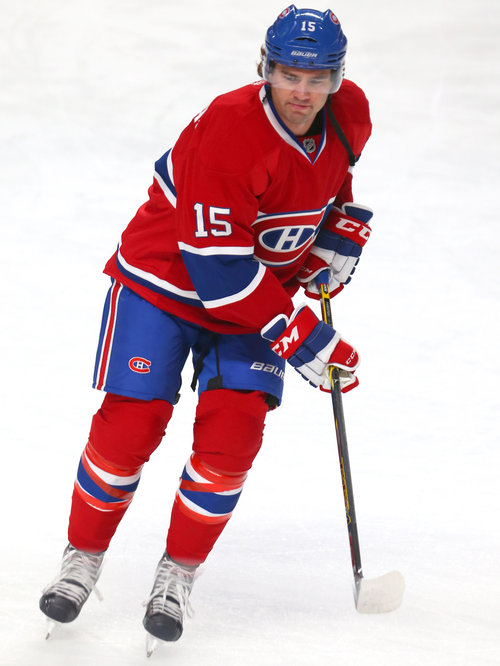 Many general managers are loath to move players they had recently acquired, but Bergevin pounced on a deal to send Daniel Briere to Colorado in exchange for P.A. Parenteau and a fifth round pick. Parenteau was not only younger, and carrying the same cap hit, he's also clearly a far superior hockey player at this stage, with the draft pick just being gravy on top. The trade wasn't just a good one, it was brilliant.

A day later, Bergevin made the extremely tough decision to trade Josh Gorges to Buffalo for a second round pick, freeing up the roster spot and cap space to sign the superior Tom Gilbert, who also balanced the handedness of the defensive squad.

Bergevin made yet another tough decision later in the day, letting team captain Brian Gionta walk in free agency, refusing to match a large contract offer from Buffalo. Gionta loss was slightly offset by the Canadiens winning the auction for the services of highly touted KHLer Jiri Sekac, who has seemingly fit in very well with the team, and looks to be an impact player on Lars Eller's wing to begin the season.

Facing a ton of criticism, including from myself and others on this site, Bergevin held strong in a tough contract negotiation with P.K. Subban, that though it looked to be contentious at times, and took longer than I'm sure anyone would have liked, ended in locking up the best defenseman the Canadiens have seen since Chelios to a max term contract at a reasonable dollar figure.

Then, as training camp wound down, Bergevin again impressed with his savvy trading ability, managing to send Peter Budaj, his much higher than average cap hit, and Patrick Holland to Winnipeg in exchange for Eric Tangradi, who has been a very solid fourth line player recently, but will begin the year in the AHL.

To top it all off, Bergevin made the decision to cut long time Hab Francis Bouillon, a player he obviously greatly admires, as does his coach, in favour of the younger and clearly superior Jarred Tinordi and Nathan Beaulieu. Bergevin has made move after move after move that has improved his team, and set them on a path to a prosperous future, and he's done so by removing players that, while not all of them are great hockey players anymore (some are), they are great people. That's a very difficult thing to do when you're close to the situation.

After trading Josh Gorges, Bergevin mentioned that he's not in that job to be friends with the players, though during the playoffs it was extremely obvious that his connection to the team is stronger emotionally than most executives. You can be sure that this summer was a painful one at times for Marc Bergevin, but he continued to make the right calls, time after time.

On top of all this, Bergevin has made his team significantly younger. On opening day last year, the Canadiens had an average age of 28.7 years old, whereas this year the Habs will be down to 27.5 years old on average. That doesn't look like a lot, but cutting off more than a year's worth of age on average when your entire core got one year older is very impressive.

You can't fall in love with players at the executive level, because everyone has an expiry date in sports. Having a general manager that is obviously living and dying with the ups and downs of the team is great to see from a fan standpoint. Bergevin is clearly a 'players' GM', but he showed this summer that he has more than enough of the necessary ruthlessness to cut ties with a player if it means making the team better.

The evolution of Marc Bergevin has been swift, and I think we can stop calling him a rookie now.