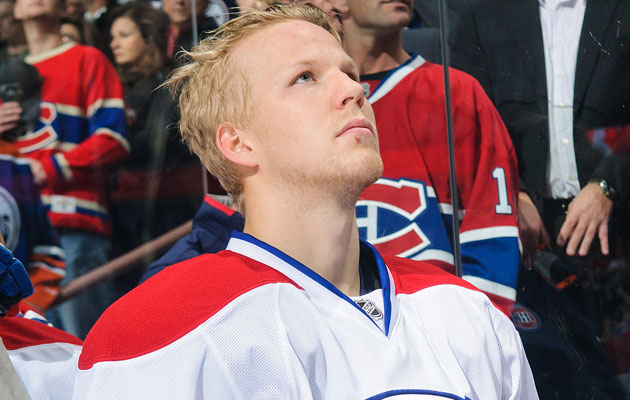 Lars Eller was finding himself in the right place at the right time all game. He’d smashed home three goals already, all of them quick release shots from in tight, but he wasn’t finished. He was skating to score, and it was obvious to anybody watching the game. As he pulled the puck towards the net and the exposed Ondrej Pavelec yet again, he was hauled down and awarded a penalty shot. His gall was such that he wound out to the right wing, careful in his approach, and completed a neat spinorama before depositing the puck in the net and falling over Pavelec. It was Eller’s fourth goal of the game. It was January 4th, 2012, and I was positive it was our introduction to the year of Lars.

In a way, it was. Eller finished the season with his second highest point total with 28, a mark he improved last year with 30, but the 2011-2012 season also marked a career high for goals. Eller scored sixteen that year, a quarter of them coming in the fateful game against the Jets. Lars Eller was and is strong and defensively responsible. He has good hands around the net and plays well with good linemates regardless of his assignments. But Lars Eller is 25, and he’s yet to be the Lars Eller we want him to be.

We see flashes of it; that brilliant game, the deep run in the 2014 playoffs. The most important thing for Lars Eller to play well is for Lars Eller to think that he can, and that starts with a coach who believes in him. After benching Eller for all but six and a half minutes of Tuesday’s game against Calgary, it’s clear Therrien doesn’t. The question remains whether Therrien should, and to be frank, it’s a valid concern.

When will fans see the Lars they want to see? In fits and starts, we’ve seen the ideal Eller over in the last four seasons. We tell ourselves the analytics show he isn’t being employed properly, that his zone starts are difficult and that his opponents are strong. We say that Eller’s linemates are weak (undeniably, they are) and that he doesn’t get enough ice time. We make excuses for a good player who simply hasn’t been afforded the opportunity to be good and yet has had moments of brilliance anyway. We begin to craft the image of Eller around players we want him to be – with his defensive awareness, he could be the next Plekanec! He plays so well with Gallagher and Galchenyuk, they could be the next Kid Line!

But the facts are these: Montreal already has a Tomas Plekanec, and both Gallagher and Galchenyuk have proven themselves exemplary enough to be moved to the top six. Lars Eller’s defensive acumen means he can play on the third line, sure, but the fact is that he hasn’t distinguished himself as a consistent offensive player to warrant consideration on the Habs’ current top six. And Montreal’s bottom six as Therrien sees them aren’t a good fit for Lars.

Would Lars Eller produce more with better linemates? Sure. Jiri Sekac is the obvious fit (Sekac is the next Tomas Plekanec! we all say gleefully, as Lars looks on knowingly). Eller’s production with Almost Bourque and Weise has been virtually nonexistent. Lars Eller – he of the unfulfilled potential, of the crappy linemates and the tough zone starts – is the only one on that line with the capability to score, but he’s not capable of creating those chances on his own. He’s simply not good enough to bear that weight every game. Is it fair to ask him to find a way to succeed among linemates who could be generously described as failures?

So Lars can’t crack the top six, and rightfully can’t support the linemates he has. Therrien seems reluctant to give him the linemates that would make him effective. The resolution seems obvious to an outsider – trade away the player who is without a spot on the team. Eller doesn’t deserve to be benched, but he does deserve the opportunity to be a go-to scorer with quality linemates, ice time and zone starts. We don’t have to wait for Eller to be good to trade him, since he’s good now. The Habs are incredibly deep at centre.

This isn’t a screed against Eller, who is undoubtedly a talented hockey player at the highest level of competition, but it is an examination of how he fits with the deepest squad the Canadiens have boasted in decades. The fact of the matter is that Eller has a very specific place on the third line, if that line is designated an able scoring line with intense defensive acumen and a transition game – think Eller, Bournival and Sekac. But until Therrien and Bergevin come to that realization, the observation is that Eller can’t elevate the play of the Habs muckers and grinders and it’s not fair to ask him to do so. If you can’t use him, do the man a favour and put him in a position to succeed. Lose him.