With the pre-season drawing to a close, can the Habs earn a win over their new-look division rival?

Share All sharing options for: Canadiens vs Senators game preview

The Montreal Canadiens have started their 2014-15 campaign with success. Tonight, they'll aim to wind down their preseason in the same manner.

On Wednesday night, the Habs iced a young lineup and managed to take-down on the NHL's best teams. Now, with five prospects back in the minors and roster decisions close to made, the Canadiens will start a preseason-closing back-to-back with a division rival. 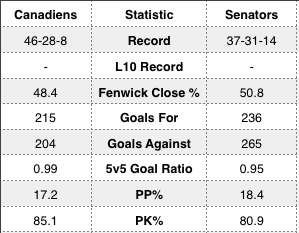 As we reached this time last year, animosity toward the Senators was at an all-time high. The Habs had their season ended at the hands of their closest geographic rivals, as a playoff series in which Montreal started out the favourite eroded into embarrassment and frustration.

That burgeoning rivalry failed to sustain itself in last season, mostly due to a season-long malaise in Ottawa. Kanata's finest made some major moves heading into the year, acquiring Bobby Ryan and saying goodbye to longtime captain Daniel Alfredsson. No longer supported by the heroic goaltending that Craig Anderson had provided the year prior, however, injuries and a lack of depth did-in the Sens.

When Alfredsson left, the Senators began to step toward a new team identity. The summer of 2014 has cemented the transition.

Jason Spezza lasted just one season as captain. Trade deadline rental Ales Hemsky proved to be just that, following Spezza to the Dallas Stars. These two players will be replaced, ostensibly, by David Legwand and Alex Chiasson, a significant downgrade at face value. Now, the burden shifts to the Bryan Murray's new core.

Ryan and Clarke MacArthur, high-performing acquisitions of last season, will be relied upon even further. Erik Karlsson is now wearing the 'C', with new expectations placed on him as well.

With all of last season's changes, the end result was a team that couldn't find a way into the playoffs. Tonight, we'll get our first look at a team hoping that this season's changes were the right ones.

It's a small wonder that the last Habs-Sens game was even played, lest it collapse under the wait of the anticipation that accompanied it.

Two games ago was one of the more memorable Canadiens games in recent memory, as the Habs overcame a three-goal deficit in the final three minutes before ultimately emerging victorious in overtime.  Honestly, this game could never have lived up to the standards of its predecessor, but it did turn into the kind of rollicking barn-burner that brings its own kind of fun.

Montreal went down three early, and in a stark display of cause and effect, the come-back began once Michel Therrien stapled P.K. Subban to the bench. While Subban atoned for his role in the Senators period-opening salvo, the Habs again took the come-back trail, starting with an Andrei Markov goal from behind the Senators goal-line.

Thomas Vanek may be gone, and given his playoff performance, he may not be missed. #20 had some good times in Montreal, though, and if there were ever a concise description of Vanek and Pacioretty's short-lived fireworks, the four and a half minutes below might just be the best example.