Canadiens vs Flames recap: Carey Price reminds us all, he's the best in the world

While the Canadiens were outplayed in every possible way, Carey Price stood tall and stole two points.

Share All sharing options for: Canadiens vs Flames recap: Carey Price reminds us all, he's the best in the world

Maybe it's the travel, maybe it's the lack of sales tax, regardless the Habs always seemed to have bad luck against the Albertan based teams. Monday night was a prime example and it continued for most of last night. Habs had penalties and they had them early and often. Faceoffs, which were plentiful, were another source of frustration for the Canadiens. While David Desharnais was able to go 62% in the faceoff circle, the rest of the team had their struggles.

Scoring was again a problem for Montreal, the power play still isn't clicking and the Habs have yet to capitalize on a road pp chance this year. After more than 92 scoreless Albertan minutes, former Oiler Tom Gilbert potted the Habs first Western goal to tie the game.

Lars Eller had a nice short handed chance in the first and was rewarded for his efforts with less than six minutes of ice time (including overtime). In a game where no Habs skater particularly stood out, especially in regulation, it was maddening to see the Dane benched for large parts of the second and third. Eller's miscues were no more egregious than Markov's, whose at times less than stellar play was reward with over 30 minutes of ice time.

Goaltending was crucial for the Habs with Carey Price turning in an exceptional game stopping 37 of 38 shots by the Flames. It could have been an absolute defensive meltdown had Price not turned in one of his best games of the season. In the Flames end, Jonas Hillier was solid when he needed to be - stopping an early breakaway by Rene Bourque in the first and stymieing the Habs in the brief moments in the third when they were able to mount sustained pressure. The Habs certainly helped Hillier out by only garnering 17 shots in regulation before managing two more in OT (the only period in which the Canadiens outshot the Flames). 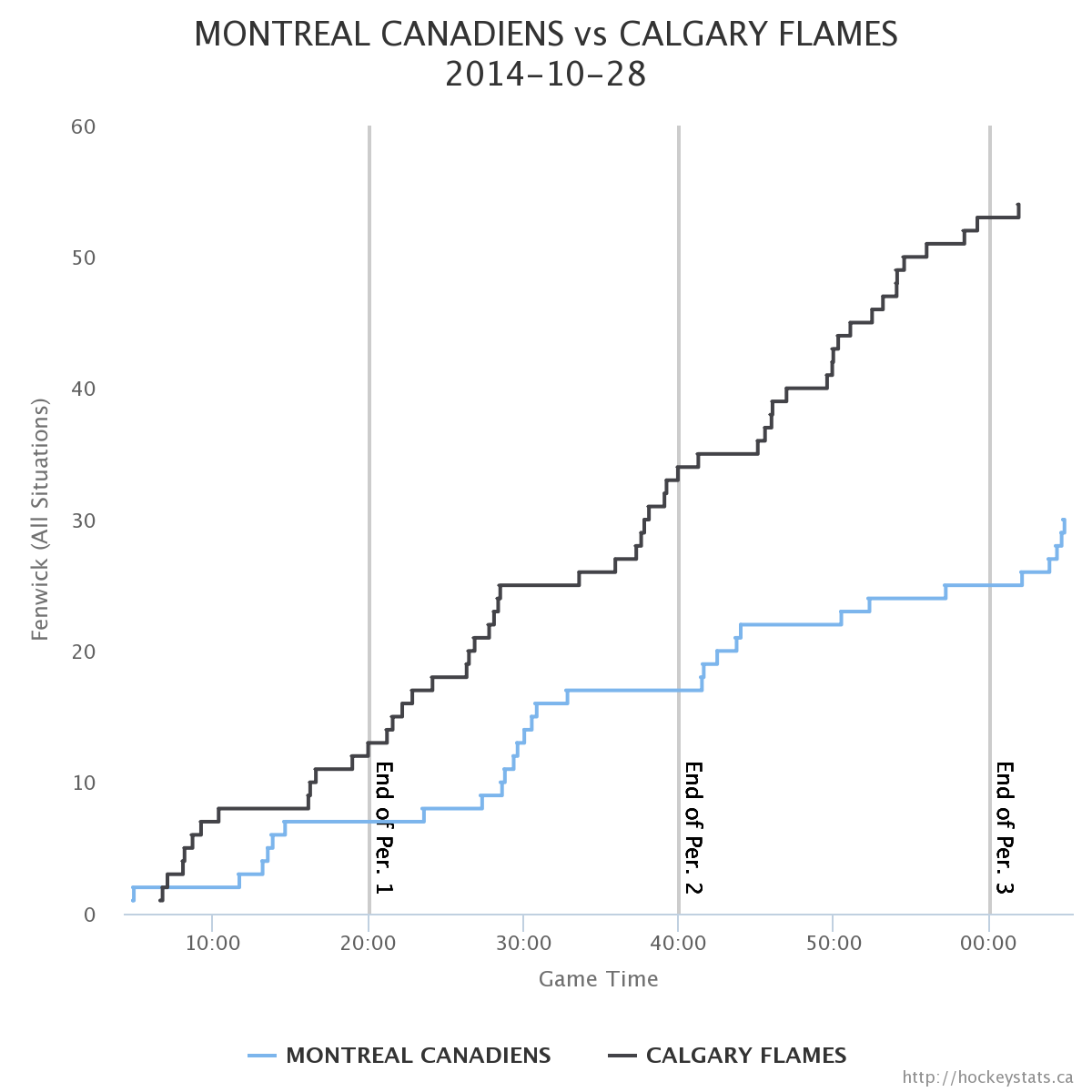 The Jarred Tinordi - Matt Stajan knee-on-knee hit looked bad, but it certainly wasn't of the Ulf Samuelsson on Cam Neely variety. Always awful to see these sort of hits and even worse when the victim runs into an immovable object. It's even worse for Tinordi to be penalized essentially because of optics. If there's harm, there's got to be a foul, so Tinordi, whose crime is that he's huge, sits because Stajan gets hurt. In any case, we all hope Stajan isn't injured and makes it back soon.

Overtime featured some inexplicable appearances by Bourque and Weise and not a sniff of Eller. How does this even happen? Good looking 4-on-4 play from Gallagher, Subban, Markov, and Galchenyuk finished off the extra time leaving me convinced Galchenyuk would put it away in the shootout. He just looked so good out there. But that often seems like every game as of late.

Johnny Gaudreau, whose Johnny Hockey moniker I loathe, had a similarly smooth looking game. The Boston College product, who looks like he just stepped out of the movie, The Sandlot, had a nice chance against Price in the third and read the play beautifully to set up Giordano in the second. His slickness in the shootout was his undoing, as his double tapped goal was called off, setting the stage for a new Habs fan-favourite, the man named P-A.

Parenteau, who hadn't registered a shot all game, potted the shootout winner immediately after Gaudreau's goal was waved off. The Hull, QC native is challenging for the slyest acquisition in Bergevin's time overseeing the team. Closing the case on a game many thought would never end or end well, has quickly won over the Habs' fickle faithful.