Canadiens vs Oilers recap: A good effort, a bad result

Despite the score, the Canadiens put forth a decent effort, but it just wasn't their night.

Share All sharing options for: Canadiens vs Oilers recap: A good effort, a bad result

The Habs got their Western road trip underway last night, and despite their best efforts, their historical struggles in Alberta continued. 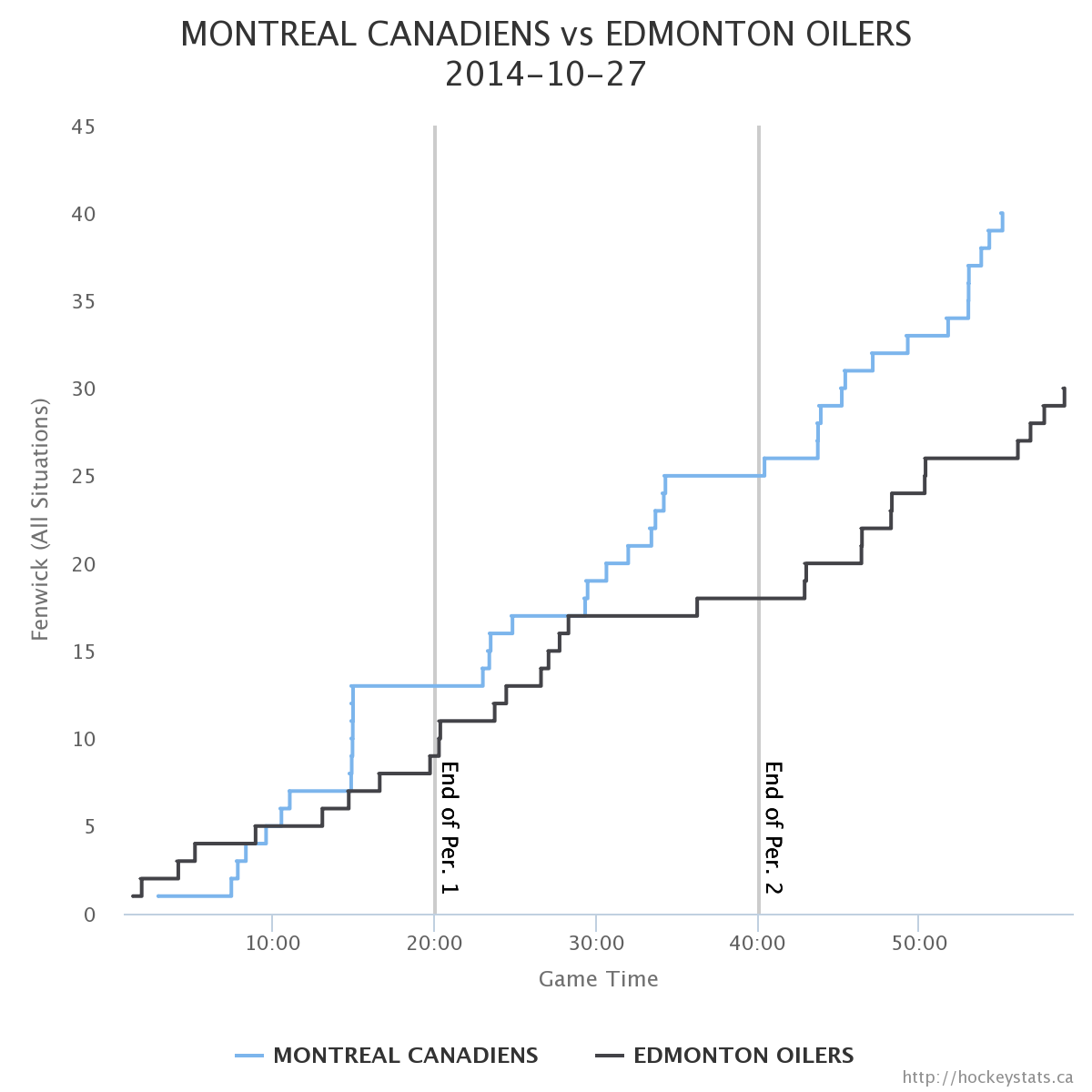 The Habs fell into penalty trouble early, which slowly yet surely became the ongoing theme for the Canadiens all night. They would never hit their stride, thanks to six minor penalties, and as we all know a lack of discipline usually leads to a frustrating loss. I say frustrating because the Canadiens definitely out-chanced the Oilers, but they came away empty-handed.

To their credit, Edmonton blocked a ton of shots, and did a good job boxing out Habs forwards, as not to give away any rebound scoring chances. They protected Ben Scrivens quite well, who made 29 saves for a solid shutout performance. To the surprise of absolutely no one, Benoit Pouilot opened the scoring late in the first period. It would end up being the only goal Edmonton needed, although Nail Yakupov adding an insurance marker early in the third, followed by an empty-net goal by Taylor Hall.

It was a whistle-filled, momentum-less affair that featured 65 faceoffs. 65. Unlike previous games, the Canadiens struggled in the circle, as evidenced by the faceoff master Manny Malhotra going 5-12.

Despite the lack of scoring, Alex Galchenyuk did his best to produce some high-end scoring chances, and seemed dangerous every single time he touched the puck. Galchenyuk constantly creates space for himself on the ice, and it's sometimes hard to believe he's only 20 years old.

The loss is definitely not a valid reason to panic, but the Canadiens might want to try out Galchenyuk alongside Max Pacioretty in the near future. The pair showed promise in the preseason, and it could be what sparks a Pacioretty goal avalanche.  Speaking of interesting duos, the combination of Tomas Plekanec and Max Pacioretty on the penalty kill continues to yield great results, often times out-chancing their opponents despite the man-disadvantage situation.

As it stands, it's not all great news on the specialty teams front, the powerplay continues to struggle on the road. They're currently 0-18 this year when away from the Bell Centre, and the vast majority of those powerplay opportunities have been wasted. Tonight we were treated to an excruciatingly tough setup that saw the Canadiens struggle to gain the zone with the puck.

Even though he didn't score, P.K. Subban put on a defensive clinic, shutting down Taylor Hall on numerous opportunities. Unfortunately for Subban he received a shoddy tripping call late in the first, but that shouldn't take away from his top notch effort. The other encouraging effort on defence came from Nathan Beaulieu, who had a very strong outing in his first game back from a stint with the Hamilton Bulldogs.

Despite the frustrating loss, the silver lining is that there are two players in the press box that would likely help the Canadiens create scoring chances, meaning there's a possible very easy fix when it comes to the Rene Bourque and Travis Moen conundrum: Jiri Sekac and Michael Bournival.

With Bournival you get a plethora of speed, and with Sekac you get puck control and controlled zone entries. Take your pick, but either of them would likely outperform what we've seen from Bourque and Moen.  That being said, Dale Weise saw only two shifts in the third period, meaning that he could very well end up being the odd man out.

The good news is the Canadiens are back at it tonight, and will look to end their Alberta scoring drought versus the Calgary Flames.