A solid team effort led to a hard-earned two points for the league leading Canadiens. 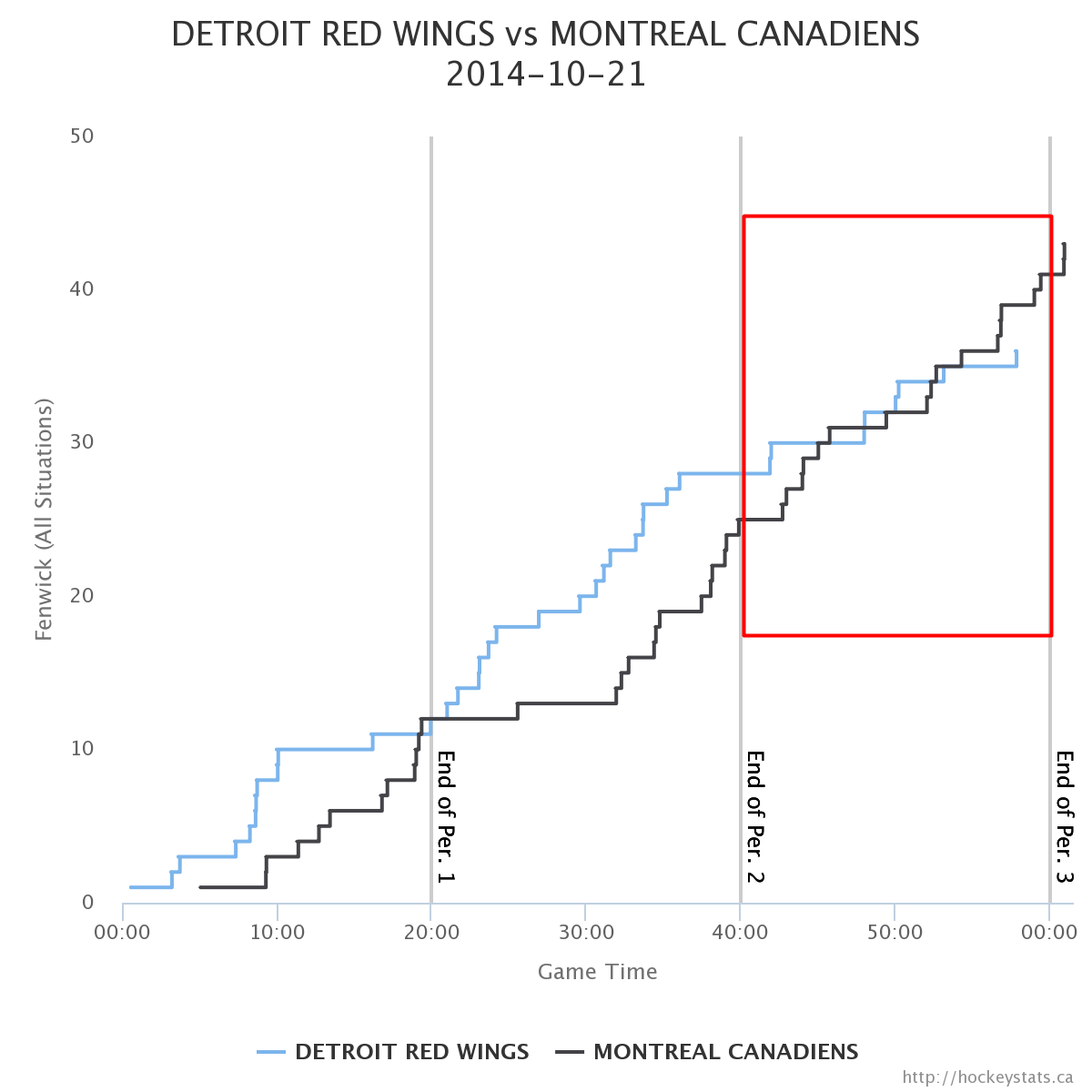 The Canadiens got off to their usual slow start, this time versus the Red Wings, allowing their opponent to score first for a sixth time this season. Once again, they found a way to pull out the win, and overcome their early poor play. A late tying goal by Alex Galchenyuk, and an overtime marker by David Desharnais led the Habs to their six win of the year, taking home 12 out of a possible 14 points.

As has been the case throughout the early part of the 2014-15 season, the Canadiens poured it on during the third period, displaying the same never-say-die attitude that has helped them win many of their games.

Montreal found themselves in mild penalty trouble throughout the game, compounded by the fact that every member of their first line took a minor penalty at some point during the match up, including two minors on Pacioretty. One being a very well-deserved embellishment call. This led to a plethora of scoring chances for the Red Wings, and a veritable choke effect on any momentum the team tried to create.

If we're being honest, it wasn't the best effort from Pacioretty's line, and even though they did create the game-winning goal, there wasn't much encouraging play from them last night.

The Plekanec line on the other hand took part in a very fruitful game, which culminated in another top-quality goal from Alex Galchenyuk. We've talked about the young American at length this year, and even though we should continue to temper our expectations when it comes to his offensive output, it seems as if he's ready to establish himself as an offensive threat that opposing teams struggle to contain. We'll keep an eye on him going forward, but it seems as if the Year of the Galchenyuk is well underway. Although all eyes are on his dazzling offensive talents, Galchenyuk is quickly developing a feisty side to his game, and it's not uncommon to see him throw his weight around. Instead of shying away from physical contact, he's embracing it.

The third line created some chances, and we really don't need to beat the dead 'Almost Bourque' horse anymore. All I would say, is that the line could have used a little more Jiri Sekac, and a lot less Rene Bourque. In fact, I'd wager that a line composed of Bournival-Eller-Sekac would give opponents fits. It's not that Bourque isn't trying, he's clearly hustling out there. It's more that he's a complete momentum-killer in most situations.

To their credit, the Habs' fourth line was on point, and even though it's clear that Travis Moen is too slow to keep up with his teammates, the grinders did their best to create turnovers and even contributed some timely scoring chances. Combined with Malhotra's faceoff prowess (78% tonight), the fourth line might have put forth their best performance of the year.

On the defensive side of the coin, Montreal's top four performed admirably, even though there was a fair amount of blown coverage on the Red Wings goal by the Emelin-Subban pairing.

Tom Gilbert continues to provide his coach with solid minutes, and I can't say I blame Michel Therrien for giving Gilbert the most minutes out of any defenders last night. The numbers simply don't lie in Gilbert's case, when he's on the ice the puck is mostly found in the offensive zone, which is definitely the best way to help your team win. Gilbert's active stick was also on display, as he broke up multiple attempts by the Red Wings to gain the defensive zone via controlled entries.

Mike Weaver and Jarred Tinordi were the only defenders who finished with a negative Corsi number, although it's worth mentioning that Tinordi looks very comfortable on the ice, and is making fewer errors when it comes to simple plays.

Of course, none of these quality performances would have mattered if not for Carey Price keeping the Canadiens in the game early. He's surely used to the Canadiens' slow starts by now, but despite his mediocre statistics, he's done a fantastic job all year keeping the Habs within a goal of their opposition, which has led the way to most of the early-season comebacks.

There are three things I want to touch upon before concluding this recap. The first, is that personally I find Canadiens/Red Wings match-ups to be among some of the best hockey to watch all year. There's no ugly stuff, no drama, just top notch hockey.  It's a real treat to watch for the fans.

Secondly, yes, the referees were bad. They missed several penalties, but such is life in the NHL. The referees aren't 'out to get' Montreal, nor are they there to help them. If the referees are performing badly, it's not due to a conspiracy towards your favourite team, it's best explained by simple incompetence.

Yes, Carey Price initiated the contact, and yes that may not seem fair, but by the letter of the law it was the right call.

69.3 Contact Inside the Goal Crease - If an attacking player initiates contact with a goalkeeper, incidental or otherwise, while the goalkeeper is in his goal crease, and a goal is scored, the goal will be disallowed.

If a goalkeeper, in the act of establishing his position within his goal crease, initiates contact with an attacking player who is in the goal crease, and this results in an impairment of the goalkeeper’s ability to defend his goal, and a goal is scored, the goal will be disallowed.

If, after any contact by a goalkeeper who is attempting to establish position in his goal crease, the attacking player does not immediately vacate his current position in the goal crease (i.e. give ground to the goalkeeper), and a goal is scored, the goal will be disallowed. In all such cases, whether or not a goal is scored, the attacking player will receive a minor penalty for goalkeeper interference.

Carey Price might understand this rule better than anyone in the league, because he'll exploit it any opportunity he gets. He protects his ice with ferocity, and frankly I can't blame him for understanding the rule book better than most.

Admittedly, it was a fantastic backhander by Datsyuk, who is an absolute joy to watch play hockey. I'm glad that he was still rusty when he faced the Habs, because he's practically impossible to contain once he gets going.

Montreal may not be winning their games in a convincing manner, but when it comes down to it they're 6-1, and sit on top of the league. This team might be something special in the making, but the season is way too young to come to any conclusions, or start day dreaming. What I do know for sure, is that the team's PDO isn't abnormally high, and their underlying analytics are encouraging.

That being said, despite their strong debut to the season, the Canadiens can improve several aspects of their play, which is incredibly encouraging for all the Habs fans that are enjoying their team's best start since the late 1970's.