Having finally suffered the ignominy of a first preseason loss, can the Canadiens' pared down lineup keep pace with a NHL powerhouse?

Share All sharing options for: Canadiens vs Blackhawks game preview

After three consecutive come-from-behind victories, something had to give. On Sunday, it finally did.

The Canadiens came within a Joel Ward goal, 90 seconds from the end of regulation, from taking the Capitals to overtime, relying on a staunch performance from Carey Price to get as far as they did. The Habs struggled to maintain the offensive presence they had earlier in the preseason, putting only 18 combined shots on Justin Peters and Braden Holtby. With one of the NHL's fastest and most dangerous teams ready to host, the Canadiens won't have much time to turn things around. 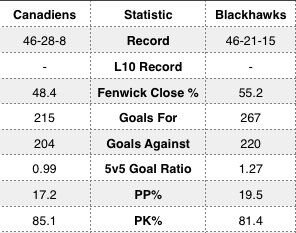 The Blackhawks are one of the twin titans of the NHL west, a mantle they share with the Los Angeles Kings. A possession powerhouse and perennial contender, the Blackhawks made a couple of important off-season adjustments. With considerably less drama, they accomplished a similar feat to that of Marc Bergevin, locking up their star players for the foreseeable future. Next, they grabbed some cheap depth in the form of Brad Richards, inking him to a $2M deal. The PEI native may have been out of his depth as a number one centre, but given offensive zone starts and competent linemates, Richards was still a 50 point player. The former Conn Smythe winner doesn't solve the Blackhawks depth problems at centre, but amidst what is already a lethal offensive group, Richards will be another threat.

Finally, the 'hawks also made some nice, low-risk moves, managing to turn Brandon Bollig into a third round pick and lining up a replacement in the younger Brandon Mashinter. Tonight will also be an opportunity to see the highly-touted Teuvo Taravainen in action, as the Finnish first-round pick (2012) is making a final push to earn a spot in the big leagues.

When the Chicago Blackhawks squared off with the Montreal Canadiens as the 2013-14 season began to draw to a close, fans of each team were treated to some of the best hockey of the year.

Even in the absence of star players like Patrick Kane, Jonathan Toews, and Carey Price, the Habs and Hawks played a track meet that featured 5 goals in the last 12 minutes or so of the game. A late defensive breakdown cost the Habs the win, but one couldn't help but think that all 82 games should look like last April 9 did.

If you pretend that Max Pacioretty wrist shot near the end finds twine instead of iron, the highlights aren't a bad way to spend four minutes.