After suffering two ignominious losses at the hands of the Panthers, can the Habs finally tame the Cats?

Share All sharing options for: Canadiens vs. Panthers - Game Preview

In 2012-13, the Montreal Canadiens were unbeatable in Florida. Whether their opponent was the Panthers or the Tampa Bay Lightning, the Habs came out on top each and every time. The Canadiens have proven able to hold their own against the Lightning again this season, but the Panthers have been a whole other story.

The Canadiens have lost twice to the Panthers, and in each case, have basically failed to compete. The first time around, the Habs played a struggling squad missing their best forward. Nonetheless, the listless Habs were mauled by their adversaries, and flattered by the final score of 2-1.

About two weeks later, this time on the Panthers' ice and with Jonathan Huberdeau back in the lineup, the Habs managed to carry a little bit more of the flow of the play. Of course, that didn't stop the Cats from doubling up the Canadiens on scoring chances, and taking a 4-1 win over the Habs.

Now, the Canadiens will face their sternest challenge of this saga: the Panthers, minus none of their first liners (Scottie Upshall missed the last affair), and riding their hottest streak of the season.

While the standings show that the Panthers are still nine points back of a playoff spot, their play has improved steadily as the season has progressed. Florida has produced more shot attempts than their opponents with increasing frequency, and while their schedule hasn't exactly lined them up against the toughest of the tough, the Panthers have crushed their recent opponents. Here's Florida's rolling fenwick over the last 10 games: 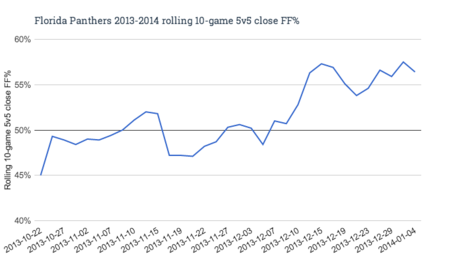 Basically, the Panthers have decided to turn into LA Kings light, for a month.

As we all remember, however, possession was never really the Panthers problem. Recent solid play aside, the Panthers were good at even strength before they played the Habs the last two times, too. If anything makes the Panthers scary, it might be that they're starting to get some good goaltending, too.

Florida signed Tim Thomas out of his self-imposed solitude to shore up their goaltending situation, but for the earliest portion of the season, he was little more than a punchline. Over the past month, he's been significantly stronger, registering quality starts in four of his last five starts. If Timmy gets another start over Scott Clemmensen, and can put forth another solid effort this evening, the Habs could be in serious trouble.

Thankfully, the Panthers main weakness remains in force, as the Cats are terrible on the powerplay. Their production to-date puts them last in the league, and they have scored but a single goal in their last sixteen attempts. Montreal, conversely, has been one of the league's stronger teams on the powerplay this year, and they've needed it, too. Montreal's powerplay has accounted for more than a quarter of the team's total goals this year.

The pillar of the Canadiens' man advantage acuity is P.K. Subban, where he pairs with Andrei Markov to form a lethal blueline duo. Michel Therrien seems to have realized what he is in the pair recently, or perhaps how little he has in his other options. In the Habs game against Ottawa, Subban and Markov were on the ice for 84.8 and 71.9 percent, respectively, of Montreal's total powerplay time. No other defenceman played more than Francis Bouillon's 28.1%.

Finally, if there's any individual player who has the potential to swing this game, it may be Canadiens goaltender Carey Price. Price hasn't seen the Panthers yet this year, as Peter Budaj has suffered each of the Habs' two losses to Florida this year. Price has been one of the league's best goaltenders this year, and has been quite good (12-6-3, .933, 2 SO) against Florida in his career. C3P1 is responsible for a good portion of the Canadiens wins this year, and he might be the Habs most potent weapon in seeking another one tonight.

As usual, gameday coverage from the Florida side is available at Litter Box Cats.