Try as they might, Canada could not overcome a fantastic game by the Russian netminder.

Canada had not missed the podium at the WJC in consecutive years since they started the 'Program of Excellence'. Russia beat them last year in the bronze game, as Russia has never lost in a bronze medal match-up.

Something had to give.

An early penalty to Bo Horvat gave Russia the first sustained pressure of the game. An innocent Grigorenko pass deflected off Matt Dumba's skate, and beat Fucale to give Russia the 1-0 lead.

It's no surprise that Canada gave up the first goal. They only managed to score the first goal once in this tournament, vs Switzerland.

Anyone that has watched the games during the WJC will testify that Matt Dumba has had a brutal tournament, and the unintentional own-goal is a great example of how these games have gone for the young Minnesota Wild defenceman.

The best line in the early goings was once again Horvat-Reinhart-Laughton, as they were the only line that created good scoring chances in the first 10 minutes. Vasilevski, one of the best goalies in the tournament, shut the door on several occasions.

Russia responded with a few good shifts of their own, however Fucale was equal to the task. 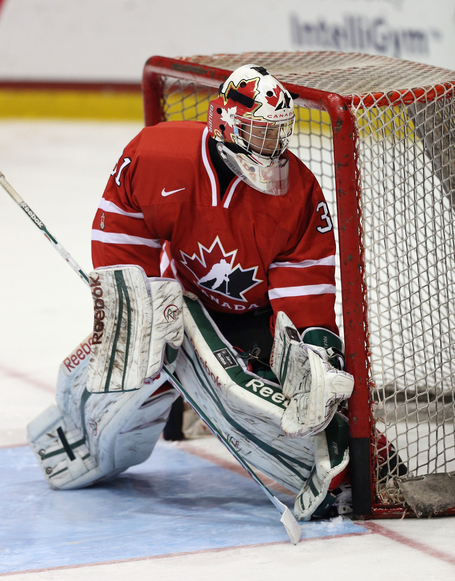 Matt Dumba almost gave away a breakaway, however he recovered quickly to deny the scoring opportunity.

The Mantha-Drouin-Hudon line managed to create several opportunities, as Habs prospect Charles Hudon kept the play alive several times, and allowed Mantha and Drouin to connect for a shot from the slot that Vasilevski saved.

Curtis Lazar then delivered perhaps the hit of the tournament, plastering a Russian d-man. A classic shift for Lazar, as he has done an exemplary job at providing energy and intensity for Team Canada.

Shortly thereafter, Gimatov, a rarely used Russian forward, beat Fucale with a goal over the shoulder after capitalizing on a Canadian turnover. Fucale will definitely want that one back, as it was definitely a weak goal, albeit a reasonably good shot.

Things were looking grim for Canada, as Vasilevski is not known to give up a plethora of bad goals.

A too many men penalty on the Russians led to a Canada powerplay with 1:52 remaining in the first.

Horvat-McDavid-Reinhart took the first shift of the PP. Russia was very aggressive on the penalty kill, and Anton Slepyshev cleared the zone on a Morrissey miscue.

Jonathan Drouin had several good scoring chances on the ensuing PP wave, which culminated with the young Halifax Mooseheads forward hitting the post.

Russia took a 2-0 lead into the first intermission, however I should note that Canada responding quite well to the Russian goals, especially the Hudon-Mantha-Drouin line. However Charles Hudon's efforts were not rewarded, as he was removed from the PP in favour of Leier, who is not having a great tournament by any means. At least Hudon is creating 5 on 5 opportunities. It's just a shame that he's not put into a position to benefit from that great work 5 on 5.

It's also worth noting that despite being beat by Matt Dumba's skate, and allowing a goal on a shot he could have saved, Fucale did make several nice saves during the period.

How are the Habs' prospects doing at the WJC?

Check out our live updating stat sheet on every Canadiens prospect at the 2014 World Juniors, including game-by-game scouting reports on their progress.

How are the Habs' prospects doing at the WJC?

The second started with a shortened powerplay for Canada, but like many poweprlay's that span two periods it petered out relatively quickly.

Once again the Hudon-Mantha-Drouin line created a scoring chance, but it was starting to be apparent that it would take a perfect shot to beat Vasilevski.

A Russian penalty sent Canada back to the powerplay, in what was looking like a 'must score' opportunity, albeit with plenty of time on the scoreboard.

During this powerplay, Nic Petan replaced Charles Hudon, since Hudon is Rodney Dangerfield in Sutter's eyes.

Russia was given the next poweprlay on a Griffon Reinhart hold. Scott Laughton pounced on a loose puck to streak in for a shorthanded chance, but Vasilevski was equal to the task. Once again Russia was caught with too many men on the ice, as they seemed intent on playing with an extra player during various times during this game.

Derrick Pouliot had the best scoring chances of the man advantage for Canada, but an Aaron Ekblad tripping penalty on the recently penalized Russian who was leaving the penalty box, which could have easily been a penalty shot, brought the Russians back to the poweprlay. Fucale denied a couple chances, as we approached the mid-way point of the game.

Charles Hudon was involved in several more scoring chances in the following minutes, but Vasilevski reminded Canada why he's NHL bound in the near future. Both Ekblad & Hudon were stuffed, and Dumba missed a glorious opportunity from about 4 feet out. 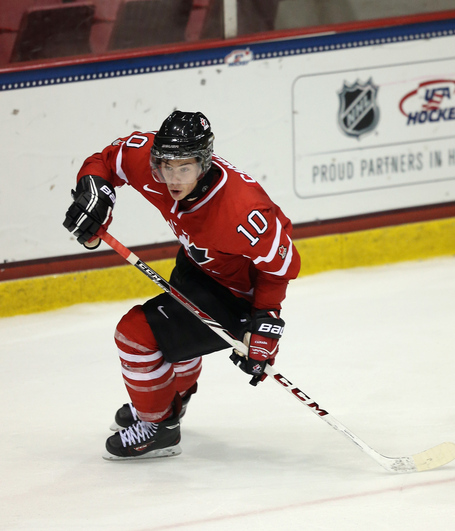 Aaron Ebklad hit Canada's second post of the game on an innocent shot, but the Canadians were clearly not going to score via puck luck in this game, they would have to do better.

Bo Horvat fanned on a great scoring chance, as Canada tried to ramp up their pressure.

A well deserved Charles Hudon crosschecking penalty destroyed any momentum, however Canada's penalty kill rose to the occasion, and shut down the Russian man advantage. The best scoring chance came from Anton Slepyshev, but Fucale was the better man in the exchange.

Once again the Hudon-Mantha-Drouin line was creating a plethora of scoring chances. They were clearly Canada's best line today.

Sam Reinhart tried to find his brother on an ensuing play, but Griffon whiffed on the shot, which is unfortunate as it would have been a sure goal had contact been made.

Pavel Buchnevic dangled the pants off of Pelech, which led to a Russian man advantage to end the period.

Russia maintained their 2-0 lead heading into the third period.

A quick Curtis Lazar shot led to a dangerous scoring chance for Canada, but the puck trickled wide. Canada would have to score early on Vasilevski if they wanted any chance of tying this game.

Canada maintained their pressure with a strong shift by Hudon-Mantha-Drouin. This led to Russia taking a penalty and Canada was off to the powerplay.

Not for nothing, Canada peppered Vasilevski with shots, but the Russian net-minder showed great poise, stopping every opportunity without wasting any extra energy. His positioning was immaculate. Derrick Pouliot put together one of his patented blueline dangles, yet was unable to beat the goalie.

On an ensuing Russian drive, Fucale made a great save on a Barbeshev from point blank range, keeping his team in the game.

Habs prospect Charles Hudon took matters into his own hand, keeping the play alive on the following shift, and assisting on Josh Morrissey's goal. Hudon has created scoring opportunities every single time he was on the ice, and this shift was no exception. Maybe Sutter will give him some PP time now that the tournament was 12 minutes away from being over.

You can watch the goal here.

Hudon almost tied the game on the following rush, but he hit the side of the net. This was followed up by a great shift by Hudon's line, which resulted in great sustained pressure, but Canada could not capitalize on it.

Russia then produced their third (!) too many men on the ice penalty, and the opportunity couldn't be better for Canada.

Of course, Hudon was left off the powerplay, again, in favour of Nic Petan. Canada failed to convert, as the clock showed 8 minutes remaining in the game. Crunch time for the Canadians.

The next two minutes were played in the Russian defensive zone, as Canada threw everything they could on net. The Russian defenders scrambled as the pressure mounted.

As usual whenever a team applies extended pressure, a few defensive lapses occurred, and Fucale was forced to make several nice saves on Slepyshev, Barbeshev & Grigorenko.

Canada returned to the attack, however they were unable to generate much traffic in front of Vasilevski.

Charles Hudon, having the best game of the tournament, then intercepted a pass in the defensive zone, which brought on a Canadian rush. This led to a Russian icing and more sustained pressure by Canada.

With one minute left Fucale was pulled in favour of an extra attacker (Horvat), but Canada was unable to convert.

For the first time since 1981, Canada has gone back-to-back years without a medal.

They possibly deserved a better fate today, but Vasilevski played a great game.

The game summary is available here.

Canada can't keep sending plugs to the WJC. When you are formulating a team over an 82 game schedule it makes sense to find roll players, plus you are limited by a salary cap.

Hockey Canada is only limited by their own lack of logic.

Leaving high scoring players at home (Brown, Poirier, Domi, Dal Colle) is silly. Simply silly. Especially if it's due to bringing lower echelon players like Gauthier, Rychel, Anderson and Leier. Those players are good, don't get me wrong, however they're not good enough to make up for the discrepancy in talent compared to the players that were left home.

Hockey Canada is obsessed with grit, intensity and other intangibles, while the rest of the world clearly sends the best players available, as logic dictates. If Canada would send their best players I have no doubt they wouldn't struggle to score as much as they did during this tournament.

Canada has up to 11 players they can send back to the WJC next year, and if they pick the right players they should be considered favourites to medal. However long gone are the days of 5 back to back gold medals. It's not that Canada has lost a step, it's that the rest of the countries involved have continued evolving, whereas Hockey Canada has stood by, failing to evolve at the same rate.

Let's just hope that the CHL doesn't over-react like they did last year with the European goalies. Maybe they should take a long look at their own selection roster, and perhaps even try to figure out why European nations are producing better WJC teams.

This 4th place finish (which isn't as bad as Canadians tend to make it) shouldn't be blamed on the players, but rather the management that decided to bring a weaker roster that placed more important on grit and other intangibles rather than elite talent.