With their streak of losses to Ottawa at four, can the Habs finally take one back from the Senators?

Share All sharing options for: Canadiens vs. Senators - Game Preview

It's been almost eight full months since the Ottawa Senators eliminated the Montreal Canadiens last spring, and that playoff series is starting to become a distant memory. Since they last beat Ottawa last year, in Game 2 of their five game series, the Canadiens have had five opportunities to beat the Senators. While a preseason victory may be mildly satisfying, Montreal has been unsuccessful in their four regular season and playoff attempts. Tonight, they get another chance to rectify the situation.

This isn't the same Montreal team that faced the Senators, and their opponents have changed as well. The Habs, a consistently strong possession team through all of 2012-13, have fallen quickly in 2013-14. Thankfully, goaltending, special teams, and the heroics of a few key players has kept the team afloat.

The Senators have experienced a similar drop in their possession numbers, but unfortunately, haven't received the same benefit from their goaltending that the Habs have. After putting himself in the Vezina conversation last year, Craig Anderson has struggled mightily. Anderson skated to a league best .943 even strength save percentage last year, but this year, has managed only a .922. The latter mark is exactly what Peter Budaj has accomplished so far this year.

Despite their troubles, the Senators have stabilized somewhat over their recent schedule. Taking advantage of a weaker schedule, the Senators have maintained traction in their possession numbers for some time now. Over the past three games, they've begun to sink into something of a minor rough patch, but they've won all three anyway. Extra Skater illustrates this phenomenon quite nicely: 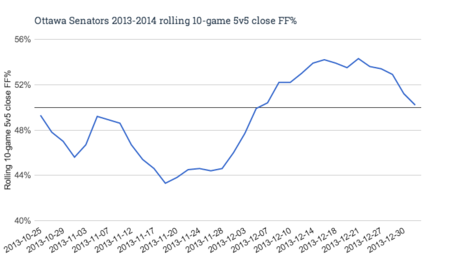 One of the keys to Ottawa's recent success has been the creation of a second, successful line to back up the dynamic trio of Bobby Ryan, Kyle Turris, and Clark MacArthur. Citing the need to generate some secondary scoring, Paul Maclean united Cory Conacher, Milan Michalek, and Mika Zibanejad. Played in an exploitation type of role, with lots of offensive zone starts, the group has been dominant on possession, and has proved able to generate some offence, as well. If Michel Therrien keeps Lars Eller, Alex Galchenyuk, and Brandon Prust together, they would likely be good candidates to try to counter Ottawa's second line.

With the two top lines set, the Senators are left with an intriguing situation in the their bottom six. Recently injured, it appears that Jason Spezza is ready to return. Where things get interesting is when it becomes clear that Spezza's old spot, right around where Mika Zibanejad is skating now, is no longer available to him.

Some pundits have begun to speculate that Ottawa may prolong Spezza's absence, giving him time to make sure that he is 100% recuperated while also allowing a potential lineup slot for the Senators captain to show itself. However, when the trade off is between a dangerous sniper and Matt Kassian, it's difficult to imagine that Spezza would be held out. Other benefits, such as relieving Spezza of some of the possible self-imposed stress of carrying the team, may also be realized by slotting him in on the third line.

Spezza's presence may create a matchup problem for Montreal. After all, we all know what Spezza is capable of when played against defencemen who lack agility.

All you have to do is substitute Douglas Murray for Sheldon Souray, and the frightening visual is complete. (EDIT: We have our answer; Spezza is scratched.)

So, with Ottawa having shown that they can be a good possession team again against largely weaker competition (they handled themselves pretty well against the Blues, too), the Habs may have to turn to the advantages that they generally rely on.

Foremost among those advantages is Carey Price, who will start opposite Anderson tonight. Price offers the double whammy that is his success this season and his historic success against the Sens. C3P1 has a 14-6-3 record against the Senators, which pairs nicely with a .925 save percentage and three shutouts. Ottawa allows more goals per game than almost any other team in the league, so Carey's ability to shut down the offence they rely on to win will likely be key to tonight's outcome.

Finally, the Canadiens have made a couple of notable lineup adjustments. The first, involuntary, change is that Daniel Briere will join the lineup in place of Ryan White. White was injured in the Canadiens last game at Dallas. The second, apparently voluntary (and totally ridiculous) adjustment, is that Raphael Diaz has been named a healthy scratch. Assuming that Emelin and Gorges do not play together, this means that one of Murray or Francis Bouillon will play in the top-4 this evening. Based on what we know about the pair of dubious defenders, pressure on Carey Price will likely increase exponentially this evening.

If you're interested in game-day coverage from across the Ontario border, Silver Seven has you covered. Otherwise, rest assured that no Ottawa skater figured into current events in hockey this week.