Trade rumours are usually silly. So let's embrace the crazy.

Mike Chambers from the Denver Post suggests that there are reports that Pierre-Alexandre Parenteau might be dealt to the Habs in exchange for P.K. Subban. But wait! It's obviously not a one for one swap. He suggests that Colorado would either add picks or prospects to even out the deal.

Parenteau, 30, has been rumored to be on the trading block, with some reports saying the Montreal Canadiens might give up defenseman P.K. Subban for Parenteau and prospect(s) or draft picks. Subban, 24, is a 2014 Team Canada Olympian who is scheduled to become a restricted free agent and will command a salary in excess of $6 million next season and beyond.

As noted by Chambers, Subban will receive in excess of $6M next year, so acquiring the $4M Parenteau is obviously a logical solution to that conundrum that cannot be solved. How the heck will Montreal find $2M in cap space to sign Subban?

Let's forget that Subban is an elite 24 year old Norris winning defenceman for a minute. The type of player that takes decades to replace. Let's go completely nuts and explore the moving parts surrounding that rumour for a moment.

What type of picks would compensate for the discrepancy in talent between the aforementioned players?

How many first round picks are teams allowed to trade anyhow? Let's just assume it would take the maximum allowed by the current CBA.

Would a handful of mediocre 1st round picks (Colorado currently sits in 3rd in the West) be worth it? Maybe. By getting rid of the best d-man Montreal has had in 20 years they would assuredly improve their own draft picks, and could potentially be in the mix for Conor McDavid at the 2015 draft.

Smart move? I'd definitely consider it ....if playing NHL 14 on the Xbox, no doubt. Aaron Ekblad is an interesting option as well, and Montreal would probably have a good chance at him if they were to trade Subban for 55 point winger who is on the bad side of 30.

The other option presented is Parenteau plus some prospects for Subban. Can we still consider Nathan MacKinnon a prospect? If so, things get interesting. It still leaves a gaping hole on the blue line, but MacKinnon would look great on a line with Pacioretty and Gallagher.

Neither of those deals will ever happen, nor will the one proposed by Chambers, but sometimes it's fun to go full Gonzo.

If you were the Habs GM, what type of return would you look for Subban? Pretend that for some insane reason you would trade him in the first place, considering he's an RFA at the end of the year. Not to mention that Subban is currently outscoring Parenteau by a wide margin this season.

Basically, pretend you are Mike Chambers. Logic need not apply. 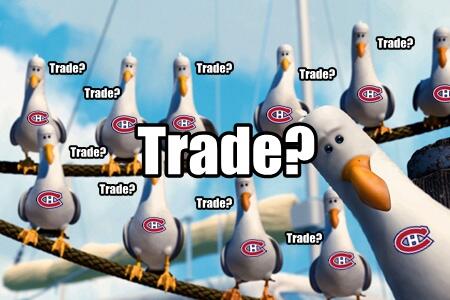