Breaking News Submit your ballot for our annual player ranking

Tomas Plekanec has been overlooked by experts around the league for a very long time. This time may be over this season, as a standout performance against the Chicago Blackhawks two weeks ago has raised the question whether Plekanec should be considered a legitimate Selke trophy contender.

One of the most underrated forwards of today's NHL, Plekanec finished without a single vote in the 2012-13 Selke trophy voting while guys like Adam Henrique, Brandon Prust and Eric Fehr (yes, no joke) were in. In previous seasons, Plekanec appeared on some of the ballots, but he has never been able to crack the top 10. Here are his past voting results:

I was curious if Plekanec is so underrated that he is simply overlooked or if he isn't able to put up the same kind of performances like Patrice Bergeron, Jonathan Toews and Pavel Datsyuk on a regular basis.

So, this will not be an article on "Why Plekanec is a Selke contender", it is an objective comparison of likely contenders. I wanted to know if Plekanec is able to compete with those players, looking at different key statistics which are considered most important for defensive play.

I included 17 forwards from around the league who have been successful in last year's voting or who excel in certain defensive categories:

We're going to look at different categories, awarding points and choosing the winner on a strictly by-the-numbers basis. If not noted otherwise, all relative statistics only include even strength play.

I'm refusing to give plus/minus any consideration, as it is probably the weakest and most biased stat to determine a player's defensive abilities. It depends heavily on the team's success, offensively, defensively and in terms of goaltending. The most important weakness, however, is that there is no relative plus/minus value. For this reason, we will stick with relative GF%. 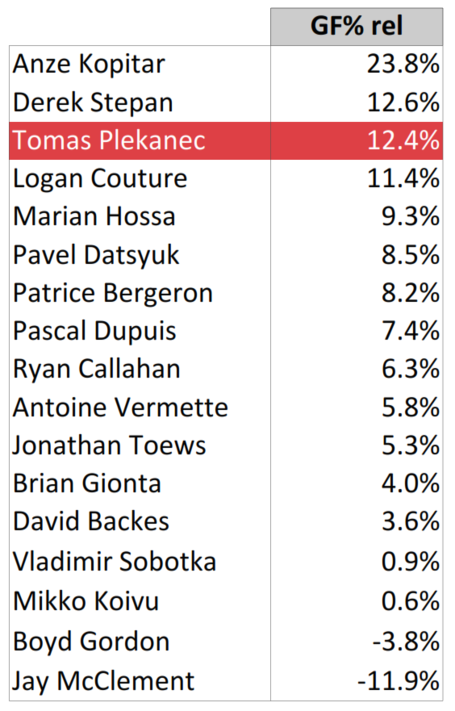 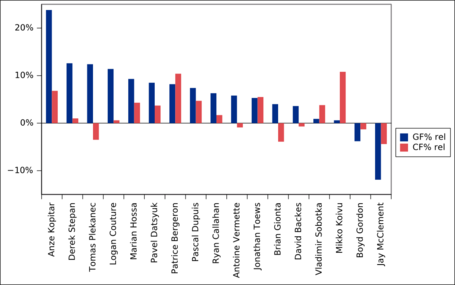 Anze Kopitar is clearly leading the league in this category. When he is on the ice, his team scores nearly three times more goals than it allows. Playing for one of the better teams in the league, this still leads to an incredible +23.8% relative value, third in the league to only Thomas Vanek and Jiri Hudler. Derek Stepan and Tomas Plekanec are the runners-up. Note that both of them don't have great plus/minus stats, but they apparently still drive their team's scoring and defensive play.

Winning faceoffs is an important, though sometimes overrated, part of a forward's defensive ability. Patrice Bergeron and Jonathan Toews have been dominating the league over the last two years, but Blues forward Vladimir Sobotka has stepped up to take the lead so far this season. 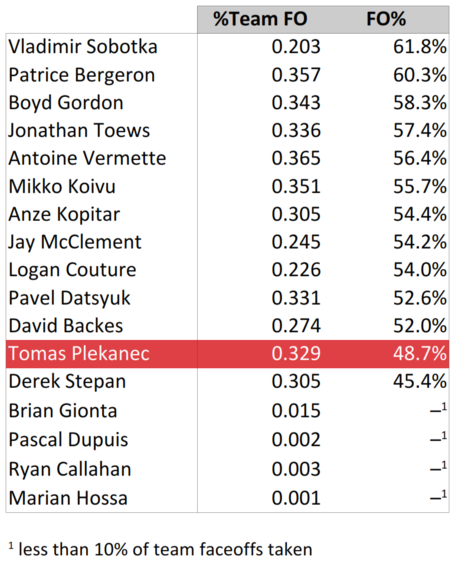 Patrice Bergeron is still a beast in the faceoff circle. But Toews and – surprisingly – Edmonton's Boyd Gordon are no fluke either. Faceoff percentage will be one of the tougher categories for Tomas Plekanec, one of only two centermen to post a success rate below 50%. That's not a very good sign considering NHL voters pay much attention to this category.

It's a very simple equation: A takeaway leads to a scoring chance for the own team, a giveaway generates a scoring chance against. For some reason, the voting panel seems to pay a lot of attention to this stat every year, and Pavel Datsyuk has been among the league's takeaway leaders for many seasons now. To include both takeaways and giveaways, we will just determine the takeaway/giveaway ratio. 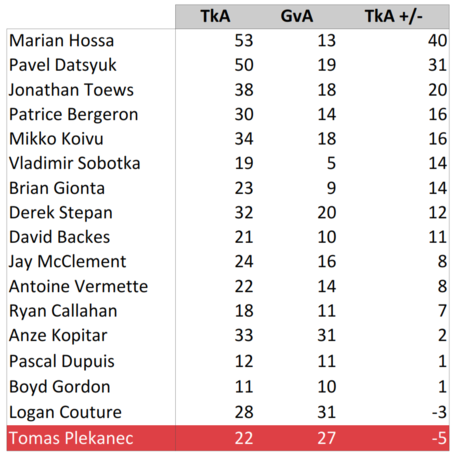 Datsyuk and Chicago forward Marian Hossa lead the league in the total number of takeaways. However, Hossa edges out the three-time Selke winner due to an inferior number of giveaways. Again, this category will hurt Plekanec's chances of being nominated significantly, producing 27 giveaways and only 22 takeaways.

A top-tier defensive forward is carrying his team's penalty kill. On the other hand, a forward without shorthanded playing time won't be considered a serious candidate for the Selke Trophy. Unfortunately, I have not yet come across a statistic that shows individual success on the penalty kill, so we will just stick with relative time on ice. 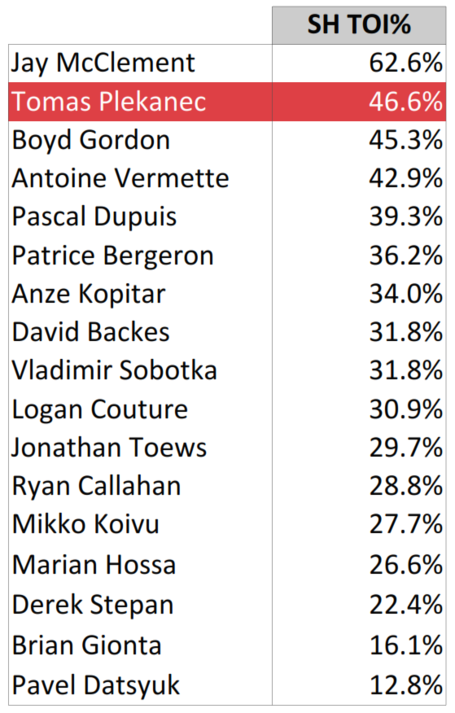 Only Toronto's Jay McClement, who is on the ice for nearly two thirds of his team's penalty kill time, is relied on more heavily by his team than Plekanec. However, Montreal has a much more successful penalty kill than Toronto at 86.1% and 77.5%, respectively. You should note Plekanec's league-leading three shorthanded goals as well. Players like Pavel Datsyuk and Marian Hossa, however, are barely used when being down a man.

Possession is a key factor to defensive play, as it naturally generates less shots on goal against. However, as Corsi is highly dependent on a team's system, we will look at relative numbers to identify standout players and those who just ride their team's success. 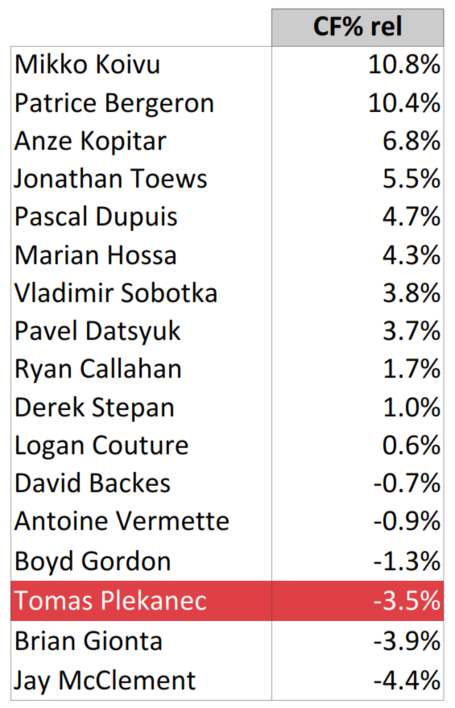 Mikko Koivu is the most successful driver of his team's possession with a league-leading +10.8% relative Corsi. However, Patrice Bergeron's incredible +10.4% while playing on one of the strongest possession teams in the league should be noted even more. Toews and Slovenian possession monster Anze Kopitar average over +5% as well. Plekanec, however, is not the strongest possession player in the league and is even 3.5% below Habs average. You might discuss whether this is his fault or Michel Therrien's.

A top defensive forward plays a lot of tough minutes, receiving the majority of his starts in the defensive zone and still carrying the team's possession. Contrarily, a high share of offensive zone starts indicates a player being sheltered. 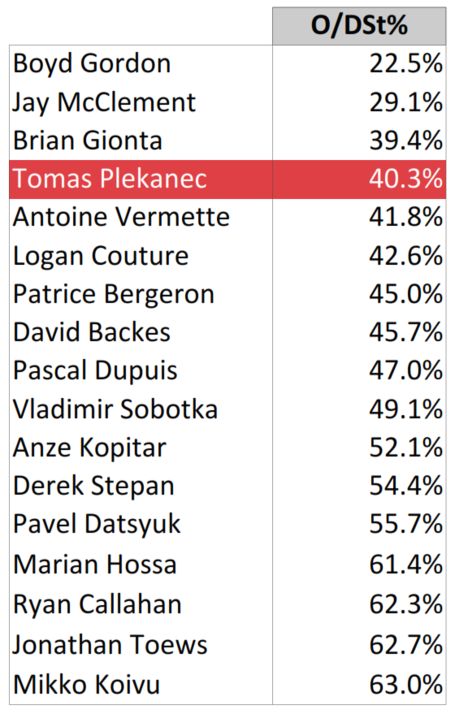 Boyd Gordon receives the third-toughest zone starts in the league, 56.4% of them in the defensive zone. McClement is second in the group, followed by Gionta and Plekanec who both have an offensive/defensive zone start ratio of around 40%. That's pretty tough for a first-line center like Plekanec. On the flip side on the rankings, we surprisingly find Jonathan Toews, who's playing an extremely sheltered game with only 20.8% of his starts in his own zone. You may ask how much of his time he does actually spend defending.

Quality of competition is a very significant, yet underrated, factor to be taken in consideration. It's not worth very much shutting down Buffalo's fourth line, and a top defensive forward has to be able to compete against world-class players like Sidney Crosby. By the way, Plekanec shut him down very effectively. Just sayin'. 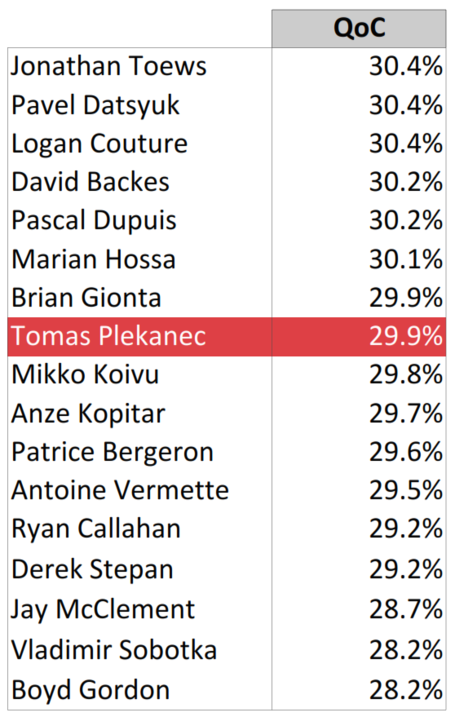 To balance his high amount of offensive zone starts, Toews faces one of the toughest competitions in the league and leads our group alongside Pavel Datsyuk and Logan Couture. Plekanec and Gionta keep a solid position in the middle of the chart. Surprisingly, McClement and Gordon, who play on two of the weakest teams in the league, also face the weakest opponents. 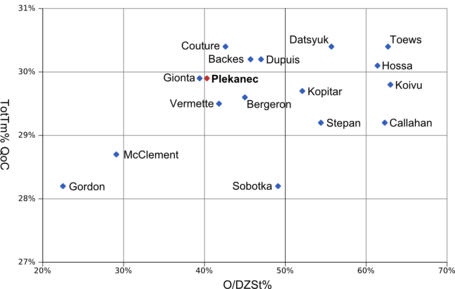 Patrice Bergeron is leading all the way and it's not even close. At this point of the season, he seems to be the unanimous choice to win the Selke trophy, which would be his second in three years. His key to success is a standout coverage of all aspects of the defensive game, ranking top 6 in all categories except quality of competition. He especially excels in terms of possession, but also in the faceoff circle.

However, there will be much more controversy who should be among the other candidates. If we exclude the blocked shots category, Jonathan Toews is the runner-up despite his poor amount of defensive zone starts and his limited usage on the penalty kill. However, he is a top-4 player in both faceoffs and takeaways while facing the toughest competition. Anze Kopitar and Pavel Datsyuk don't come surprising as well at the number three and number four spot.

However, it's not David Backes or Marian Hossa following. It's those forwards who finished outside the top-15 last year or didn't even make it on a single ballot: Logan Couture, Antoine Vermette and Tomas Plekanec.

Where will Plekanec end up? 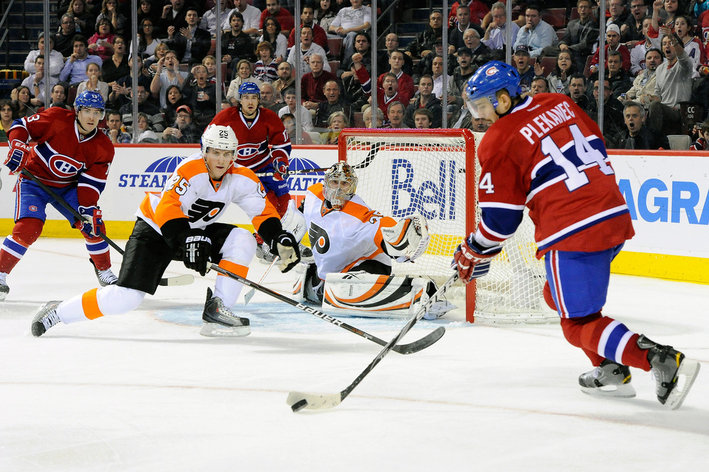 So, it's hard to imagine Plekanec will get snubbed again. As pointed out above, Plekanec is by far the most successful penalty killer of the group, leading Montreal's top-5 shorthanded play. He is used in mostly tough situations, racking up a high amount of defensive zone starts against high-quality competition. Taking into account his +12.4% relative goals for percentage, he looks like of of the league's best shutdown forwards, which he actually is this season. However, there are categories that will hit his chances of receiving a high number of votes at the end of the season. Two of the most important aspects that the voters will look at are faceoffs and takeaways. Seriously, don't ask me why, but they will. And it just happens to be that Plekanec is not a very strong performer in either of them.

To conclude, Plekanec is definitely a serious contender if you look at the whole picture. There are people who overlook advanced stats, and they will see his 48.7% faceoff percentage instead of his ability to play big minutes defensively. They will criticize his 27 giveaways rather than praising his +12.4% relative goals for percentage.

Again, the voting results will give us an indicator of how old-fashioned the voters will make their choices rather than who are the best defensive forwards in the league. In the past, votes for established Selke candidates and leading plus/minus players instead of complete defensive forwards have raised questions whether these journalists really take a look at the whole game. That would actually be great. Some may not believe it, but there are great defensive forwards who don't appear in the top-10 of the plus/minus rankings. I hope this will finally be realized this year. It would be a huge step forward.