Canadiens vs Hurricanes recap: A win is a win, but still trending down

After breaking a streak of futility with a shutout win, should fans be hopeful of a turnaround?

Share All sharing options for: Canadiens vs Hurricanes recap: A win is a win, but still trending down

Tuesday night's game against the Hurricanes was a confusing one. On the surface, a 3-0 win over a team that's been on a hot streak looks like a statement game after a string of pathetic losses, but digging deeper, the Canadiens were outplayed in every single game situation, until they pushed back in the third period. Score effects play a major part in being outplayed in the second period, but as you can see in the Fenwick chart, outside of a little push to end the first period and another in the third, Carolina held the edge in play all game long.

So once again, we're back to the Canadiens getting lucky, and Carey Price stealing games. That's better than what we've been watching for the last few weeks, but still not inspiring, and not predictive of a turnaround in this team's fortunes. Eventually, if they want to win, they have to start outplaying teams.

Montreal is currently on a 94 point pace throughout the entire season, but since December 10th, that pace has crashed down to just 82 points, from a previous pace of 104. We've been attempting to drive home over the last two months just how dire the situation is, but the hot streak in November seems to have pulled the wool over the eyes of many fans.

Last week I compared Therrien's 2008-09 Pittsburgh Penguins to this year's Habs, and the results were staggeringly ugly. This is something I want to update on a weekly basis, so I added the games Montreal has played since, and this is what we get: 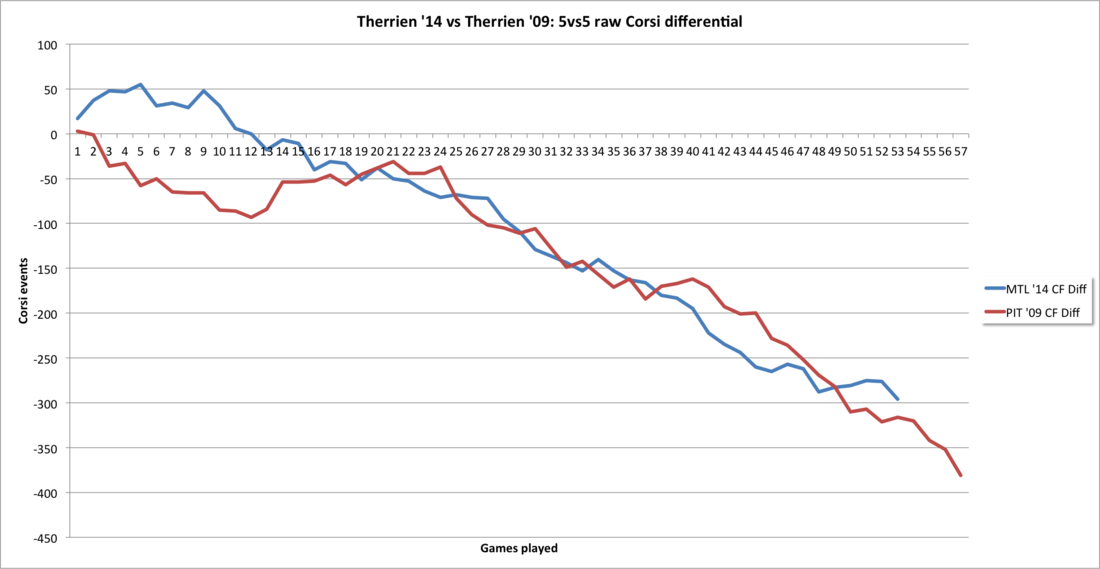 You might think that the blip out of the down trend is a positive sign, but most of that occurred during blowout games where the Canadiens were playing from behind for almost the entire game. Score effects were a major contributor, so I wouldn't give much weight to it. Being outshot by 20 attempts last night has them back on the downward trend, but to make this a little clearer, let's add trendlines. 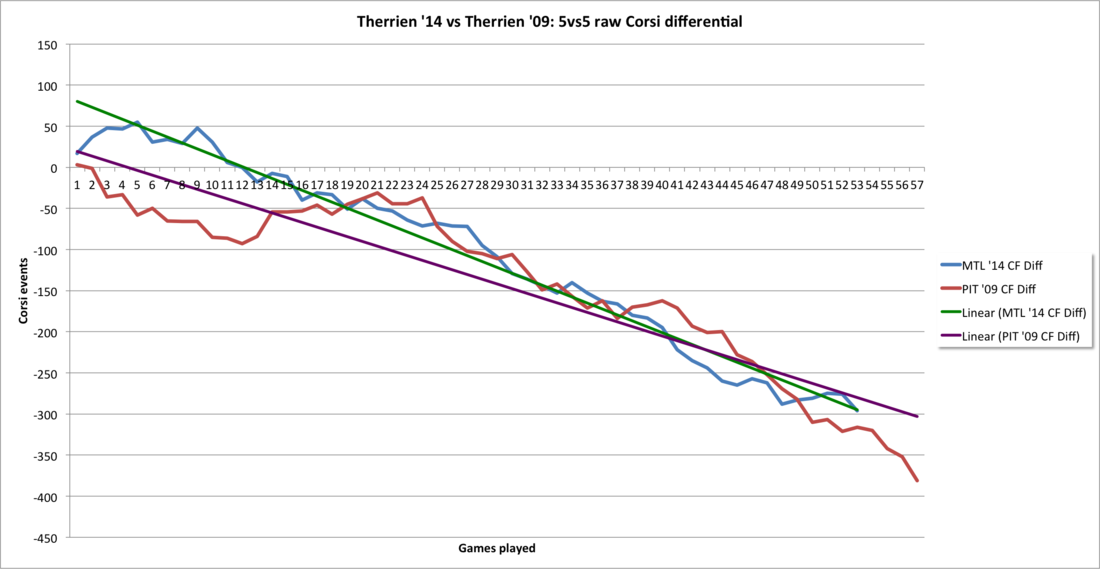 The green line is showing the predicted trend for this season, while the purple line shows the trend the Penguins were on in 2008-09 under Therrien. As you can see, the green line is a sharper decline, partially because the Canadiens started on a higher note, but the fact is, in order for the Canadiens to catch up to the Penguins when we're using total Corsi differentials, they had to be outshot by a wider margin.

In short, the Titanic is still en route to the iceberg, and no one at the helm is paying attention. Wins like the one against Carolina are going to happen from time to time with a team as talented as the Habs, with a goaltender as good as Carey Price, but unless the approach changes from a coaching staff that believes Douglas Murray is a positive contributor while being outscored 24-4 in 32 games played. Two players in the entire NHL have played as much as Murray has and have a worse goal differential at even strength.