An open letter to Marc Bergevin: It's time to do the hard thing, the right thing

Admitting a mistake is hard to do, but in this case everyone is going to understand. It's time to do the hard thing, the right thing, and move on from Michel Therrien.

Share All sharing options for: An open letter to Marc Bergevin: It's time to do the hard thing, the right thing

A graphical explanation for the importance of possession metrics, showing how difficult it is to make the playoffs without above average even strength play.

It's tough to give up on your first major move as a general manager. It probably feels like admitting failure, but that's ego, and it has no place in decision making. When you hired Michel Therrien, it's fair to say that I wasn't impressed. However when you got the job, the coaching candidates available were sparse, to be polite. Patrick Roy wanted too much power for a rookie GM to give up, so that was a no-go. Marc Crawford barely speaks French and is tied up in legal troubles that would have been a constant distraction, along with a terrible record, so there's no chance that happens.

You were left with essentially two options, promote a junior coach with zero pro experience, or hire Therrien, who had coached his last team to a Stanley Cup final. You chose Therrien, and who could really blame you?

Here's the thing though, Therrien is no longer the only option available. Your hands are no longer tied.

You may feel that you owe it to Therrien to make a trade to try to improve the roster. Judging from the media and a large portion of the fanbase, it seems like the main focus is to trade for size, while shedding a smaller player. Another Canadiens general manager bought into this thinking just a few years ago, trading Mike Cammalleri to Calgary along with Kari Ramo and a 5th round pick in exchange for Rene Bourque, Patrick Holland, and a second round pick that became Zachary Fucale.

Let's ignore the bit parts and look at the two NHL players exchanged there for a second.

I would go into possession metrics and the kinds of roles these two players are being asked to fill, but it only gets more depressing. The downgrade going from Cammalleri to Bourque is unbelievably obvious. Panic trades while your team is struggling rarely work. Just to clarify this, over an 82 game season Cammalleri has paced for 28 goals, 26 assists, 54 points, while Bourque has paced for 15 goals, 8 assists, 23 points.

There are obvious problems with the Canadiens roster, but it doesn't matter what you do to it right now, it won't get better with Therrien.

Venerable hockey analytics guru Benjamin Wendorf (follow him on twitter here) has been working on approximating possession numbers for teams before the 2007-08 season, when the NHL released play-by-play scripts with game states accounted for. After seeing the mighty collapse that the Canadiens have suffered this season he offered up his work on Michel Therrien, and it's ugly.

Michel Therrien been a part of a midseason coaching change four times, which offers us a great opportunity to look at the impact he had on rosters relative to other coaches. At SB Nation I wrote about changing coaches in season, and the impact is can have, with the main subject being Therrien after Dan Bylsma replaced him. Using Ben's formula, let's take a look at the four seasons Therrien has replaced someone else, or been replaced. (MT = Michel Therrien)

Keeping in mind that Olczyk was essentially completely unqualified to be behind an NHL bench and led the Penguins to inconceivably awful records, the fact that Therrien couldn't improve on his possession numbers with 51 games to work with is embarrassingly inept.

Outside of Olczyk Therrien's peers happen to be three very good coaches, but that should be the standard to which we hold a coach in Montreal, right? And they were all three rookie coaches, so it's not like we're comparing him to Scott Bowman here. Removing Olczyk from the sample yields an interesting result. 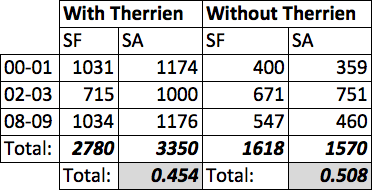 That is straight up ugly. The teams Therrien took over or was relieved from went from the top half of the league in possession on average to the level usually seen only from lottery teams. Remember that these numbers are in season replacements, meaning the coaches in question were working with essentially the same rosters.

Going a step further than singling out partial seasons, I added this current seasons' possession data into the spreadsheet that Ben passed on to me, which allowed me to graph Therrien's entire career as an NHL coach in rolling 25 game averages.

Looking at the graph, with the x-axis set at 50% possession, you can see right away by looking at the orange line that last season was the first time in his entire career that Therrien has been able to maintain positive possession for an extended period.

How did a coach who has been consistently far below average at getting his teams to outshoot opponents have his team so far above average for a 50 game period? Perhaps Therrien came into this job with new ideas, and they worked out very well with an extremely deep, talented roster.

Three scoring lines and a high end fourth line that could be used in tough minutes without giving up too much ground allowed Therrien to match up against any team in the East, and with the sixth highest even strength shooting percentage in the league, everything was running smoothly. As this season began, the Canadiens had a bought of poor shooting luck similar to their playoff series against Ottawa, and Therrien panicked.

Reverting to old habits, the possession system crashed, exacerbated by the entrance of Douglas Murray to the lineup. For awhile no one noticed how bad the Habs were playing due to the brilliance of their stars, as Carey Price, P.K. Subban, Andrei Markov, and Max Pacioretty kept the team afloat in November, but eventually everything broke down to the point where no one could salvage it.

Far be it from me to tell an NHL general manager how to do their job, but it's pretty obvious from the results so far this year that the job done over the summer didn't improve the team. The first steps to getting this team back to the competitor it was last year is to admit to some mistakes.

Boucher had a rough run towards the end in Tampa Bay, but he's a highly intelligent individual who knows the organization. He'll be inheriting a better roster than he ever had in Tampa, with better goaltending to boot. For the first time in who knows how long, the best available coaching candidate also meets the language requirements. This is really a no-brainer. Even if Boucher isn't as good as his first year in Tampa Bay, it's nearly impossible for him to not be an improvement on what Therrien has put forth this season, which is the single biggest possession implosion from one year to the next since these metrics began to be counted, with the Habs' Corsi percentage while the score is tied dropping from 55.2%, 2nd in the entire NHL in 2013, to 46.6%, 26th in the league this year.

It doesn't matter how you do it, he's not an NHL player. If you can't get anything in a trade, sending him to the AHL still saves $900K against the salary cap, and keeps him off the roster. While Murray is on the ice the Canadiens have been outscored 23-4. He is the single biggest drain on the team's performance from a roster perspective.

Run with the kids

Michael Bournival, Nathan Beaulieu, and Louis Leblanc are NHL regulars. More than that, they're positive contributors. If Rene Bourque has no trade value, play him in a role fitting of his production until he shows you more. Same goes for Daniel Briere, and Francis Bouillon.

Competing for as long as possible

When you were first hired, you stated your goal of building methodically in order to create the longest possible cup window. As it turned out, the team was a lot closer to competing than you thought. This year is the last time you'll ever have P.K. Subban and Lars Eller on cheap deals, and you've only got one more year after this one before Alex Galchenyuk and Brendan Gallagher need new contracts. Andrei Markov, Brian Gionta, and Tomas Plekanec are in their last productive years, with replacements in the system still 2-3 years away.

You have a choice here, and that's to make good on your promise and take as many shots at the cup as possible, or "wait two years" for another opportunity that may never come.

A special thanks to Benjamin Wendorf for the data.