Comparing last season's Habs to this season's through 48 games

The Montreal Canadiens aren't nearly the team that they were last year. Some haven't noticed this, so in this piece, we'll be delving into how much the results have changed, before going into why later in the week.

Share All sharing options for: Comparing last season's Habs to this season's through 48 games

How dire is the situation for the Montreal Canadiens? Casual fans and Therrien supporters point to the Habs being in 4th place in the Eastern Conference, and tied for 10th in the NHL as positive signs, but we know from years past that "you are what your record says you are" is a steaming pile of nonsense. Ebbs and flows of luck happen throughout the season, and Price's consistent excellent play has kept the Canadiens afloat while the rest of the team has faltered.

A large spike in shooting percentage and utter dominance from Price in November hid the fact that the Montreal Canadiens are not the team that they were last year. How big is the change? I dug up some statistics on Extra Skater to find out, and the gap in play is astonishingly large.

To show how bad the situation has become, I graphed the game by game cumulative total Corsi for the Habs in 2012-13 versus 2013-14. I ran the numbers for shots and Fenwick as well, but they all told the same story, so I went with Corsi because it gives us the largest sample size to draw from. I also addressed situational performance, breaking down what happened while the game is tied, while the game is close (within 1 goal in the first two periods, tied in the third period), all even strength play, and all situations together, to account for the Canadiens' strong special teams.

Last season Montreal got off to a bit of a stutter step, then took off as Subban hit his stride around game 20 when Michel Therrien started using him as a top-4 option. They continued to outshoot teams all season while the score was tied, giving themselves a better chance to get the lead first and take control of the game. This season the Habs have made zero progress, moving up and down until the 30 game mark, where they've stayed consistently below average.

Once again there's a wide divide, but this time it's even worse. Instead of just being consistently mediocre like they are in score tied situations, they've been unable to dominate when leading or trailing by a goal. What about the rest of even strength play though?

In this graph you can see the hit the Habs took after Alexei Emelin was injured last season was not reflected in their even strength play. In fact, it was the 5 games before that where they struggled a bit, rebounding afterwards to finish the season strong, in spite of bleeding goals against. Adding in the rest of even strength play for 2014 evens out some of the upward bumps displayed in the isolated situations, showing a clear, nearly straight line of collapse since game 9 of the season, even earlier than we had initially thought. Surely though, the Canadiens' special teams will save them? Maybe that's why they're in fourth place?

Nope. At even strength the Canadiens have been outshot by 288 shot attempts, in total they've been outshot by 266. Those amazing special teams that Habs fans think are so important, account for a measly 22 shot advantage, even while the penalty kill has been lights out. This is why we always stress the extreme importance of even strength play. It's where most of the game is played, and where most games are decided. The days of a team streaking into the playoffs and making noise on the back of a great powerplay are essentially over, you need to be able to outscore and outplay your opponents at even strength.

Montreal is bad and getting worse

What is wrong with the Canadiens? We're continually trying to find out.

Montreal is bad and getting worse

So what's the problem? Why could the Habs accomplish these lofty goals last season, but not this season? Is this a problem with the players?

In order to see what's happening, we've got to take a look at what's happening with individual players and how their possession games have been impacted from last year to this one. For the purposes of making this easy, we're going to label columns as 13 for last year, 14 for this year. We'll do this in two parts, the holdovers and the replacements vs the jettisoned. We're also going to ignore anyone who's played fewer than 20 minutes of ice time.

We're also going to only do one situation because all of them bear the same trend, and we're going to go with close situations because it combines a bigger sample size with a strong correlation with future performance. We'll start with the players who moved in the summer, to see how Bergevin's awful summer moves impacted the team:

The impact is staggeringly bad, with the only positive being rookie Michael Bournival, who's been playing significantly easier minutes than Jeff Halpern was. Obviously at this point Bournival is superior to Halpern, but every other player is a significant downgrade.

While Daniel Briere is a far worse possession player than Cole/Ryder were, the impact on the score has been minimal. Briere is also being used poorly, taking tough zone starts instead of easy ones, so I would categorize him as by far the least of the Canadiens' problems from this new group. But looking at the statistics in just this way, it's not entirely clear how much of an impact these new players have, so let's add up the totals goals for and goals against year to year and see how big the problem really is. This time, we'll be using all even strength play.

Who would have thought that just a couple of minor moves could create such a disaster? Keeping in mind that Daniel Briere and Michael Ryder put up almost identical even strength goal numbers (15 for, 15 against for Briere, 14 against for Ryder), and that Bournival is roughly equal to Jeff Halpern and Gabriel Dumont, the impact of George Parros and Douglas Murray replacing Colby Armstrong, Tomas Kaberle, and Yannick Weber is a -22 differential. That differential, if reversed, would bring the Canadiens from their current ranking of 24th in the NHL in even strength goals for percentage, to 16th, just above Ottawa.

Obviously going from awful to mediocre isn't the greatest thing in the world, so it's high time we check on the rest of the lineup. 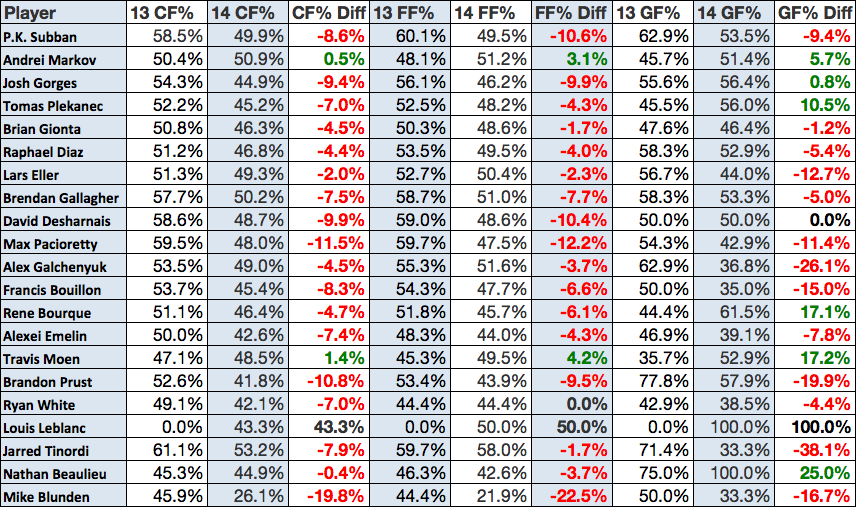 That's a lot of red, and very little green. The only players that can be said to have legitimately improved over last season are Andrei Markov and Travis Moen. There are other players who have improved goal stats due to sky high PDO, such as Tomas Plekanec and Rene Bourque, but their play itself become dramatically worse, and the scoring numbers will soon follow, as they always do.

The team's two best possession drivers in P.K. Subban and Max Pacioretty are both experiencing double digit drops in performance, as are Brandon Prust and David Desharnais, with Josh Gorges right behind them.

When you see this kind of impact, where only 2 of 25 roster players aren't significantly worse than the previous year, the signs point to the coaching staff. But what exactly has gone on there? That's what we'll be looking at next.