An exclusive interview with Michael McCarron

In the midst of his first OHL season with the London Knights, EOTP caught up with the Canadiens first round draft pick for a quick interview and scouting report.

Share All sharing options for: An exclusive interview with Michael McCarron

When the Montreal Canadiens made him the 25th overall pick in the 2014 NHL Entry Draft, outcry began immediately from both sides of the debate. Critics asserted that McCarron was drafted only for his size, and that his other tools would never be NHL calibre. Their opponents argued that the towering winger simply needed time for his skillset to grow into his impressive frame.

Regardless of your point of view, it's clear that McCarron will need time and support to develop, something the Montreal Canadiens seem to be quite good at providing. With the goal of furthering his career in mind, the US National Development Team graduate took his game to London. The Knights are among the best of the CHL this year, with a number of already drafted players skating under the tutelage of former NHLer and NHL coach Dale Hunter.

Prior to a highly-touted matchup with the Guelph Storm on January 10, EOTP caught up with McCarron for a few questions about his development, consistency, and how he evaluates his game.

There was good and bad to take away from his game against Guelph that night.

First, it's worth noting that McCarron currently doesn't fit into London's top six, which is well stocked with high quality forwards. Guelph dominated the first period, taking a 24-9 shot advantage into the first intermission, which seemed to limit McCarron's ice time somewhat. #24 doesn't play on special teams, and when London went down 3-1 with Guelph buzzing, McCarron's ice time seemed to be cut. London did manage to claw back into the game, however, and McCarron played a little more as London's momentum grew.

The big American brought some of his ice time troubles on himself with poor decision making. For example, during a first period stretch when the puck was being cycled in the London defensive zone on the side opposite McCarron, the puck rounded the boards and hit the winger's tape. McCarron, despite having a second or two to process the situation should he have chosen to take them, spun the puck quickly toward the blue line. At first, it appeared destined for icing, but instead was intercepted by the Storm point man. The play resulted in a Guelph shot, which could have been avoided had McCarron slowed things down.

McCarron was made to look like a rookie again in the second period. Embracing his role as something of tough guy for the Knights, he got into a war of words with Guelph captain and Toronto Maple Leafs 2nd rounder Matt Finn following a stoppage in front of the Guelph net. As the linesman reached the scene, McCarron reached for Finn and tried to grab him, even as Finn kept talking. The result of the play was McCarron, being held by the linesman, was goaded into a needless minor penalty for failing to let the spat end. The veteran Finn, meanwhile, laughed and condescendingly patted the 18-year-old on the head with his gloved hand. 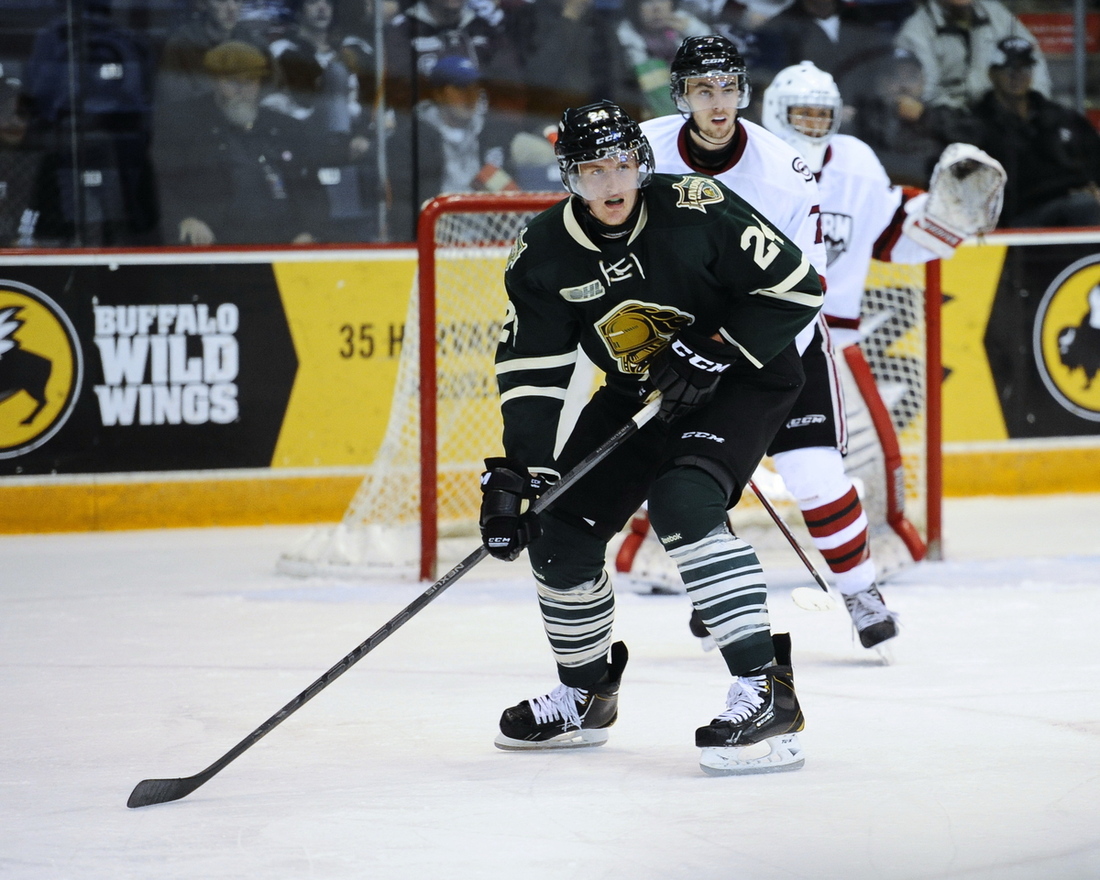 There were positives to report as well. McCarron drives the net with enthusiasm, and is always skating hard to get to where the play is headed. On another of his first shifts, McCarron headed into a 2-on-2 puck battle behind the Storm net. McCarron engaged both Guelph defenceman, and with the help of his fellow forechecker, came away with the puck and calmly fed it back to the blue line.

McCarron demonstrated some great awareness during a second period shift. With the puck cycling again in the London zone, McCarron observed that the defenceman covering the Storm player in front of Knights goalie Anthony Stolarz had drifted too far to cover a potential net-front pass. McCarron pinched down at exactly the right moment, sliding in to block a pass that would have otherwise resulted in a point blank scoring chance.

Finally, in a show of physical dominance (that should have been penalized, but I digress), McCarron, while skating up the ice alongside a Storm defender and jockeying for position, effortlessly knocked his opponent to the ice. His strength is apparent, even if he's still learning how to use it.

On the whole, I came away from watching McCarron live for the first time with the same impression that I entered with - raw, but toolsy. He's big, strong, and smart. After his first few strides, he's a good skater. His puck skills still need work, especially when put on display beside a guy like Max Domi, but McCarron appears capable of bigger and better things.

His ceiling is likely not as high as his role model, Milan Lucic, but I believe that McCarron can be a NHL player. His teammates agree that he's on the rise, as a recent London Free Press article attests. He shows flashes of excellence, and if he can achieve the consistency he desires, he can be impactful in the CHL and beyond. Take, for example, a recent four point effort:

Michael McCarron has a long path to becoming a NHL player, though it's my assertion that he's heading in the right direction. It's well established that character, and intangibles, and so many other similar traits that are looked for in hockey players that cannot be measured must be less valuable than those that can. In McCarron's case, however, I think that some discussion of character is pertinent - he has it in spades.

He came off as friendly and professional throughout our conversation, and seemed more engaged in the game than almost any other player, even in limited ice time. McCarron was frequently standing at the bench, and stepped onto the ice to take laps during stoppages whenever possible. During TV timeouts, McCarron could be found occasionally at the London net, talking shop with Stolarz.

Character isn't going to score him goals in the NHL, nor does it make him a better OHL player right now. That said, when coupled with what appears to be an awareness of the holes in his game, an enthusiastic approach to personal growth, and one of the best CHL-NHL support systems possible with help from London and Montreal, McCarron is giving himself the best possible opportunity to translate his physical tools into a NHL career.

2014 may be the most important year of McCarron's development. Gone will be the excuses of being a younger player and of adjusting to the OHL game. 2014 is the year that McCarron will look to grow into a top six role with the Knights, to make an impact in the Memorial Cup, and to fight his way toward World Junior roster contention for his native USA.

By this time next year, we should have a much better idea of where Mike McCarron's career is headed.

Some additional McCarron footage, for your viewing pleasure, is below. Tonight's selection includes a scrap with the Storm's Ryan Horvat (who's much smaller, for the record) and two more goals from earlier this year.