Facing a visiting team that ranks among the NHL's best, what do the Habs need to do to keep pace?

Share All sharing options for: Canadiens vs. Blackhawks - Game Preview

The Montreal Canadiens are set to face their greatest challenge of the 2013-14 season.

Yes, the Habs have already gone toe-to-toe with the San Jose Sharks in the middle of their dominant season-opening swing. Yes, the Habs have already faced the Los Angeles Kings, the posterboys for consistency and strength in the NHL over the last few years. Yes, the Canadiens have already taken on the the St. Louis Blues, a team so powerful that they've climbed into a second place tie in the ultra-competitive Western conference. Even with a quartet of a difficult matchups behind them, not to mention games against other high quality teams like the Bruins and Ducks, I believe that tonight will be as tough as it gets for the Habs this season.

The results of the games listed above have all been the same. The Habs met the Sharks when they were the league's best team to start the year, and held tough despite ultimately losing. The Blues outmuscled the Habs in the middle of a Montreal early season slump, and then ran them over a month later despite being without their captain and one of their top six wingers. Finally, let us not speak of the Kings game, in which poor play and poor officiating spiralled into an embarrassing outing.

These games all share a common thread with this evening's affair - the opponent was an impressive Western team, and the Habs were in tough before the puck even dropped. Given the Habs current circumstances, however, I propose that tonight's game exceeds the challenge presented by any game that came before it.

When the Habs played the Sharks, the Canadiens were playing good hockey as well. Against the Kings and Blues, the Canadiens were still riding the superlative play of Carey Price, even if it didn't become much of a factor in those particular games. Tonight, the Canadiens face a brutal opponent, and they do so while in the midst of a free fall.

Frequent commenter/poster MathMan calls it a crisis. He's not far off, and he doesn't sound surprised, either. Extra Skater shows how the Canadiens have lost the benefit of the percentages recently, something that many Habs fans have known for some time is now coming to fruition: the Canadiens' poor brand of hockey is finally affecting their record. Recall that 100 is considered a baseline, while a talented team may trend a little higher than that (usually no more than 101-102 for any long period). 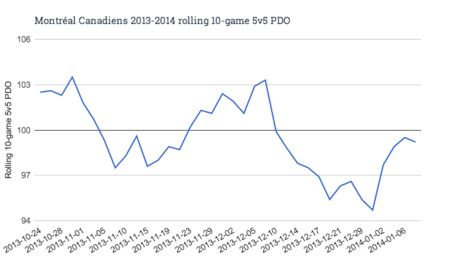 Compounding this problem is the absence of Alex Galchenyuk. The Habs haven't had to worry about any significant injuries for most of their year, but with Chuckie out with a broken hand, their second scoring takes a significant hit. The Canadiens absolutely depend on his even strength offence, as he's one of a very limited number of Montreal players this season who has proven that he can score at 5v5.

Establishing the Canadiens' struggles brings us to the second half of our equation: the fearsome spectre that is the Chicago Blackhawks.

The Blackhawks top players are NHL royalty, as names like Jonathan Toews, Patrick Kane, and Marian Hossa are at the very top of the list of NHL's best forwards. Scorer Patrick Sharp, who completes a formidable first line with Toews and Hossa, can now add Canadian Olympian to his resume, and is one of ten Chicago players who will travel to Sochi next month. On the back end, Duncan Keith is one of the only defencemen in the NHL who belongs in the conversation with P.K. Subban when discussing the NHL's best.

Perhaps most impressive is their depth throughout the lineup. On defence, 2/3 of their regulars are going to the Olympics, while a fifth player, Brent Seabrook, played at the 2010 games. Up front, the Blackhawks' second line can features Kane, assuredly one of the most electric players in the world today. He plays opposite the speedy sophomore Brandon Saad, creating a second dangerous trio that excels in exploitative minutes. Their third line fits the oft-mimicked, rarely achieved archetype of the bottom six group that can hold their own against anyone. Take a look at this player usage chart: 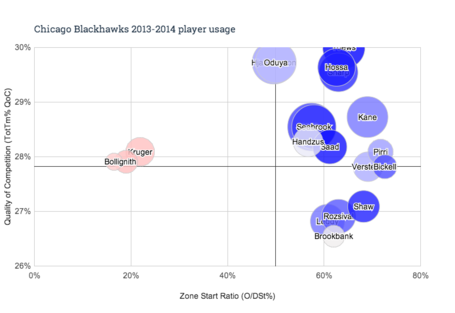 Brandon Bollig, Marcus Kruger, and Ben Smith are given almost nothing to work with in terms of their deployment and assignments, but manage to nearly break even on possession anyway. In contrast, only an exclusive group of Canadiens regulars have been able accomplish this, regardless of the type of work they've been tasked with.

So, what can the Canadiens do to win tonight?

The first, and most important factor, will be the play of Carey Price. Price has been one of the Habs most important players all year, and if he fails to outplay Corey Crawford this evening, Montreal will almost certainly be sunk. Luckily, Price has been at his best against Chicago, allowing only five total goals in three career games against the Hawks. Crawford has been similarly strong against the Canadiens, giving up three goals in two starts against Montreal.

Secondly, the Canadiens will have to rely on their powerplay to generate offence tonight. Montreal is the league's second worst team in terms of even strength scoring, but their powerplay ranks in the league's top ten. It's been cold of late, but players like Subban and Max Pacioretty are capable of scoring at any time. Against Chicago's pitiful penalty kill, the man advantage may be Montreal's best chance to stay competitive this evening and gain some momentum going forward.

Ultimately, Montreal will probably struggle to matchup tonight. They miss Galchenyuk's dynamic skill, and lack the resources on their current roster to adequately fill the hole his absence leaves. They need Subban and Markov to play twenty minutes against the Hawks top line, but will also need them to play the lion's share of any powerplays in order to keep the offence coming. Exhaustingly, even in a situation where P.K. and his probably-not-Markov partner can remain keep pace with Chicago's top line, a lesser Canadiens pair will still have to find way shutdown Kane and Saad.

There seems to be two ways that tonight's game can go. The first is that the Canadiens step up and show they belong, exploiting their advantages in net to keep the game close, and to get enough opportunistic offence to strike when necessary. The second is that the Canadiens, despite their best efforts, find this game to be a vivid illustration of the shortcomings of their personnel and approach. Unfortunately for Montreal fans, one of those outcomes seems much more probable than the other.