Mikko Koivu is working hard to return in time to represent Finland at the 2014 Winter Olympics in Sochi. Who replaces him on the roster and as Captain if he can't beat the clock?

As the NHL prepares to close shop after this Saturday night's games come to a close, Mikko Koivu is fighting the clock.

Koivu's hopes of representing Finland at the 2014 Winter Olympics have been threatened by a broken ankle suffered during a game against the Washington Capitals on January 4. While Mikko was able to finish that game, he required surgery soon after with the prognosis that he would miss a month of playing time.

It's been a month and Koivu has yet to play. After rejoining his teammates, he was returned home by Minnesota Wild GM Chuck Fletcher, who discussed Koivu's progress:

He wasn't ready to skate with the team, so we sent him home.

I don't want him playing if he's still injured. It was a pretty aggressive timeline. It's six-to-eight weeks usually with this injury and the hope is surgery speeds that up.

But it hasn't even been four weeks since surgery. He's doing the best he can in terms of rehab, but if he's not ready, it'll be hard for him to play.

Further complicating the situation is the chance that Mikko Koivu might head to Sochi to participate without suiting up for game action with the Wild. Steven Stamkos is facing the same issue for Canada, but aims to play this Saturday for the Tampa Bay Lightning.

That Koivu might fly out to represent his country before getting a game in with Minnesota actually has some pundits questioning his loyalty to his NHL team. Outrageous, really.

Wild's Mike Yeo on if Mikko Koivu can't play in Sochi: "It's going to be difficult for him if he can't make it because of what he's put in."

More: "He wants to represent his country but he also wants to look out for best interest of our team. There's a lot on his mind right now."

Who would be Mikko Koivu's replacement?

Finland will be forced to name an injury replacement if Mikko Koivu is unable to play in Sochi. There are a handful of Finns in the NHL that could get the call to participate in the 2014 Winter Olympics. 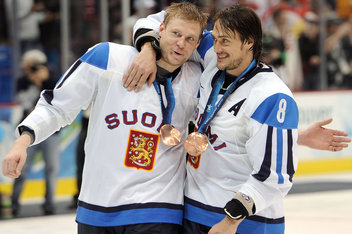 A look at Finland's strengths, weaknesses, and X-factor heading into the 2014 Winter Olympics in Sochi.

The most likely candidate is Florida Panthers forward Sean Bergenheim. The 29-year-old has eight NHL seasons to his credit with the Islanders, Lightning, and Panthers. It's a bit surprising that he didn't make the team right away as Finland chose to select a number of players from the KHL and SM-liiga instead.

With 84 goals and 151 points through 429 NHL games, Bergenheim can make up some of the lost offense if Mikko Koivu can't go. Furthermore, Bergenheim has shown an ability to elevate his game in the NHL playoffs with 17 points (including 12 goals) through 23 games with the Lightning and Panthers.

Other Finnish players that could get the call are Ville Leino, Buffalo Sabres; Jesse Joensuu, Edmonton Oilers; and rookie Erik Haula, Minnesota Wild.

Don't be surprised if Finland selects another European-based skater to replace Koivu, though. Opting for a player with experience on the larger international ice surface is a strategy they've already employed with their roster selection.

Mikko Koivu was to inherit Finland's captaincy from older brother Saku Koivu for the 2014 Winter Olympics. So if he can't represent in Sochi, the role will fall to yet another.

While 43-year-old Teemu Selanne would be a fun choice, my money is on Olli Jokinen. Jokinen, 35, is making his fourth trip to the Winter Olympics, and spoke highly of Finland's underdog status and work ethic:

We don't mind being underdogs, that's fine. We have good goaltending, we have everybody buying into the system. Everybody is proud to put that jersey on and we stick with our game plan. I think it doesn't really matter who plays for Finland, the names on the back don't really matter, because everybody who goes there buys in and sticks with the plan. And good goaltending gives us confidence that we can win those big games.