All you need to know about the games for Wednesday February 19th. 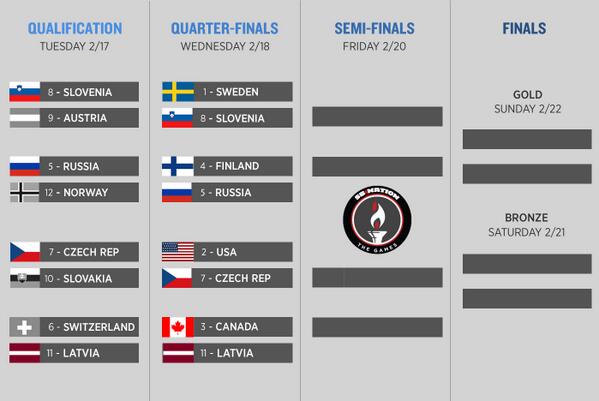 The Olympic quarterfinals kick off at 3:00 AM ET with top-seeded Sweden taking on 8th-seeded Slovenia. Sweden is nursing a large amount of injuries including captain Henrik Zetterberg who was injured early in the tournament. That hasn't stopped the Swedes from going undefeated in the preliminary rounds of the tournament and will likely not hamper them badly against a massive underdog in Slovenia. Though the Slovenian side is not to be taken lightly after upset wins over Slovakia and Austria in recent games. TSN and NBCSN will have the TV broadcast and CBC and NBC will have live webcasts.

Perhaps the most intriguing match up of the day pits the host Russia vs an injury ravaged but resilient Finland squad at 7:30 AM ET. Russia shut out Norway and Slovakia in back-to-back games to punch their ticket into the quarterfinals of these games and face a stern test in this Finnish squad. Despite injuries depleting their depth the Finns have remained highly competitive all tournament and have only dropped 1 game in overtime to the powerhouse Canadian team. CBC and NBCSN will have the live broadcast on TV as well as online with their webcast.

Looking for a free stream for Canada's game against Latvia? We've got you covered.

The first of the 12:00 PM ET start times sees massive underdogs Latvia take on medal favorites Canada. Latvia hadn't made much noise all tournament before shocking the defensive powerhouse Switzerland on Tuesday. Outside of a loosely contested OT win against Finland Canada hasn't been challenged much at all in this tournament. Carey Price will get the start while P.K. Subban will once again be a healthy scratch. CBC and MSNBC will have the TV broadcast while CBC will have their usual webcast.

The second 12:00 PM ET game pits the Americans against the Czechs, in what should be highly competitive affair. Despite Ondrej Pavelec's best efforts, the Czechs held on to defeat Slovakia 5-3 with Tomas Plekanec notching a goal and an assist in the game. The Americans will look to the Olympics leading scorer Phil Kessel to continue his play as a semi final match up with Canada looms should both sides win. TSN2 and USA network will have the live broadcast for the final quarterfinal matchup.

No games scheduled for Wednesday