All you need to know about the upcoming games on Tuesday February 18th. 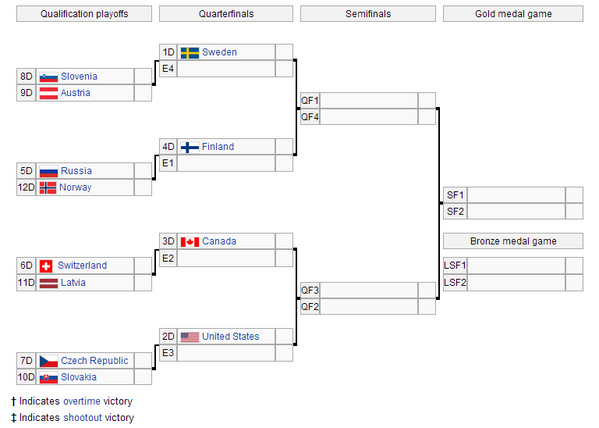 Kicking off Tuesdays elimination round action at 3:00 am will be Slovenia and Austria. Austria is coming off a 3-1 victory on Sunday over Norway while Slovenia suffered a 5-1 loss at the hands of the Americans. Slovenia may also be without their only NHL star in Anze Kopitar after he was injured over the weekend. The winner of this game goes on to face the top seeded Swedes in the quarterfinals. CBC and NBCSN will have the broadcast for Canada and the US as well as streaming online.

The second elimination game kicks off at 7:30 am as the host Russian side looks to overcome two sluggish and underwhelming performances vs Norway. Russia struggled badly over the weekend first losing in a shootout to the Americans and having to go to a shootout against Slovakia and their 3rd string goaltender. The Russian can't afford another poor start heading into the medal rounds with big guns Finland and Sweden on their half of the bracket. CBC and NBCSN have the games once again.

The first of the 12:00 pm games pits the defensively staunch Switzerland against Latvia to see who advances to face Canada in the quarterfinals. Switzerland comes in as the best overall defensive squad in terms of goals given up as they have only conceded 1 goal in a game against Sweden however they also have had difficulty scoring as they have 2 goals to their credit all tournament. Latvia has yet to win a game in the Olympics so far but reminded highly competitive against Sweden and Czech Republic and only dropped a 1-0 decision to the Swiss in their first meeting. CBC and MSNBC will have the game broadcast.

In the final mens match up of the day the Slovaks will face off against the Czech at 12:00 pm with the winner going on to face the second seed United States in the quarterfinal. Slovakia suffered back to back defeats this weekend, first being upset by an unheralded Slovenia and then in the shootout against a superstar laden Russian team. The Czech Republic is coming off a 1-0 shut out loss to Switzerland on Saturday and will look to punch their ticket into the quarterfinals. Both sides have plenty of NHL talent but strange coaching and poor goaltending have hampered their efforts in the tournament thus far. CBC and NBCSN will have the broadcast and webcast for the noon time game.

In the battle for 7th place Germany will meet Japan after both sides lost in the semifinals to make it into the 5th place game. Germany dropped a close 2-1 game to Finland while Japan struggled in their rematch against Russia eventually losing 6-3. CBC will have the webcast of the game.

The fifth place match has Finland meeting Russia, despite topping their group Russia was unable to make it to the medal round after losing to Switzerland in the quarterfinals. The Finns dropped their quarterfinal game 4-2 to their biggest rival in Sweden and were dropped into the consolation round. CBC will have the game webcasted live from Shayba Arena.