The ten most impactful Habs trades of the 90's: 'Le Trade'

Sorry folks, but when I started this series I knew I'd eventually have to do this to you. I don't think anyone will argue the fact that this was the worst trade of the 90's, and maybe even the history of the Montreal Canadiens. Not all history can be good.

Share All sharing options for: The ten most impactful Habs trades of the 90's: 'Le Trade'

Patrick Roy is, in my mind, the greatest goaltender ever to play the position. A career with four Stanley Cups, three Vezina trophies, three Conn Smythe trophies, and a jersey number retired by two teams speaks for itself. Few will forget how he took the league by storm in 1986, leading the Canadiens to the Stanley Cup and becoming the youngest Conn Smythe winner ever at 20 years of age. He is truly a legend of the sport.

I'll skip the part where I detail the careers of the players involved in the trade. I'll skip right to the second day of December, 1995. On that day, Patrick Roy started in nets for the Habs against the Red Wings in a horribly one sided tilt at the Forum. Roy was having a bad night, as evidenced by the five goals he allowed in the opening frame. Now, goaltender in the NHL is probably the hardest position to play, and these things happen to the best of them from time to time. Usually what happens is the coach sends out the backup for the second period. Nope. Coach Mario Tremblay left Roy in the game and he went on to allow another four goals amid jeers from the faithful at the Forum. When he finally did get pulled, Roy went straight over to team President Ronald Corey who was sitting behind the bench, and famously told him this would be his last game in Montreal.

I'm among those who put the blame squarely on the shoulders of Tremblay for that boneheaded move. You just don't do that to a goaltender, and I feel that Roy had every right to be upset after the game. Roy told the media that Tremblay left him in to humiliate him and that he wouldn't be leaving Montreal if he had just been pulled after one period. My father maintains to this day that Ronald Corey had something to do with the situation, and almost seems to be more willing to blame him than he is to blame Tremblay. But like I said, I'm inclined to blame the coach who's job it is to make those in-game decisions. Roy could have handled himself better afterwards, but again, I feel his anger was justified and I can't blame him for lashing out.

Tremblay and Roy reportedly had a relationship akin to the Israelis and Palestinians. Prior to his coaching the Habs, Tremblay hosted a call-in radio show on CKAC. One of his favourite topics was how Roy was coddled and put on a pedestal above other players on the team. He made it rather obvious, that if he were in charge, Roy would be handled quite differently. I've read that Roy used to listen to the show with festering anger as Tremblay repeatedly ripped him.

When Tremblay and Roy played together, they used to argue quite a bit, so it seems they never really liked each other. Apparently they once almost fought at a coffee shop in Long Island and then almost fought again when Tremblay fired a shot at Roy's throat in practice. They really did not like each-other and it appeared that Tremblay would hold true to his words from radio days and would not be coddling the star player whatsoever. This is what makes me believe that he did intentionally humiliate Roy. 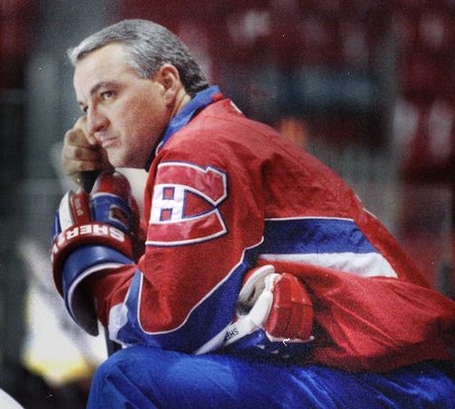 Tremblay as Habs coach via cs-montrealgazette.s3.amazonaws.com

Regardless of blame, the damage was done. General Manager Rejean Houle was now faced with the task of trading the team's best player. I've tried to ascertain exactly how much shopping around was done by Houle, and correct me if I'm wrong but it appears there was not much. (Editor's note: It has been speculated that Serge Savard had tried to trade Roy before and backed out at the last minute, and apparently that's when most of the shopping around occurred) Four days after the incident, he shipped Roy, and Canadiens Captain Mike Keane to Colorado for Martin Rucinsky, Andrei Kovalenko and Jocelyn Thibault. Clearly, this was a steal for Colorado...

Now, Martin Rucinsky was a pretty good player throughout his years with the Canadiens, but Kovalenko played just one season with the club and Thibault was not even close to being in the same league as Roy in goal. So, the return on this deal sucked and when you consider that the Habs lost their captain AND the best goaltender in the league, this very well could be the worst deal in the history of hockey. 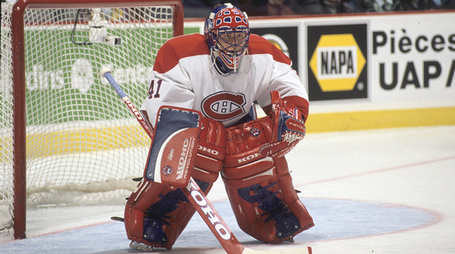 The tendy that came the other way in the deal: Jocelyn Thibault via ourhistory.canadiens.com

If the deal had been something like Roy for Joe Sakic straight-up, I'd probably be able to swallow that. But this was just an absolute hosing. I really don't know how mad I can be at Rejean Houle for this one, because he was definitely under the gun, but come on. Even with the circumstances surrounding the trade, I have no idea how Roy's career to that point wasn't enough to get a much, much better deal. Sam Pollock would have made it work.

I was five years old when this trade happened, and while I've been a Habs fan since birth, I obviously did not have a firm grasp on what was going on. Now, I'm an adult who is aware of what happened and I believe that this was an institutional failure of epic proportions. I blame Mario Tremblay for being an asshole. I blame Rejean Houle and Ronald Corey for not stepping in, and for not firing Tremblay or at least attempting to mend fences with the best goaltender ever and a rookie Head Coach. And even if Roy refused to stick around after Tremblay was fired, nothing will convince me that Houle did enough to get the best deal possible, even under the circumstances.

Again, I was a five year old when this all went down. In the comment section, I'd love for anyone who was old enough to have really experienced it at the time to give their opinions on what went down. Like I said, my Father has a boiling hate for Ronald Corey and believes that he had a hand in Roy's treatment. I doubt that everyone will agree on who specifically should be blamed in this situation, but I'm sure that all Habs fans will join me in lamenting this trade as the worst of the 90's, and possibly the worst ever.