The ten most impactful Habs trades of the 90's: Corson for Damphousse

While the 90's were a particularly bad decade for the Habs in terms of trades, not every trade was a complete failure. In the 1992 off-season, the Habs acquired eventual captain Vincent Damphousse from the Edmonton Oilers.

Share All sharing options for: The ten most impactful Habs trades of the 90's: Corson for Damphousse

So, the last article in this series was not so upbeat. But, unlike the Chelios for Savard trade, this one worked out quite nicely, and immediately for the Canadiens. In the 1992 off-season, the Habs shipped the ever-dependable Shayne Corson to Edmonton and received Vincent Damphousse in return. The Quebec native would go on to win a Stanley Cup with Montreal and captain the team.

Vincent Damphousse was originally drafted by the Leafs, sixth overall in the 1986 draft. He spent five seasons with them, and was quite successful in the stats department, but the leafs sent him to Edmonton anyways in 1991. Oilers GM Glen Sather once said of him that the only French-Canadian player with more skill was Mario Lemieux. Pretty high praise, and deservedly so. In his first season with the Oilers, he racked up 89 points and helped them to the Conference Finals before being swept by Chicago. In spite of a great season, and Glen Sather's praise of the French-Canadian forward, he would be shipped to Montreal after that year.

Shayne Corson was the big name coming the other way for the Oilers in the deal. Corson joined the Habs full-time in 1986 after playing only a few games in the 85-86 cup-winning season. He was an excellent player with the Canadiens, consistently good for 50-plus points in nearly all of his seven (original) seasons with the club. While Corson was productive, I'm not sure what the thinking was in Edmonton at the time. Damphousse had put up 94, 73, and 89 points in his last three seasons with the Leafs and Oilers, whereas Corson's best season to that point was a 75 point effort. I feel comfortable saying that at one-for-one this trade would be entirely unfair for Edmonton. 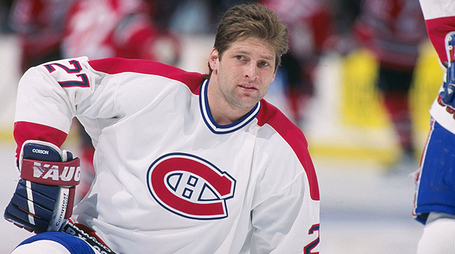 Shayne Corson with the Canadiens via ourhistory.canadiens.com

But contrary to what the title of this article may suggest, Corson and Damphousse were not the only players involved in the deal. The Canadiens also shipped Brent Gilchrist and Vladmir Vujtek to Edmonton, and received a fourth-round pick in 1993 along with Damphousse. The Habs used the pick to select Adam Wiesel, who never wound up playing for the team. Brent Gilchrist only played one season in Edmonton, and was not much of a difference maker, while Vladmir Vujtek spent most of his career overseas, and only appeared in 70 games over two seasons in Edmonton. So, while it was not a straight up trade at the time, in hindsight it kinda was. 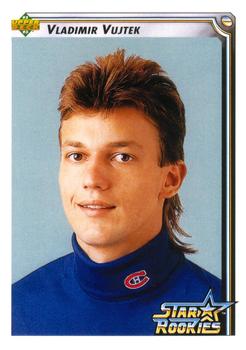 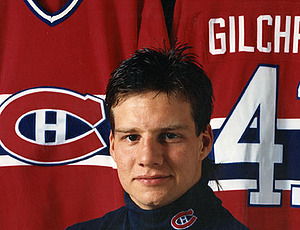 If you evaluate this trade on a one-for-one basis, which I'm inclined to do, it is a pretty clear win. The Habs managed to get a major difference maker whereas the Oilers got one dependable top-six player and two depth players. Now, if that sacrifice of depth hurt the team, I'd be pissed. But, Damphousse went on to put up 97 points his first season in Montreal, added 23 points in the playoffs and had a drink from Lord Stanley's mug. Clearly the loss of the other two players had no effect on the success of the Canadiens, rather it gave them the piece they needed to bring home a championship.

I'm not knocking Corson, but this was a heck of a deal for the Canadiens during a time period where almost every other trade went very badly. Even if you're a big Corson fan, he came back to the team in 1996 anyways, so he wasn't really gone that long. When I think about this trade I wonder if Oilers fans felt like they got a good deal at the time. They got three players in return for one player and a fourth-rounder, which I bet seemed like a sweet deal considering that Corson was a very good player. In hindsight, clearly the benefactors of this trade were us Habs fans.

In a decade where the once-dominant franchise was decimated by a number of terrible trades, this one is a diamond in the rough. After the lockout finished this year, and the Habs finally had their "raise the torch" season opener, I was like a little schoolgirl when Damphousse was passed the torch. He is the only Habs captain of my 23 year lifetime that I've loved nearly as much as Saku Koivu. And, in my opinion, this was probably the best trade made by the Habs in the 1990's.