Our runner up this year is the 19-year-old scoring phenom the Canadiens selected third overall in 2012. How far has he come in one year's time?

It was in January of 2012 that I first heard the name Alex Galchenyuk. I was scanning some preliminary draft rankings once it became obvious that the Canadiens would be selecting near the top of the 2012 draft, and searching the various names on youtube. It became clear pretty quickly to me that despite the hype surrounding talented Russian Mikael Grigorenko, Galchenyuk was the right pick. He had the hockey sense, the puck handling, the shot, skating, the vision, and the character that was needed to succeed. Really, the only question mark was the ACL he damaged at the start of the previous season, and it's a testament to his potential that despite playing only 12 games in his draft year, EOTP voted him the team's 3rd best U25 player last summer.

This season, Galchenyuk took advantage of the NHL lockout to improve his overall game in Sarnia before making the big club out of training camp in January, and never looking back. He scored nine goals and added 18 assists for 27 points in 48 games, averaging only just over 12 minutes of ice-time with coach Michel Therrien opting to bring his young talents along slowly with a deep forward group at his disposal. He added three points in five playoff games with just marginally more ice time, including this beauty of a wrist shot past Senators goalie Craig Anderson in Game 4 which, as far as we're concerned, concluded after the second period.

The majority of voters felt that Galchenyuk was the second-best U25 player in the Canadiens system. Those that didn't chose either Pacioretty or Eller ahead of him, likely because of their multiple full years of NHL success. Judging career certainty versus potential is always difficult, although it becomes somewhat easier when we're talking about NHL players. For those keeping count, this sets us up for a not-so-shocking unanimous number-one selection. It's not the only thing he's won recently, either. 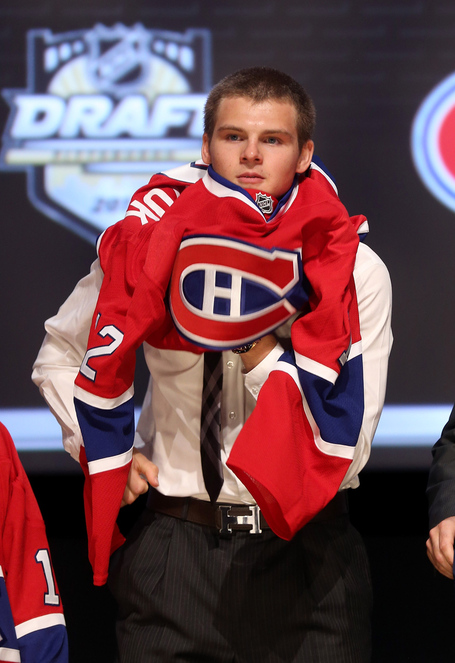 Where to begin. Galchenyuk has an exceptional wrist shot, as mentioned above, that rivals Pacioretty for the best on the team. He is a great stickhandler, as exhibited by a couple of nifty goals he scored this year. He is a good skater, although his speed won't necessarily stand out among his likewise-talented peers. His foremost strength might be his hockey sense, as he manages to be constantly involved on offense, finding the passing lanes and making the right play with the puck. He is also an incredibly hard worker. Prior to writing this, I looked back at all of the goals he scored this year and noticed how many of them were simply on goalmouth scrambles. He never seems to skate by the net as a passenger. He is constantly involved until the whistle blows, and his awareness allows him to find open space and anticipate where a rebound or shot might go.

Galchenyuk's hard work paid off in his rookie year, as he wound up 9th among forwards in points/60 mins, and that's just at even-strength. That's not among Canadiens. That's not among rookies. That's league-wide. Now, it's important to note that the one teammates affectionately call "Chucky" wasn't facing opponents' top lines. With Gallagher and Prust, he was able to put up great possession numbers since the trio would serve as an offense-heavy exploitation line. Once Prust was replaced with Eller and Galchenyuk was moved back to the wing, however, soft competition turned into secondary toughs, and going into the playoffs, the Wisconsin native was able to raise his game while some of his teammates faltered.

While Galchenyuk possesses a tantalizing package of skills, he's still raw in a couple of areas, the biggest being defensive coverage. In the playoffs alone - where no shortage of Canadiens players missed assignments on the defensive end - he was at least partially responsible for a couple of breakdowns. It is an area in which he, along with his youthful peers, will have to improve (and surely will) if he is to eventually transfer to centre, and at least take secondary tough minutes on a consistent basis. Ultimately, there isn't one area of weakness that should be too concerning, more just wrinkles in his game that will be flattened with experience and good coaching.

When Trevor Timmins announced the third-overall pick at the 2012 draft, he was pencilling in a future top-line centerman, and while you never wanna write out future line combos in ink, it's fair to say that it would be a shock if Galchenyuk didn't develop into just that. The upper limits of his potential are even more tantalizing. My long-term projection would be for a healthy Galchenyuk to put up 80 to 90 points a year in his scoring prime (24 to 26) and maybe even earlier, while flirting with 25 goals apiece. Send a couple of Stanley Cups the town's way and maybe there's a no. 27 in the rafters that doesn't belong to Alex Kovalev one day.

In the shorter term, I would expect Chuckie to play tougher minutes this year on the wing, meaning less offensive-zone starts and more second-line opponents. While he should be able to adapt and perform admirably, it could mean that his offensive production doesn't come right away. It's easy to foresee some writers pondering a "sophomore slump" if he enters December with just 15 points in 27 games, but I wouldn't be worried. This is a guy who was better than Tyler Seguin in his rookie year (that may not mean much now, but check back next summer). When the talent and work ethic are there, the results usually follow. Galchenyuk will be a stud for years to come.

As we reach the end of our countdown, we ask you whether you would take Max Pacioretty, Lars Eller, or any of the 21 other players already profiled ahead of Galchenyuk at this time? What are your projections for 2013-14?

If you like Alex Galchenyuk and want to learn more about him: