Breaking down the 2013-14 Montreal Canadiens' schedule

The schedule came out last week, now it's time to go through it in detail.

Share All sharing options for: Breaking down the 2013-14 Montreal Canadiens' schedule

We've already posted the 2013-14 schedule and talked about a few of the quirks in there, but let's break it down like we did last season and find out what's in store for our Habs. To do this we'll look at the strength of the schedule every month, using pro-rated points for an 82-game season for each team to create an average, and do the same thing with Fenwick close. We'll also look at the home/road split and the number of back-to-back games. Team strength changes from year to year, but not a whole lot, so this can give an idea of what the Habs are in for. 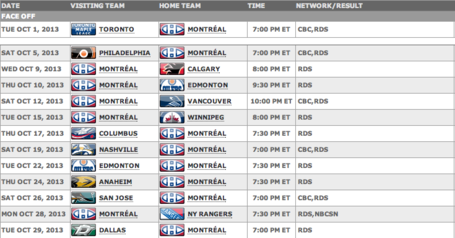 Sometimes to start the year you get a bit of a gift, and it seems the Canadiens were handed one by the NHL schedulers. This is a very weak schedule to for the first month, with eight non-playoff teams in 13 games, and most of the games played at home as well. The real challenges in October will be the Canucks, Sharks, and Rangers.

A busier and tougher month greets the Habs in November. Five sets of back-to-backs is extreme for any team in one month, but luckily while the Canadiens have some tough matchups in there, there are a lot of weaker teams to soften the competition a bit. The back-to-back against the Capitals and Penguins is the toughest one of the month.

What looks like an extremely easy month is masked by the underperformance of the Devils and Panthers last year. The Canadiens open the month with an extremely tough stretch of four games against some of the best possession teams in recent years. New Jersey is guaranteed to be much weaker without Ilya Kovalchuk in the lineup, but that may be mitigated a fair bit by the huge improvement of Cory Schneider over Martin Brodeur. Then again, maybe Brodeur will play. December also signals the first time the Habs meet their archrival Bruins in the upcoming season, so be sure to circle December 5th on your calendar.

January gets no easier for the Habs as the strength of their opponents goes up in both average points and average possession. The Habs have a bit of a break in that there's only one back-to-back set to worry about, but it's a tough one against the Red Wings and Capitals. This month also marks the Canadiens hosting the Stanley Cup champion Blackhawks, which is always an entertaining game.

The Olympics cut 17 days out February, but the Canadiens play seven times in the remaining 11 days, with six of those games being in back to back sets. The schedule starts out pretty easy in February, but ends with four straight strong teams, and a back-to-back against the Penguins and Red Wings looks to be one of those killers no team wants. Pittsburgh's two games against the Canadiens are both on the second half of back-to-backs, which sets up a nice situation for them. This will be the first time the Habs host the Wings as a division rival in the new alignment as well. 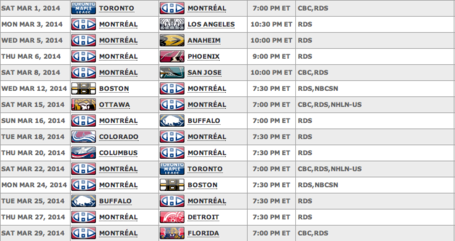 Once again this month falls on the side of the ledger. The average competition isn't super high, but the frequency of the schedule and the majority of it on the road makes it one to watch out for. Being late in the season, some players may begin to fade by this point as well.

The Habs don't get a break down the stretch, with five of their last six games not only coming against playoff teams from last season, but strong ones. Six games in 12 days is never a picnic anyway, but at this point in the season with this level of competition, it could be a rough end.

Looking at the schedule like this, it seems like if the Canadiens want to put themselves in a good position, they're going to have to take advantage early. October and November are easy months, or as easy as the NHL gets, and if the Habs don't have a great record by that point there's likely something wrong. It's going to be much tougher to get points towards the end of the year.