An examination of each selection made by the Canadiens at the 2013 NHL Draft in three parts.

Share All sharing options for: A Review of The Montreal Canadiens at the 2013 NHL Draft: Picks 25 & 34

With the conclusion of the 2013 NHL Draft, no doubt many of you are thinking "who are these guys?" and "when do they start playing for the Canadiens?" While the second question is a bit more difficult to answer, I will attempt to cover both questions in my annual review of the Montreal Canadiens work at the draft table.

For this year, I have called upon the resources of Future Considerations, McKeen's Hockey and HockeyProspect to evaluate each of the newest members of the Canadiens organization.

The Montreal Canadiens had 9 draft picks in the 2013 NHL Draft - here is where they were:

This section will review the 25th and 34th overall picks. 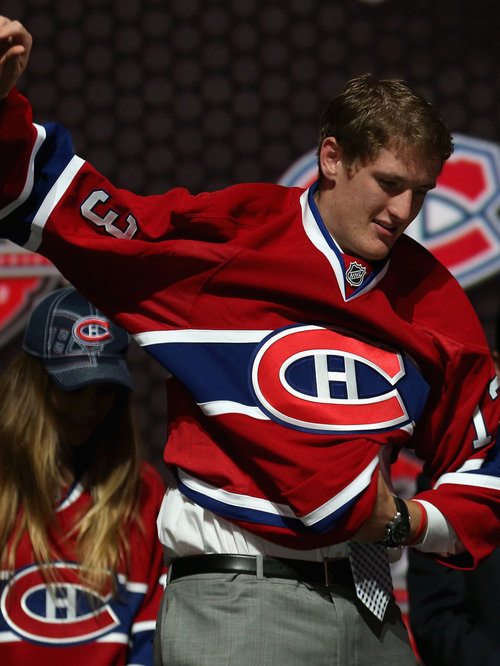 Team: US National Under-18 Team (USNTDP)

What the Scouts Say:

Michael McCarron is a bit of a divisive prospect in the view of the combined eyes of Future Considerations, McKeen's and HockeyProspect.

McCarron's skating abilities are not widely debated among the scouting reports available. The data holds him as an average skater, good for his size but has issues generating acceleration and could stand to improve his speed. Thoughts from McKeen's are that as he grows into his frame he will develop the leg strength to accomplish this. Future Considerations makes the notation increasing his acceleration could be a significant gain for his development.

Quote from McKeen's Hockey on his skating: "propelled by a wide, swooping stride .. skating has improved dramatically thanks to steady upgrades in strength and foot-speed .. should improve a slushy first step as his strength fills in"

McCarron's puck skills have some differing opinions between scouts though. Future Considerations speaks the best of his abilities, crediting him with a good ability to protect the puck in tight areas, possessing a strong shot and able to both recieve and distribute the puck while in motion. McKeens seconds these thoughts about McCarron's ability to dish the puck, but feel his ability to protect the puck and sense pressure when he has the puck are average. HockeyProspect supports the reports on McCarron being able to control the puck well, but observed a lack of creativity with the puck and taking it to areas to generate scoring chances.

Quote on his offensive abilities from Future Considerations: "He controls the puck, especially in tight spaces. He passes well and receives pucks well in motion. McCarron is cognizant enough to shoot in order to create rebounds, instead of trying to pick corners."

The physical aspect of McCarron's game has some debate to it. The consensus agreement is that McCarron's strength is apparent even as a young man still growing into his frame. McCarron delivers booming checks, can battle along the boards with just about anybody and is a difficult forechecker to play against. The debate rests around his consistency. McKeen's notes his edge in games can disappear, he will lack intensity and does not always work as hard as he should when playing without the puck. HockeyProspect takes this a step further, feeling he does not win puck battles often enough and is too passive about employing his physical game to make things happen in the offensive zone. Future Considerations cited McCarron as having some judgment issues in his physical game, he will take bad penalties and can waste time arguing with officials. Future Considerations credits McCarron with a defensive awareness to his game, he knows his defensive responsibilities and will commit to defending in his own end. Neither McKeen's nor HockeyProspect made a notable remark of his defensive game though.

Quote on McCarron's physical game from Future Considerations: "He sets the physical tone in games with big hits and by driving the net. He’s hard to handle for defenders, even those developed college-aged opponents.

I cannot say I was very impressed by this pick when it was announced. With Valentin Zykov and Morgan Klimchuk on the board, I envisioned a selection of a player that had a much higher offensive ceiling. While McCarron obviously brings a physical aspect to the game that most can't match, will he be bringing the puck skills to make himself a Top-6 player?

McCarron's scoring in lower levels of hockey doesn't inspire much confidence; one can hope he is a late developer in this area, but precedent for such players is not overly strong. This isn't to say it's impossible, and analysis suggests his upside is better than I originally expected, but his scoring numbers are underwhelming so far. There is the probability he will be able to mix his physical brand of hockey into the game to help him create offensive opportunities most can't, but the ability to finish on a chance will need to be there.

We should not discount Timmins is ahead of the curve though. He's spotted talent that most people completely ignored or underrated, to the great benefit of the Canadiens. Some of his best work has gone unappreciated before it was lost (see Ryan McDonagh, Mark Streit, Mikhail Grabovski) so for now, we will see what McCarron does. He has the choice of playing for Western Michigan University or the OHL London Knights for the coming season. My preference would be to the Knights due to the solid reputation of the Hunters in developing NHL-quality prospects.

Personal Projection: He will start auditioning for a NHL spot in 2016 at the earliest. 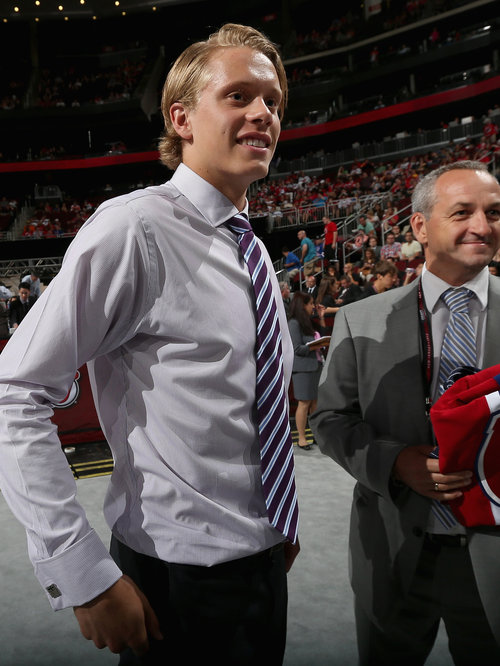 What the Scouts Say:

Jacob De La Rose is not a player who invites a lot of controversy among scouts, his skill set is well agreed-upon as are his strengths and weaknesses.

There isn't much disagreement about De La Rose's qualities in terms of skating. While he does not possess exceptional speed, he has a smooth skating stride with notable strength to it and can build to a good top speed. Future Considerations and McKeen's note he could stand to improve his agility. HockeyProspect speaks very well of his straight line skating. McKeen's was the most notable dissenter on his skating, noting awkward mechanics in his takeoff and crossovers.

Quote on his skating from Future Considerations: "He has a strong smooth stride that generates good power and balance as well as some decent top speed. Not the most agile, but he gets to where he needs to be, making quick cuts here and there and is hard to handle."

When it comes to De La Rose's puck skills, he has some complimentary notes from scouts, but not an abundance of them. Future Considerations rates his shot as having some power to it, while McKeen's notes he can get the puck off his stick quickly while coming off the cycle. Future Considerations credits him with a good ability to handle the puck, but does not flash a talent for deking out his opposition; they also feel his offensive vision is limited. HockeyProspect has observed some moments where he has beaten defenders in head-to-head matchups, but not on a consistent basis.

There is a pretty solid consensus on De La Rose's physical game and two-way ability. McKeen's credits him as a player who willingly engages in the physical side of the game; he will battle in the corners and along the boards for the puck, and protects it well once he has it. Future Considerations takes note of very good strength on his part, ability to throw powerful body checks and win the majority of the puck battles he engages in. Future Considerations ranks him as a very defensively responsible player and is good at tracking the open man to cut them out of the play. McKeen's has similar praise, crediting him as a sound defender on the penalty kill willing to block shots, disrupt passing lanes and take hits in order to make a defensive play. HockeyProspect likes his play across all 3 zones and notes he is at his best when he is engaging physically and will need to maintain that to be successful.

I'll be quite honest I felt a lot better about the selection of De La Rose than I did of McCarron, or Fucale. I still had Valentin Zykov on the board ahead of him, but De La Rose does bring his own skill set to the table.

De La Rose has already displayed an ability to match against professionals thanks to his season in the secondary Swedish professional league, the Allsvenskan, this past year. Given that he both managed to produce in a men's league as a 17-year-old while playing a responsible two-way game and delivering a physical impact, it speaks very well to his pro prospects.

The concern of course is De La Rose's scoring impact. There isn't a ton of praise for him as being either creative or having a particularly accurate shot; there is a compliment for power in it, but no scouting group will come out and say he's a decent finisher. Granted he has just turned 18 and was playing against men this past season, his career numbers in Swedish hockey do not show much of a scoring touch, especially compared to say Sebastian Collberg. If he puts in a ton of work, he could make his offensive tools useful enough to be a complementary winger, but I imagine he would need to benefit from a creative centre to really generate any solid offensive numbers.

De La Rose I think projects well for a Top-9 role, but he would really have to max out his tools to warrant as a full-time Top-6 skater.

Personal Projection: Starts auditioning for a roster spot in 2016.