I don't know if any of you guys noticed, but there was a game on Sunday where a lot of terrible stuff happened, mostly by Habs players.

Share All sharing options for: On dirty hits, Shanahan, and NHL discipline

I know a lot of people probably want to forget the last game the Montreal Canadiens "played", but since I was on vacation I wasn't really able to say my piece. With a day and a bit to stew on the situation, and seeing the results from the NHL, I have a few thoughts on the matter.

The night before I left for vacation I wrote about how the Eric Gryba hit on Lars Eller sat with me in the pit of my stomach. In a lot of ways the game on Sunday night was worse.

There was no single play that had the same impact, but it wasn't for lack of trying.

Reading the recaps from Matt and Laura, and the comments therein, it's really obvious that most Habs fans felt a similar way about what went down. It was downright embarrassing.

The score didn't bother me. Honestly the hockey part of the game was closer than people were pretending. The Habs have lost games and lost them badly every year I've been a fan. They can be bothersome when it happens, but they don't linger on in your head for the most part.

The actions of the team that I love linger though, and after Sunday, I love them a little bit less. That could change with a win tonight and the team not acting like they're the Bruins, but I don't know for sure that it will, and that's an odd feeling.

There were a rare few Habs fans after the game pleading for balance from media as far as calling for suspensions goes. Was Chris Phillips' elbow on Brendan Gallagher in the first pretty dirty? Yes. Was the cross check to P.K. Subban's face that went uncalled dirty? Yes. Was there a balance in dirty plays between the two teams? No.

The Habs instigated it. They were poor sports, and they turned a winnable game into a blowout by having a complete mental collapse.

I really don't blame Shanahan for the situation the NHL has gotten itself into. They wanted to get tougher on suspensions and bring in a guy who had clout and who understood the game from a player's perspective. Enter Shanahan.

In his first preseason, he did exactly what people wanted. His explanations were clear and consistent, people were getting suspended for awful plays and essentially everyone was on board, except for a few important people.

Near the end of preseason there were rumblings that a couple of owners weren't happy that good players were going to be subject to suspensions so easily. Then those rumours turned into some owners most definitely not being happy as reported in Friedman's 30 Thoughts, I believe.

Shanahan was faced with a decision, ease up like his bosses want, or become the fastest person to get fired in a league that allows Bruce McNall to be chairman of the board of governors.

Shanahan chose to keep his job, and as a result the NHL's disciplinary actions have devolved into two different strategies:

The Easy, and the Statement

A friend of mine who's very wise put the first of these ideas into my head. When you look at suspensions that Shanahan has made over the last year, almost all of them have something in common. They're easy calls. The rules are clearly violated to any viewer, regardless of biases. The player who got hit is injured. And perhaps most importantly of all, the hitter isn't a super important player.

Usually the easy calls get a phone call and a 1-4 game suspension, but mostly 1-2.

The statement comes when a player is a repeat offender (and not a star player), the person getting hit is usually very hurt, and it's been awhile since the last big suspension. This suspension is used to shock the repeat offender into changing, and remind everyone else that you can be smacked down if you're a perpetual line-stepper.

Raffi Torres and Matt Cooke are examples of this. If Ryan White didn't have a clean record when he hit Kent Huskins this year, he would have been added to this list. He wasn't though, so Shanahan's statement was a little weaker with just 5 games.

Everything kind of goes out the window in the playoffs though, doesn't it? As a rule, suspensions are basically halved. 1 gamers become nothing, and to earn more than 1 game you need to give the NHL every reason to suspend you.

Gryba met that criteria on all fronts. He laid a textbook headshot from the blindside on a vulnerable player, the player suffered a serious injury, and he was completely unapologetic. He didn't even try to reach Eller in the hospital, something even Zdeno Chara tried to do right away.

And for those who say it wasn't, please. 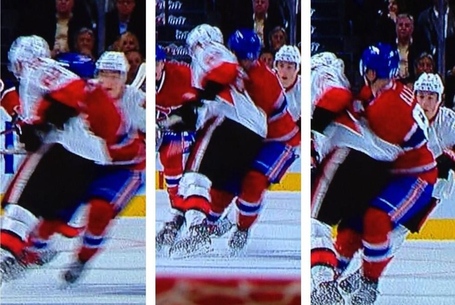 Gryba's first contact is with Eller's head. His second is the inside of his right hip, which causes Eller to spin around in the air. You can argue in circles about it, but the evidence is plain. This is what happened.

If Bourque wasn't trying to elbow Cory Conacher in the head there, he was trying to butt end him in the face, which is probably worse. It's blatant, it wasn't his first dumb play of the game, and aside from him actually being very good this year, it fits all the categories of "The Easy"... In the regular season.

Bourque is a repeat offender, so he may have got a couple games for it during the year, but Conacher kept playing, the elbow didn't even knock him over, and unlike everyone else in this series between the Canadiens and Senators, he didn't even lose a tooth.

For me, this doesn't really matter. I would suspend Bourque. However I'm not the NHL, and in the NHL, in the playoffs, you have to make it an easy call for them. Bourque has 2 goals in 3 games, no one was injured, it doesn't look dramatic on video, so no suspension.

Right call or not, I think that's how it's made.

I think we can all agree on one thing, I hope this is the end of the garbage in this series, and the two teams agree to play hockey.