The Hurt Locker: Studying the Impact of NHL Injuries - 2012 Results and Power Rankings

As we wait for the 2013 NHL playoffs to kick off, let's look back at how injuries played a part in last year's regular season and playoff results, leading up to the LA Kings' Stanley Cup victory.

Share All sharing options for: The Hurt Locker: Studying the Impact of NHL Injuries - 2012 Results and Power Rankings

Sometimes you suffer a devastating headshot, sometimes you have your achilles sliced, and sometimes you don't backup your computer enough and have all your accumulated injury data lost forever. Luckily, it was the latter that befell me last month, and as a result it has taken longer than expected to get this third edition of The Hurt Locker up and running (Update: sometimes it happens again as you're writing about it happening, and then you have to get a new laptop).

For those new to these posts, they are based on the statistic "man minutes lost", which is intended as a more precise measure than "man games lost" of how teams are affected by injury over the course of a season. It is by no means a flawless stat, but it gives a little more insight into how this aspect of luck has played out. For a more complete introduction of the statistic, and for 2010 results, click here. For 2011 results, click here. All regular season data was borrowed from Springing Malik, while all playoff data I accumulated myself thanks to NHL.com and TSN.ca.

For the last two editions, I tried to see if there was any particular correlation between injuries and success. Considering that I couldn't find anything conclusive - likely because a good team will be sidetracked by injury far less than a bad team - I won't do the same here. Instead, I will break down the teams one by one, sorting them in descending order of regular season injury troubles, while also posting how they were affected in the playoffs.

First off, here is a refresher on how the standings played out last year. 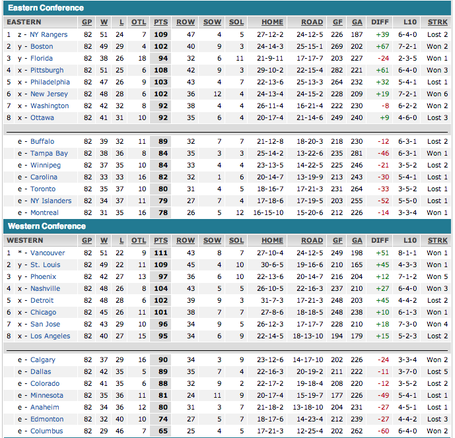 And now, here are the 2011-2012 Regular Season NHL Injury Power Rankings. The categories listed are MML/G Rank (in ascending order, 1 being luckiest, 30 being least lucky), MML/G, NHL Reg. Season Finish, and Differential. Differential is the difference between the team's ascending MML/G position and its final place in the standings. The teams are sorted by this differential, to give an idea of how well each one coped, whether they were able to outperform their injury luck, and by how much.

And now, here are similar power rankings for the 2012 Playoffs. If you can't remember what happened, here's a reminder.

And now for the power rankings. Here, I have listed MML and MML/G, to give an idea of the sample sizes for each team, some being as small as five games. MML/G Rank is once again in ascending order. I have listed playoff wins as well, as the replacement for regular season finish for this differential will be playoff wins rank, which includes numerous ties.

Most costly injury (not including players that missed all 82 regular season games): Chris Pronger (11/11 games)