Canadiens vs Bruins - Game Recap - Habs own the Bruins in 2013

The Canadiens took full advantage of the absence of Patrice Bergeron to take the season series with the Boston Bruins.

Share All sharing options for: Canadiens vs Bruins - Game Recap - Habs own the Bruins in 2013

The Boston Bruins are really not the same team without Patrice Bergeron. David Krejci does okay, but it's pretty clear from the three games without Bergeron that Tyler Seguin isn't ready to be a top end center.

Seguin last night started 88.9% of his shifts in the offensive zone, but got dummied for a 36% Fenwick at even strength. To make matter worse. according to Olivier's scoring chance tracking, Seguin was outchanced by 7 (1 chance for, 8 against). Playing mostly against Lars Eller and Alex Galchenyuk, the young center couldn't cope.

Galchenyuk's second goal in as many games was a fortunate bounce, which is something he hasn't been able to buy for most of the season. Hard on the puck all game, his line with Eller and Brandon Prust killed the Seguin line, and held strong against the Jagr line as well.

Tomas Plekanec's line was outplayed pretty heavily by the Krejci line, but most of that occurred after the Canadiens had a 2-0 lead. Plekanec took a lot of hefty assignments once the Habs were up, as did Jeff Halpern. Halpern though, somehow managed to have positive possession numbers and +3 on scoring chances. Best waiver claim ever?

Two years ago around this time, Michael Ryder made a ball hockey style glove save for the Bruins that saved their bacon and allowed Nathan Horton to score later on to send the Bruins to an eventual Stanley Cup. His scoring streak in the last 12 games almost seems like he's trying to make up for it. Ryder's game winner against the Bruins last night was his 3rd marker in his last two games, and 3rd in his last two against Boston.

While the Canadiens let the Bruins take control of the possession game once they were up by two, they maintained positive Fenwick possession for nearly the entire game, blocking 23 of the Bruins' shot attempts. 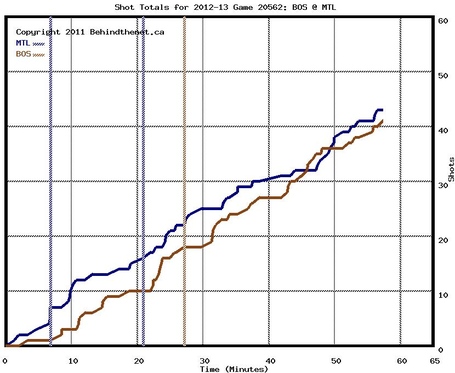 The win against Boston was especially sweet after the Canadiens have had trouble dominating teams of late. To play an even game against a team as strong as Boston is a great sign going forward.

Another great sign is the play of David Drewiske. In their half season review, LA Kings blog for SB Nation Jewels from the Crown noted that Drewiske may have been the most underrated player on the Kings' blueline, and he's looking pretty solid thus far in a Canadiens jersey.

Drewiske played 23:50 last night, 3rd most on the team, and although his possession numbers weren't flattering at a -6 Fenwick, he was twice as good as Francis Bouillon's -12.

In the absence of defense partner Alexei Emelin after going down with an injury, Andrei Markov also put up a great performance. Markov was the most heavily deployed defenseman in the defensive zone, and he still managed to come out of it even.

The most impressive player on the night though, is a toss up between goaltender Carey Price, and defenseman P.K. Subban.

The win for Price brings him into a tie for tops in the NHL in wins with 19, and brought his save percentage up to .916, his career average. Price was keyed in all game, tracking the puck and making saves look easy by swallowing pucks, not even allowing rebound off of Zdeno Chara slappers. The exciting thing about Price is that if his save percentage on the penalty kill regulates, we have a .927 goaltender on our hands.

Then there's Subban. With the team at +1 Fenwick and -10 Corsi on the night at even strength, Subban was a +16 Fenwick and +10 Corsi, with 45% offensive zone starts. To top it off, Olivier has him at +10 scoring chances on the game, 13 scoring chances for, 3 against. Subban's two assists on the night put him up to 32 points in 32 games on the year, and he's simply on another level right now.

For reaction from the losing side, check out Stanley Cup of Chowder.