Sam Pollock: A Beautiful Mind Part I — Fleecing the Bruins

Following the 1964 draft, Sam Pollock orchestrated a trade between his Canadiens and the Boston Bruins. The trade involved four collegiate prospect players; three skaters and one goaltender. Inconsequential as it seemed then, the trade would go on to have huge implications for the future of both teams.

Share All sharing options for: Sam Pollock: A Beautiful Mind Part I — Fleecing the Bruins

When I first got the idea to write this article, I had originally planned to devote its entirety to the career exploits of Sam Pollock as the Canadiens General Manager. I then realized it would pretty much have to be novel-length to adequately cover his greatness, and nobody would find the time to read it through. Instead, I'll be going over Sam Pollock's greatest hits in an ongoing series that will not necessarily be posted in sequence. Since the Habs are playing the Boston Bruins tonight, I decided to focus the first instalment on one of his moves that pertains directly to this rivalry, and is sure to make all Habs fans smile.

As this is the first article in the series, I'll start by introducing Pollock for anyone unfamiliar with him. Pollock was originally hired as the Canadiens Personnel Director, to be groomed as the successor to Frank Selke. He took over when Selke retired in 1963 and proceeded to continue the Canadiens dynasty throughout the 60s and 70s. He's the guy who hired Scotty Bowman, made a host of unbelievable trades, and has his name on the Stanley cup 12 times. With a still-standing record of nine cups as a General Manager, Pollock is undeniably the greatest GM in the history of the National Hockey League. Sadly, he passed away at the age of 81 in 2007.

My father grew up in Montreal, and he lived next door to Pollock; a pretty awesome neighbour to have as a Habs fan growing up. Sam once took my Uncle Todd to a game, letting him sit in the president's seat, and it wound up being the game where Guy Lafleur scored his 500th career goal. But, by my father's account, the man was quite reclusive and didn't converse much with his neighbours. According to him, his most memorable conversation with Pollock was when he was told sternly to remove his beer from the sidewalk immediately. So it seems Pollock was actually a bit of a jerk, but perhaps this contributed to him being as good as he was at his job. It certainly helped him to not feel any remorse when consistently fleecing other general managers around the league in trades.

The Bruins, our opponents tonight, were actually one of Sam's first victims. Many Habs and Bruins fans don't know this, but Ken Dryden was originally drafted by our hated rivals in round three of the 1964 draft. As hard as it may be for you to imagine Dryden in that black and yellow abomination, it was a legitimate possibility.

If not for Sam Pollock.

Almost immediately after the draft, Pollock traded college prospects Paul Reid and Guy Allen to the Bruins for Alex Campbell and Dryden. Due to how private the draft was in those days, Dryden didn't even know he had been drafted by the Bruins, he was told that the Canadiens drafted him and didn't find out the truth until years later. He wasn't displeased if you were wondering; he was, and is, quite happy with how things turned out.

"It was a very private draft in those days, I only found out about it one week later. The funniest part is that my junior B coach informed me that I had been taken by the Canadiens. It wasn't until 1974 that I found out otherwise."-Ken Dryden

The Bruins desperately wanted to get Guy Allen, as they viewed him as a potentially-huge-impact player for them in the years to come. Montreal had drafted Allen ahead of Dryden in the very same draft, so the trade was quite appealing to them as they were getting the player they had wanted in the first place. It was also known by both the Bruins and Canadiens that Dryden intended to head off to Cornell University and would not be joining the NHL immediately. At the time, US collegiate players did not often find themselves transitioning well to the pro level. As a result, this trade seemed completely inconsequential at the time as it was an exchange of college prospects. But, Sam Pollock was a genius. He was interested in Dryden despite his collegiate intentions and we all owe him a debt of gratitude for pursuing the big netminder.

This seemingly inconsequential trade has now gone down as one of the most significant in the history of the Montreal Canadiens and Boston Bruins. Hindsight is 20/20, but we now know Ken Dryden as a six-time Stanley Cup winner, five-time Vezina Trophy winner, 1971 Conn Smythe Trophy winner, Calder Trophy winner, and Hall of Famer with the Montreal Canadiens, not Boston Bruins. Oh yeah, Paul Reid and Guy Allen would not play a single game with the Boston Bruins, making the trade all the more hilarious. Alex Campbell also never played in the NHL, but I think we can get over that considering what we ended up getting in Dryden. 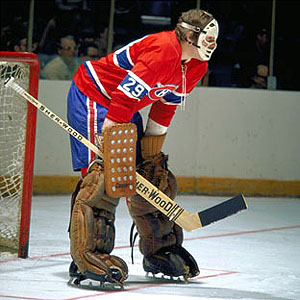 If you're a Bruins fan, and you've made it this far; get ready for the real sting. As mentioned, in his relatively short career, Ken Dryden is a six-time Stanley Cup winner. That's the same amount of Cups the Bruins have in their entire existence. As a late-season call up in 1970-71, Dryden was called in to replace Rogie Vachon and backstopped the Habs to an epic 4-3 series defeat of the defending champion Bruins in the opening round of the playoffs. While the Bruins did manage to win the cup in 1971-72, Dryden and the Canadiens proved too much to handle for the rest of the decade, defeating the Bruins numerous times, culminating in an epic seven-game series won by the Canadiens in 1979. I think it is safe to say that the biggest folly in the history of the Boston Bruins was them letting Ken Dryden go in 1964. Had they held on to him, our history, and the history of this rivalry, may be very different today.

Now if you've read either my first or second article, you'll know that I like to compare the past and present. I'm not even going to try and do that here. While I have been quite impressed with Marc Bergevin thus far, it would be absurdly unfair to compare his young career with that of the greatest General Manager in NHL history. As for Peter Chiarelli, I will grudgingly admit that he is annoyingly good at his job, and he has one Cup as a GM. But call me when his name is on there 12 times and maybe then I'll put him in the same breath as Pollock.

In summary, Sam Pollock rules and Ken Dryden is awesome. How do you like them apples?