The History of Montreal vs. Ottawa

Spoiler alert: It's pretty thin. While we all would have loved to see the 34 year Habs/Leafs playoff drought end, we will instead be treated by the first ever Habs/Senators playoff meeting. Since there is technically no playoff history between the two, enjoy a greatest hits article of the history between the round one opponents.

Share All sharing options for: The History of Montreal vs. Ottawa

There is a first for everything. Up until now, we have never seen an Ottawa/Montreal playoff meeting, which has me pretty excited for this series. In the pre-NHL era, they did face the Montreal Wanderers, Montreal HC and the Montreal Victorias for the Stanley Cup, but never faced the Tricolore. It might surprise some to learn that the original senators (who went by several names from 1884-1934) were pretty prolific winners. They won a total of 11 cups, including four straight during the "Silver Seven" era, which is pretty impressive. Naturally, the absence of a team in Ottawa from 1934-1992 leaves a massive gap in which much history could have been made between the teams. Perhaps if the senators had not been absent so long, we would have a rich playoff history to discuss ahead of this year's playoff opener.

Technically, there has actually been a series between the teams, but I find it hard to qualify it as a playoff meeting. At the tail end of WWI, the 1918-19 edition of the NHL was comprised of a mere 3 teams; Montreal, Ottawa and the Toronto Arenas. The Arenas were playing badly and were in financial troubles, causing them to withdraw from the league during the second half of the season. As a result, Montreal and Ottawa were the only teams remaining, and a seven game series was called to determine who would face Seattle for the Stanley Cup. Montreal took the first three games of the series rather easily with Ottawa's top player Frank Nighbor out. Then in game four, Nighbor returned to lead the Sens to a 6-3 victory whilst Ottawa fans pelted Montreal's Bert Corbeau with vegetables and lemons for attacking one of their players. The Habs, led by Newsy Lalonde went on to take game five and the series. Perhaps I'm being picky but I don't think you can call it playoffs if there really isn't any competition to determine the participants. At any rate, the Habs are 1-0 against the Sens in series play! The Habs went to face Seattle, but with that series tied it had to be cancelled due to the Spanish Flu epidemic. This marks the only time in history that the Stanley Cup was not awarded after the final had started.

While there is a distinct lack of playoff history, there have been some great moments between the Habs and Sens over the years. How about the first game back for the Senators in 1992? Ottawa finally had their team back and drew the Canadiens as their first opponent to much fanfare. The energized sens took it to the Habs and won the game 5-3 in one of few bright spots for them that season. It was great to have the Sens back, and probably felt great for the fans to get a win in their first game against Montreal, but they went on to an abysmal 10-70-4 record. I shouldn't have to mention that the Habs won the cup that year, but it is something that I never tire of mentioning. 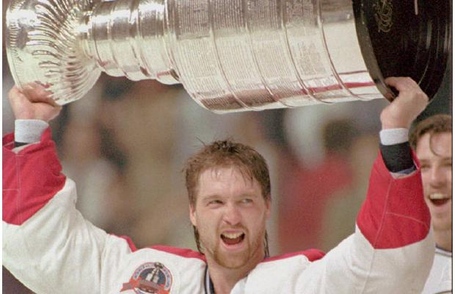 Or, how about the first ever Habs game in the NHL? The inaugural NHL season in 1917 saw two games between all four teams at the time. If you're not big on history and you're scratching your head, let me stop to explain. No, the "Original Six" are not the original teams of the NHL. Originally the NHL was formed by four teams; the Habs, Senators, Montreal Wanderers and Toronto Arenas. The term "Original Six" refers to the league as it was in 1942 when the Brooklyn Americans folded and the league was stabilized at six teams until expansion in 1967. But I digress; the Habs faced the Sens on December 19th, 1917 in Ottawa for our team's very first game in the newly formed league. Joe Malone went beast-mode on the Sens for the NHL's opening night, tallying six points; Five goals and an apple, en route to a 7-4 Habs victory. Malone remains one of only three players to score a hat trick in his team's first ever NHL game. 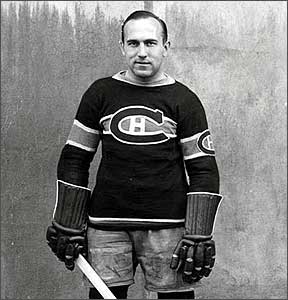 In 1928, Habs legend Howie Morenz set an NHL record against the Sens as the first player to pass the 50 point mark in a single season. It was the final game of the regular season and Morenz was sitting at 49 points on the year. In a 4-0 shutout win, Howie snagged two apples to give him 51 points on the year, a record at the time. This gave him the first scoring title in his Hall of Fame career and netted him a Hart Trophy as well. It's not a wonder that Howie Morenz is considered one of the first stars of the NHL, and it's a damn shame that he played in an era before television because I'd love to see video. You can see a short clip here but there is not a whole lot to be found. It's an even bigger shame that he passed away at the age of 34, but that's another story for another day.

Switching gears back to happy stuff; in my opinion the best moment of all happened just 12 years ago. Our Captain, Saku Koivu made his return from Cancer against the Senators in Montreal. I'm not the slightest bit ashamed to admit that I shed tears during his ovation (I was 11, what's your excuse?) and I doubt that I'm alone in that. Despite the highly emotional atmosphere, the Sens didn't lay down and were edged out 4-3 as the Habs clinched a playoff berth. This was one of my favourite moments ever as a Habs fan and it happens to have come against the Senators. Slightly unrelated: I'm not really an emotional guy, but if Saku were ever to come back to Montreal, I guarantee I would cry again. Everything about him is awesome and I miss him. I'll warn you now that I've posted the video below, so get your tissues out.

Alas, we now have mere days to wait before we will see the two teams meet in the Stanley Cup Playoffs. I have to think that this will be a tight series and a bigger challenge for our side than the Leafs would have been. It seems the Hockey gods are determined to prevent a Habs/Leafs series from ever happening again, but they may have blessed us with something even better in the Senators. Sure they lack the history of a true rivalry, but as those corny NHL Playoffs commercials say; "History will be made." And it shall, starting THURSDAY night at the Bell Centre.