Canadiens at Devils - Game Recap - A litany of lessons

The Canadiens are being given a lot of lessons of late, but question remains as to how much of these lessons are being absorbed.

Share All sharing options for: Canadiens at Devils - Game Recap - A litany of lessons

For the first time this season, I felt a real need to wait before writing a game recap. Not because of frustration, but because I needed to read what Olivier had on the game first. It's not that I didn't get a feel for what was happening in the game, but I was starting to worry that the last few games was corrupting how I was seeing what was playing out on the ice.

Turns out that I was kind of right, and kind of wrong.

We'll start with where I was wrong. I thought Rene Bourque had a really good game. Maybe he did on a personal level as far as successful plays to unsuccessful ones goes, but he was tied for a team worst -4 in scoring chance differential. As Olivier said (translated):

Yet if Eller, Galchenyuk, and Bourque had some beautiful moments in the offensive zone (including the goal of Eller), it was not reflected on the differential.

Where I was right, was how the flow of play went in the game. Two scoring chances for the Habs in the first vs six against was a bad enough start. Bad enough that talking about the quality of chances would only make it worse. I'm still not entirely sure how an NHL team allows this to happen:

But they were far better in the second, with five scoring chances to the Devils' three. That allowed them to claw back into the game and make us all stupidly hope, but it was Devils hockey in the third period.

New Jersey sat back the entire third, allowing just a single scoring chance and five shots against, while grabbing two chances of their own on the counter attack.

The frustrating thing about the game though, was that the Canadiens played the opposite way that you would expect a team to play in their situation. Even playing poorly, when you get behind in a game, usually you can take it to the opponent because they sit back. Looking at the Fenwick timeline of the game, we see a different story: 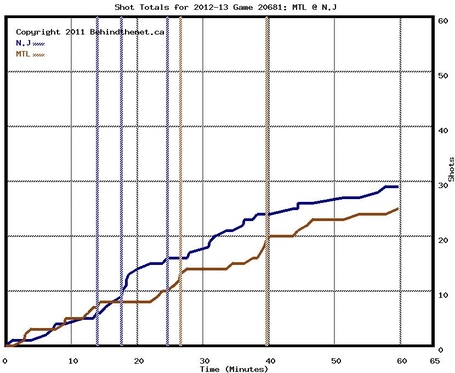 The Habs flatlined once the Devils gained the lead, and let them come at them until it was 3-0. Before the phantom call that lead to Patrik Elias's goal, the Canadiens were right there with the Devils, slightly ahead. Flatlining like that so badly tells me that this team is mentally rattled right now. If they give up the first goal, they don't have hope.

That's something that has to change if this team wants to make any noise in the playoffs. Mentally weak teams don't make it. Ask the 2010 Boston Bruins.

It's tough to find positives in this epic slide, but the Lars Eller and Alex Galchenyuk are players to look at for them. Eller has been woefully unlucky from a shooting perspective all season, yet in 44 games he's 4 points back of his career high, set last season in 79 games. He's produced more per minute than David Desharnais both at even strength and on the powerplay. And Galchenyuk? Raise your hand if you thought he would be this good at 18/19, coming off of missing a full year from ACL reconstruction. Put your hand down, liar.

There's no question that things have gone off the rails with this team, but outside of the penalty kill, it should be fixable problems.