The Warmup - Everything happening has happened before

The last 5 games have been tough to endure. 20% of the Habs' goals against in the entire season have been scored in those games, just 11.1% of the season. Should we be worried?

Share All sharing options for: The Warmup - Everything happening has happened before

I don't blame anyone for worrying about the Montreal Canadiens during this last week or so of play. Defensive coverage is awful, goaltending isn't much better, and the offense has been okay, but not good enough to compensate.

It's entirely possible that this streak lasts through the end of the regular season, into the playoffs, and ends in a first round exit. It's possible, but not likely.

According to Fear the Fin, the San Jose Sharks website for SB Nation, the Canadiens rank third in the entire NHL in score adjusted Fenwick, 1st in the Eastern Conference. Score adjusted Fenwick is something we haven't delved into on EOTP, but it is a metric created by Eric Tulsky of Broad Street Hockey that takes into account possession numbers from all game situations instead of just while the score is tied or close, weighted to derive which team truly keeps the puck more often.

According to Tulsky, score adjusted Fenwick has even greater predictive power for future success than Fenwick while the score is tied or close.

There was a Canadiens team that was strong like this before. They led their division all season, then fell apart in the final 18 games of the year, losing 11 times. Even worse, their starting goaltender lost his last 5 straight, with the only 2 wins in the last 7 games coming from the backup goalie.

That team was the 1993 Stanley Cup Champion Montreal Canadiens. That starting goaltender was Patrick Roy. That backup was Andre Racicot. Want proof? Here are the 1993 Habs' last 18 games: 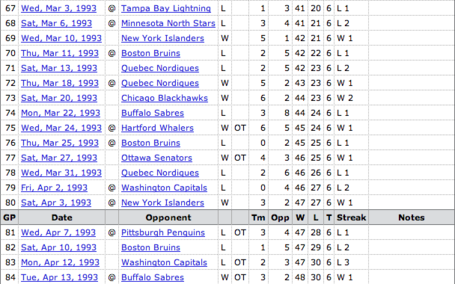 Hockey Hall of Famer, the near infallible Patrick Roy, had perhaps the worst season of his career the same season he had the best playoffs of his career. Going into the playoffs, fans and media wanted Andre Racicot to start against the Quebec Nordiques. After losing the first two games of the series, things seemed dire. The Habs and Roy then went 16-2, winning the 24th Stanley Cup in franchise history.

I'm not saying that the Canadiens are about to win the Stanley Cup, nor am I saying that Carey Price is Patrick Roy. What I am saying is that these things are unpredictable.

Why should we believe that the last 5 games are more indicative of the Canadiens' future play than the 40 that came before? Ask yourself that before you write this team off.