The Canadiens and the Maple Leafs: A Dying Rivalry?

Tonight, the Montreal Canadiens renew hostilities with our historic rivals: The Toronto Maple Leafs. For years this was one of the most recognized hockey rivalries. Today, this rivalry has lost some of its flare, but there is no reason it cannot return with a vengeance.

Share All sharing options for: The Canadiens and the Maple Leafs: A Dying Rivalry?

We all know who our arch nemeses really are nowadays. But this isn't about the pioneers of the wheel of excuses, it's about another original six rivalry that has lost some of it's fire in recent years. As the chants of "67" grow ever quieter within the walls of the Bell Centre; partly due to a 20-year Cup drought in Montreal, the Toronto Maple Leafs and Montreal Canadiens will renew their hostilities tonight. While the rivalry has cooled considerably, the thought of the two teams meeting in the playoffs this year has generated some discussion in the media, (see here, and here, and here) so let's talk about the history of this rivalry, and what has happened to it over the years.

The rivalry between the Habs and Leafs essentially dates back to the founding of the Leafs, but didn't really pick up until the late 1930's. I'd say it started when the Habs beat the Leafs at Lacrosse in 1931, but I would have no basis for saying that, I just think it's funny. When the Montreal Maroons suspended operations in 1938, never to return, they were the only two Canadian teams in the league for some time. And how fitting it was that the teams represented the two predominant ethnic groups in Canada, as much as they did its two largest cities. The rivalry in its beginnings was about more than just hockey, it was about French Canada versus English Canada, a conflict that dates well back into the 1700's. It should suffice to say that the good-natured chirping that we engage in today as fans, I imagine would have been much more venomous back then.

It may or may not surprise you to hear that this was once a real playoff rivalry. Up until 1978-79 they faced in the playoffs 15 times, five of those match-ups being Stanley Cup finals. Overall, the playoff picture paints itself as more-or-less even, with the Habs taking eight victories, the Leafs seven. Of the five Stanley Cup finals, things tilt slightly more towards the Leafs. Despite having Maurice Richard, the Habs lost the 1951 finals 4-1 in a series that featured five straight overtime games (I call pure luck.) The Leafs, in all have won three of the five finals meetings, including their last Cup victory in 1967.

The 1967 Cup final was one that the Habs definitely should have won. Everyone sure expected them to win, as they had swept the leafs in the previous season and had names like Jean Beliveau, Henri Richard, John Ferguson and Yvan Cournoyer on the roster. The Habs opened the series by curb-stomping the leafs 6-2 but lost the next two by scores of 3-0, and a double overtime loss of 3-2 in a game that has been referred to as one of the most exciting ever played. Then the Habs evened up the series with another 6-2 curb-stomping, but lost the next two games by scores of 4-1 and 3-1 to lose the series 4-2. While Montreal was clearly the better team on paper, the underdog Leafs managed to respond well to each bad loss en route to glory.

Not to worry Habs fans, this story ends happy for us. First of all, the Habs won the Cup the very next year, and have won it 10 times since 1967, whereas I need not mention when the last Maple Leafs cup was, except I already did. Ten years would go by before their next playoff meeting, and the Habs took their belated revenge in decisive fashion. The powerhouse Habs of the late 1970's swept the leafs in 1977-78 and 1978-79 on their way to two Stanley Cups. This is where the rivalry begins to fade, as the teams have not met in the playoffs since that 1979 sweep. 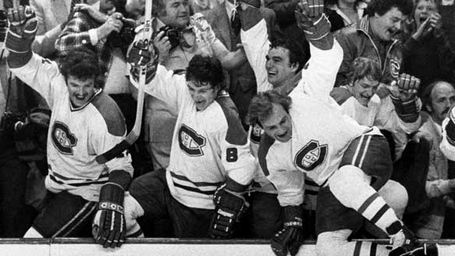 Aside from playoffs, people jumping teams during their careers has also stoked the fires a bit. There are a number of individuals who, over the years, have gone from the Maple Leaf to the Tricolore and vice-versa, least notably Mike Komisarek. But some of those we've sent to the leafs have come back to bite us; pun intended Grabovski... I know Doug Gilmour didn't go straight from the Leafs to the Habs, but if I may stir the pot anyways; he looked damn good in the Bleu Blanc et Rouge, no? From the Habs, Bert Olmstead, Dickie Moore and Jacques Plante all made the jump straight over to the Leafs near the end of their careers. The Plante part really gets to me; click that link so I don't have to elaborate, he was damn good with them. Frank Mahovlich left Toronto to play in Detroit, but Sam Pollock eventually brought him over to Montreal long enough for him to help win two Stanley Cups, so I guess that's consolation for Plante. What this terribly disconnected paragraph should tell you is that despite the cooling of this rivalry, neither side enjoys seeing their guys switch teams in any capacity, even years after the fact. That's part of what makes a rivalry; I have a massive man crush on Carey Price, but GOD FORBID the day he puts on a Bruins or Leafs jersey, I'll have to hate him thenceforth 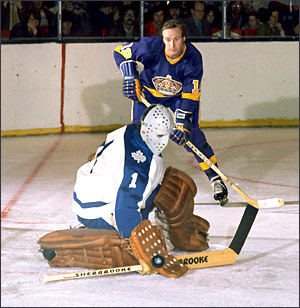 Jacques Plante as a Leaf- via cdn3.sbnation.com

Probably the worst of the defectors, just for how badly it bothers me is Ken Dryden. I know I can't really fault him for taking the job, but it sucks that he was once the President of the Toronto Maple Leafs. Dryden took over in 1997 and presided over their transition into the Northeast division, to help give the fans what they wanted: more Habs/Leafs games. Having both teams in the same division should naturally increase the chances of them meeting in the playoffs, but we're now 15 years removed and this still hasn't materialized.

Alas, the rivalry today ain't what she used to be, and it's not too hard to sum up what happened. The Maple Leafs have spent most of their days since the 70's as somewhat irrelevant in the Stanley Cup conversation. When they have been able to put together a playoff run, they would not face the Habs. As they were in different conferences for a significant period of time, the finals was the only time that they could meet. 1993 was the closest they came to reigniting the playoff rivalry, but the leafs fell to the Los Angeles Kings in the Clarence Campbell Conference finals. For a rivalry like this, not facing in the playoffs for over 30 years is something that will naturally take away from it's intensity.

I don't think this rivalry is dead, this year could very well be the year it comes back with a vengeance. There's no guarantee that they will meet in the playoffs this year, but it is certainly not unthinkable. I for one am optimistic that the Habs can hold on to take the number two seed, and as such would probably not meet them in the first round. But even if they don't wind up meeting this year, it seems that both teams may have reached a point where they will be perennial playoff participants, at least for the near future. So even if this is not the year that they meet in the playoffs for the first time since 1979, we may not have to wait much longer.

While 30-plus years without a playoff series would kill most rivalries, I don't think it has killed this one. I liken this to the sleeping dragon in "The Hobbit," as it will eventually wake and breathe fire into us all. I can't say for sure when it will happen, but with the way these two teams have been playing, I don't see it as being too far off.