After the Sabres stole three straight games from the Canadiens while being heavily outplayed in each, the Habs finally broke through and blew them out.

Share All sharing options for: Canadiens at Sabres - Game Recap - A well deserved drubbing for Buffalo

Once in awhile this season, you have to sit back and admire what the Montreal Canadiens have been able to accomplish. Not only are they on top of their division, which literally no one predicted, but they're doing this while down two top 4 defensemen in Alexei Emelin and Raphael Diaz.

A big reason the Canadiens are able to keep on going with injuries on defense has been the inspiring play of their rookies. Nathan Beaulieu was incredibly impressive once again last night, sporting the second best possession numbers on the team after Max Pacioretty. Beaulieu's skating and offensive instincts were on full display as he picked apart the Sabres' D for 4 shots on goal, and 4 more shot attempts in 16:50 of ice time.

Speaking of Pacioretty, the man remains snakebitten. 5 more shots in the game, making it 2 goals on his last 58 shots, one of them being an empty netter. Bold prediction, Pacioretty scores against the Leafs tomorrow.

In his first game after signing a two year extension, the Canadiens didn't give Peter Budaj much to do, but he played well. Budaj is now on a 7 game winning streak, the longest of his career.

Like the last couple games, the Canadiens absolutely owned the possession game against the Sabres. Here's a Fenwick timeline to show the gap in shot attempts: 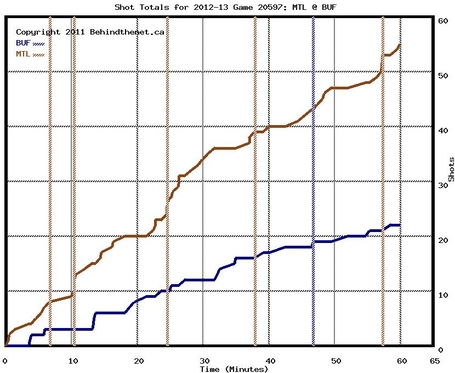 As you can see, the game was never close, and even when the score was no longer close, the Canadiens never stopped pushing against Buffalo, clinching a playoff birth after finishing 28th overall last season.

The real story of the game though, was perhaps P.K. Subban's shot. I remarked in the top six minutes recap that Tyler Myers should stop blocking Subban's shot, and that he probably had to go to the hospital after the game. Turns out that I was actually right, and that Myers' leg was broken by a Subban shot near the end of the game, and he's been shut down for the season.

Markov and Subban continue to click on the powerplay, which isn't surprising when you consider the talent those two have. the two of them lead the league in powerplay points with 22 and 23 respectively. It's probably getting repetitive as we say it over and over again, but this team is very good, and getting better.

For reaction from the losing side (where they hate me) check out Die By The Blade.