The Canadiens battled back after a poor second period against Carolina, but they'll be looking for a more complete effort against Tampa Bay.

Share All sharing options for: Canadiens at Lightning - Game Preview

The Montreal Canadiens are coming off of a game very similar to the last game they played against the Tampa Bay Lightning. After building a 3 goal lead against the Lightning after the first two periods on February 12th, the Habs allowed 3 straight goals in the third period to tie the game.

Carey Price made a big statement in the shootout by stopping all 3 shots, and David Desharnais scored the winner to preserve the victory, but it was a heart stopper of the game.

Hopefully this time around Victor Hedman isn't allowed to skirt the rules by punching a puck in the net.

The Canadiens will be facing Cedrick Desjardins in net tonight, recently acquired by the Lightning from Montreal in exchange for Dustin Tokarski. One of Desjardins 2 career NHL starts has come against Montreal, a listless 4-1 victory for the Bolts with Desjardins making 27 saves on December 30th, 2010. Max Pacioretty beat Desjardins on the first shot of the game, but they couldn't beat him again.

Curiously, that game also included a questionable goal by the Lightning, as Steven Stamkos was awarded a penalty shot and elected to do a spinerama. The puck came to a complete stop before Stamkos beat Carey Price, which means it shouldn't have been a goal, but things like that are missed often.

The top players against the Islanders last game were P.K. Subban and Lars Eller, who each had two points. Both players are streaking right now, with Subban on a 5 game point streak (3 goals, 4 assists), and Eller with 5 points in 4 games (1 goal, 4 assists).

Two players will be making their season debuts tonight for Montreal as Gabriel Dumont looks to be drawing in over Ryan White, and Greg Pateryn is set to make his NHL debut on the third pairing with Francis Bouillon. It seems like Therrien doesn't like Tomas Kaberle playing his off side, which makes sense. Dumont will wear number 37 tonight, while Pateryn will wear number 64. Pateryn will be just the second player to wear 64, the only other player being Jean-Philippe Cote.

The Habs are undefeated against the Southeast Division this season with a 7-0-0, the only team in the Eastern conference who's managed that.

To get an idea of how Guy Boucher uses his roster, let's take a looks at the Lightning's player usage chart: 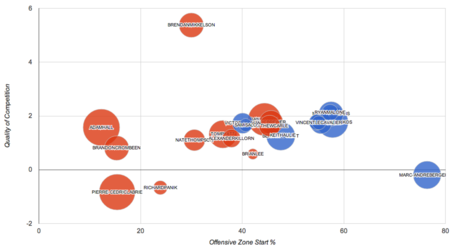 Check out Raw Charge for the perspective from the other side.