The Canadiens are in Carolina tonight to take on the Hurricanes. Can they repeat their 3-0 shutout performance from February 18tth?

Share All sharing options for: Canadiens at Hurricanes - Game Preview

After a disappointing loss to Long Island, the Montreal Canadiens face off against the Carolina Hurricanes tonight in Raleigh.

The Hurricanes lost Cam Ward for essentially the remainder of the season, but they've ridden their dynamic top line to a 4 game winning streak regardless. Eric Staal, Alexander Semin and Jiri Tlusty have been on fire, with Staal tied for 4th in the league in scoring. The line has 9 goals and 15 points in the last 4 games.

The Canadiens also had the advantage last time around of no Jeff Skinner in the lineup, so the Hurricanes were essentially a one line team. This time, on the road, the matchups will be far tougher.

The Canadiens will depend on having three lines that can score, but their weakness may be the 3rd pairing. Therrien has made some changes there for tonight, with Yannick Weber drawing into the lineup for just the second time in half of a season. It's unclear who will be taken out of the lineup, but most likely it will be Tomas Kaberle.

P.K. Subban predicted that Weber will score tonight, which is both awesome and ballsy.

Hurricanes coach Kirk Muller has the Hurricanes playing a solid possession game, one of only two teams in the Southeast Division that can claim that. The 4 game winning streak saw them overtake the other team, Winnipeg, for 3rd place in the Eastern Conference.

How is he using his lineup? Let's take a look at a player usage chart to figure it out. The further to the left and higher up a player is, the tougher their usage is. If a player is far to the right and down on the chart, they are heavily sheltered. If a player's bubble is blue, their possession (Corsi relative in this case) is positive, orange is negative. The larger the bubble, the larger their possession is positive or negative. 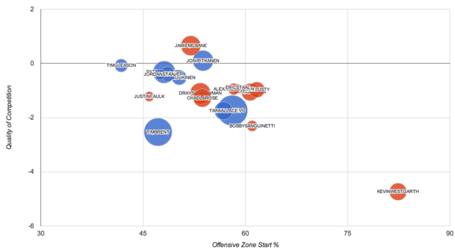 Carey Price gets the start against the Hurricanes after Peter Budaj recorded a 19 save shutout in the previous matchup. Price has a 6-5-1 record against Carolina with a .919 save percentage. He'll be looking to improve on that after two extremely rough starts.

Both teams are beginning to rack up the injuries, along with Ward the Hurricanes are missing Joni Pitkanen, Tuomo Ruutu, Tim Brent, and Chad Larose. The Canadiens meanwhile are still missing Rene Bourque and Raphael Diaz, who are both out indefinitely with concussions.

Check out the preview from the other side at Canes Country.