The Hurt Locker: Studying the Impact of NHL Injuries - 2011 Results

In 2010, the Chicago Blackhawks rode some favourable injury luck to a Stanley Cup victory. Using the metric of Man Minutes Lost, how big of a factor were bumps, bruises, and life-threatening concussions to the final results a year later, culminating in a Bruins championship?

Share All sharing options for: The Hurt Locker: Studying the Impact of NHL Injuries - 2011 Results

The 2010-2011 NHL Season featured a series of significant long-term injuries that affected teams' fortunes. Zach Parise missed 69 games with a knee injury and the Devils missed the playoffs for the first time since 1996. The Islanders missed Mark Streit, the Canadiens lost Andrei Markov, and the Senators struggled without Pascal Leclaire. The most notable injury, however, and the one which got the hockey world talking, was Max Pacioretty's severe concussion and fractured vertebra as a result of a check into the Bell Centre stanchion from Zdeno Chara. I think it's fair to say that the image of Patches lying on the ice will be one of the enduring images from that season.

For those that missed my last post, this series revolves around studying the impact of NHL injuries based on the importance of players to their teams. The metric Man Minutes Lost, which is found by multiplying the number of games lost for each player by their average time on ice, is a more accurate description of how teams are affected by injury, both in the regular season and the playoffs. All regular season data is courtesy of Springing Malik. All playoff data I tabulated myself, using TSN.ca and NHL.com as references.

For a more detailed introduction, and a look at the 2010 results, click here. With that out of the way, let's get started. 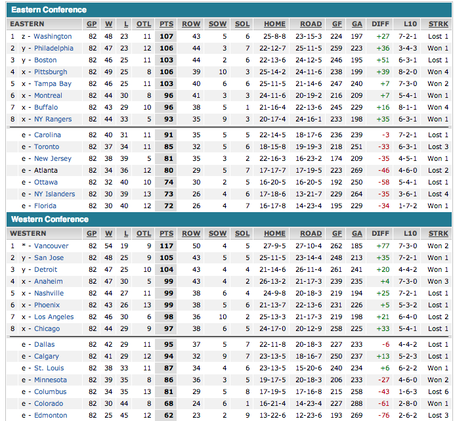 The 2010-2011 regular season was owned by the Vancouver Canucks, as they ran away with what would be their first of two consecutive Presidents' Trophies. The Capitals picked up where they left off the year before in terms of the standings, but were a much more subdued offensive club. Overall, only three new playoff teams emerged - Anaheim, Tampa Bay, and the Rangers - while three fell out - Colorado, New Jersey, and Ottawa.

And now here are the cumulative Man Minutes Lost per Game numbers for the regular season:

In 2010, Edmonton was the team whose regular season was most plagued by injuries. For 2011, it was the Islanders. Goalies Rick Dipietro, Kevin Poulin and Nathan Lawson missed a combined 69 games, but losing Mark Streit for the entire year was likely the biggest issue for a team with minimal defensive depth. The Canucks overcame immense defensive losses — Hamhuis for 18 games, Ballard for 13, Salo for 52, Bieksa for 16, Edler for 31, Alberts for 33, Rome for 8, Ehrhoff for 3, Parent for 13, Tanev for 2, Sweatt for 30 — to post the best record in the league, while great injury luck didn't help the Leafs, who once again missed the playoffs. Carolina set a new benchmark for health, with Pitkanen, Jokinen, and Tlusty — missing 10, 12, and 14 games respectively — its only significant misfortune. 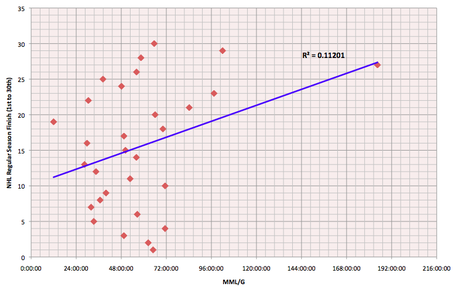 Once again, there is a very slight positive correlation between injury misfortune and a lack of success, but like in 2010, take away the one outlier and there really isn't a connection at all. The reason for this is fairly simple: teams don't start out at the same talent level. Some teams have more depth; some teams have less. Some have more high-end skill; some have less. It seems like by and large injuries can't be used as an excuse for a bad season, at least not on their own.

The 2011 playoffs were will be remembered for the Canucks' exorcism, Tim Thomas's miraculous play, and this gem from DownGoesBrown. But there was also another Capitals fizzle, a Flyers goaltending calamity, and Roberto Luongo. For a more detailed — and aesthetically awesome — look back at those playoffs, check this out:

In 2010, the Flyers ran away with the title of most injured playoff team, largely as a result of all of their goalies missing significant time. If one considers that an outlier — which isn't unreasonable considering the limitations of this metric — then the 2011 Montreal Canadiens are the most injury-plagued playoff team of 2010 or 2011 (stay tuned for 2012 results). As has been the case in every chart thus far, the Flyers were hit hard, however. Key pieces Chris Pronger and Jeff Carter both missed significant time, with fourth liner Ian Laperriere still on the payroll bringing that MML number even higher. Boston, as suspected, was one of the luckiest teams in the playoffs as far as health goes, while Phoenix and the Rangers will have been disappointed not to have capitalized, winning a combined one playoff game despite being at near full strength. Let's see how these points plot in a graph. 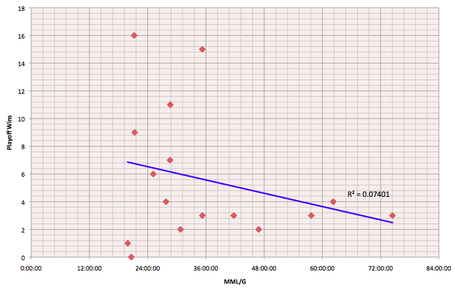 It was suggested to me following my last post to use playoff wins rather than round eliminated since, logically, this increases the variation in the y-axis. The trend continues, as there is a very weak connection between how hard a team is hit with injuries and how well they do.

It's interesting to note the connection between regular season and playoff injury struggles. Boston had very little injury troubles in the regular season and playoffs — if you take away Savard, who's a part of that team in salary only, they probably had the least in the NHL — and therefore understandably were able to ride solid 5-on-5 play and great goaltending to a title. Vancouver, on the other hand, struggled with injuries throughout the season, and therefore was prepared when facing the same difficulties in the playoffs. Mike Gillis and Alain Vigneault had built the depth to compete. Buffalo and Anaheim, on the other hand, were mostly healthy in the regular season, allowing them to creep into the playoffs. I'm not going to say that suffering key injuries in the playoffs led to their first round losses, but it couldn't have helped. Sometimes, surviving a rough 82 games will prepare you for the inevitable punishment that comes with the post-season. Then again, if you're the Bruins, sometimes the hockey gods just shine favourably upon you, as they did with the Blackhawks in 2010.