Winners of four in a row, the Canadiens travel to New Jersey to take on the Martin Brodeur-less Devils on Hockey Night in Canada.

Share All sharing options for: Canadiens vs Devils - Game Preview

The Canadiens are in New Jersey tonight where the Devils' attendance numbers are higher than they've been in years. Thus far, the Prudential Center has hosted 17,252 viewers per game, up to 20th in the league in attendance, one spot ahead of the New York Rangers. That's right, the Prudential Center is more full on a nightly basis than Madison Square Garden. That's what can happen when your tenant is a defending Stanley Cup finalist, and your neighbor is struggling in 9th place in the Eastern Conference.

Despite coach Peter DeBoer's early claim that he had the best goalie tandem in the NHL, the Devils have had troubles in goal while Martin Brodeur has been out with a sore back. While Brodeur has posted a .911 save percentage on the year, backup Johan Hedberg has been awful with a .886. Presuming he starts over minor-leaguer Jeff Frazee - Brodeur is unlikely to play - Hedberg will look to build upon stronger play recently. The Devils will be playing their third game in four nights, and will need their goalie at his best. Here's a look at how DeBoer has utilized his players thus far: 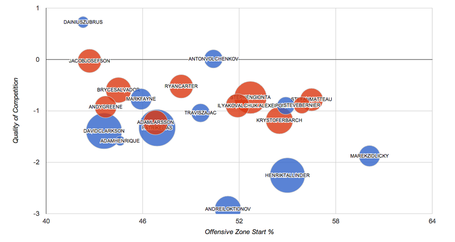 This is a matchup between two of the league's top FenClose teams, with the Devils sitting just ahead of the Habs at 7th and 8th, respectively. That's about where the similarities end, however. The Canadiens' powerplay is 8th in the NHL, the Devils' 19th. Montreal's penalty killing is ranked 17th, while New Jersey again trails in 24th. And then there's Carey Price. The franchise goalie has been remarkably average so far this season, with only one quality start in his last six. Luckily, it hasn't cost the team so far, but even random radio callers know that Price needs to be better for this team to go far in the playoffs, and likely for them to challenge the Bruins at the top of the division as well.

This is the second head-to-head meeting this year for the two teams, the first going to the Habs on an Andrei Markov overtime goal. The Canadiens played that game without Max Pacioretty and PK Subban, while Lars Eller drew into the lineup only because of injury. Now, those three among the team's hottest producers, and will be relied upon for this Saturday-nighter. The Habs will, however, be without Michael Ryder, meaning that Travis Moen will be promoted to the Plekanec line. Mike Blunden draws in for his first action of the season, and Jarred Tinordi makes his NHL debut. The Canadiens are looking for a fifth-straight win, which would equal their longest streak of the season.

Check out In Lou We Trust for coverage from the Devils' side. The game begins at 7 p.m. on CBC and RDS.

TiqIQ's job is finding the best deals and sellers out there for you, and for this game you may want to have a look at FanXchange for Montreal Canadiens Tickets