The Boys in Blue: An Introduction to the Montreal Impact for Canadiens Fans.

For years, the Montreal Canadiens have been the undisputed top sports dog in this city, and that's unlikely to change any time soon. But there is a new challenger in the ring, sporting the more traditional Quebec blues, and as it holds its home opener Saturday at Olympic Stadium, it might be time to learn a little more about our new love affair.

Share All sharing options for: The Boys in Blue: An Introduction to the Montreal Impact for Canadiens Fans.

The Montreal Impact takes on Toronto Football Club at the Olympic stadium today at 4 p.m. in its 2013 home opener. Therefore, hockey fans, it might be time to learn something about this city's newest major league franchise.

This is a Canadiens site first and foremost, but it's a Montreal site second, so let's take a look at Major League Soccer's Montreal Impact. Sofiane Benzaza (@Sofiane_Benzaza) and Giovanni Sardo (@GioSardo) do a fabulous job covering the team for SB Nation's growing Mount Royal Soccer, and for more extensive coverage I recommend you check them out. What follows here is an introduction to the team catered to Canadiens fans. I will go over a brief history of the club (spoiler: no Centennials quite yet), and match up the different players between the two teams as well as possible. Hopefully, these two fanbases can overlap as much as possible, because I have been a huge fan of both teams since 2004 and it's been an absolute pleasure, with euphoric highs devastating lows. So here goes.

The Impact was founded in 1992 to play in the North American Soccer League (edition 1.0), and later the United Soccer League. The club won its first title in 1994, and despite largely successful campaigns, didn't win again until 2004. In 2008, Joey Saputo, the club's owner, unveiled a new soccer-specific stadium (named Saputo Stadium) just next to the Big O, and it continues to play its summer games in that venue today. The Impact won its third league title in 2009, following a horrendous start to the season, and in 2010 it was announced the club would become MLS's 19th franchise, to begin play in 2012.

Just like how Messi and Ronaldo ply their trade in the UEFA Champions League - a yearly competition between the best clubs from each league in Europe - North and Central America has the CONCACAF Champions League, which has historically been dominated by Mexican first division clubs. In 2008-2009, however, the Impact (then still a second-division club) pulled off a historic feat. It began by earning the lone Canadian berth in the competition, overcoming Vancouver and FIRST-DIVISION MLS side Toronto FC to qualify. Think of that as an ECHL side defeating an AHL team. The guys in blue then overcame even longer odds by making it out of their group in the tournament and qualifying for the quarter-finals, which set the stage for a February date at the Olympic Stadium in front of 55,000 people, against the reigning Mexican league champions - and this. It was beyond improbable, think of it as the Wheeling Nailers taking the first two games of a playoff series from the LA Kings. Unfortunately, the second leg featured one of the greatest collapses I have ever witnessed in sports - the Impact allowed four goals in the final 20 minutes, two in stoppage time - to lose 5-4 on aggregate, but that run will never be forgotten.

Toronto FC - The rivalry has barely begun, but it's bound to develop. Of course, the fact that TFC has yet to make the playoffs after seven years of MLS play means this rivalry is more likely to go the way of Habs/Leafs than Habs/Bruins.

Houston Dynamo - It's a strange choice for a rival, but when the Impact chose longtime Dynamo striker Brian Ching in their expansion draft last year despite the player's threat to retire if chosen, it ignited bad blood between the two clubs. The fact that Ching was soon traded back to Texas did little to tame the tension, as the two teams played several rough and tumble games in 2012.

The Impact may not yet have the casual fan base of the Canadiens, but their most prominent supporters group, the Ultras, sits together in one section every game, chanting and cheering and standing up for the whole game, making Saputo a tough place for visitors to play. If you're up for it, joining them in the section for a few games is the most exciting way to view a game. The Ultras also aren't scared to protest against team management, as was the case after a particularly embarrassing performance one year against Toronto, which gift-wrapped the Reds a spot in the Champions League. The Impact only showed up for half of that game, so the next game the Ultras took the first half off as well. 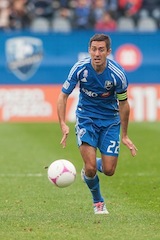 Davy Arnaud, now in his second year with the team, is a veteran of MLS and the Impact's captain. Like Gionta, he's been known to score big goals in big games,but he combines disciplined defensive play with strong work ethic to get the job done.

He scored the Impact's first goal in MLS last year, and also contributed its first goal this year, a stunning chip against perennial contender Seattle. 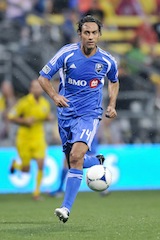 Alessandro Nesta is the face of the franchise worldwide. He won the World Cup in 2006 with Italy and was the heart of AC Milan's defensive line for a decade, winning two UEFA Champions League titles.

The Italian, considered one of the greatest defenders to ever play the sport, was signed by the Impact halfway through last season, and at 36 years of age, struggled with fitness. But this year, with a new coaching and training staff, he looks rejuvinated and, like Markov, seems ready to be a steady leader on the back end for his club. 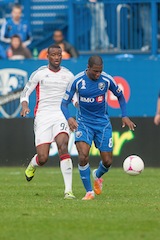 Position: Defensive Midfielder
Comparable: Tomas Plekanec
Patrice Bernier is the Impact's predominant French-Canadian, as Bernier has earned significant playing time with Team Canada in the past. After playing most of his career in Europe, Bernier returned to his home province and served as a calming presence in midfield last season. He also quietly led the team in scoring with nine goals, the majority of which came on penalties.
Like Plekanec, Bernier's the type of player that is largely under-appreciated because he isn't flashy, but his importance wasn't lost to the Montreal media and fans in 2012, as he was voted the team's season MVP.
Photo by Francois Laplante
Marco Di Vaio 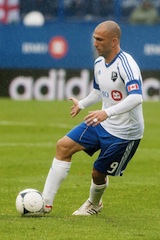 Position: Striker/Centre Forward
Comparable: Max Pacioretty
Di Vaio, like Nesta, is a veteran of Italian soccer, having scored more than 150 goals in its top division. Like Nesta, he was signed halfway through last season, and like Nesta, he struggled for most of last year. Di Vaio is also 36, but it was shocking how a famed striker of his reputation struggled to finish chances last year.
Through two games in 2013, Di Vaio has yet to pot a goal, but like with Pacioretty this year, we hope it's just a slump and that he will take over as the club's relied-upon attacking option. 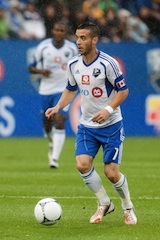 Felipe Martins came to the Impact as an unheralded 21 year old tiny Brazilian playmaker last year, and only one year later, he is considered one of MLS's top creators and finishers, and one of its top up-and-comers.

It was Felipe's through-ball that led to Arnaud's opener against Seattle this year, and it was he who set MLS ablaze with this incredible volley last year. It seems inevitable that the now 22-year-old will eventually head back to Europe to make a bigger name for himself, but for now he remains a crucial part of the Impact's plans. 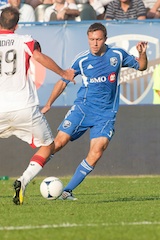 Position: Striker/Centre Forward
Comparable: Lars Eller
Andrew Wenger was selected first overall in the MLS Superdraft last year, and is a versatile player out of Duke University. He struggled to establish himself in the starting XI, especially after the signing of Di Vaio, but he has impressed when he has seen playing time, including the goal that sealed the team's first win in the league.
Wenger is also somewhat of a scholar, writing numerous impressive blog posts online, including this one about his initial impressions of Quebec culture. Much like Eller before breaking out the past few games, Wenger is a player to watch this year.
Photo by Francois Laplante
Troy Perkins

Position: Goalkeeper
Comparable: Carey Price
Perkins has been an absolute wall since coming over in a mid-season trade last year for the underperforming Donovan Ricketts. While he isn't generally discussed as one of the great goalies of MLS, he is about as solid as they come, rarely making mistakes.
In that sense, he really isn't much like Price, who can make desperation lunges seem routine, but who has recently has struggled against shots he knows he should save. Either way, it's fairly safe to say goalkeeping won't be an issue this year.
Photo by Steve Dykes
Hopefully, this has given hockey fans a good impression of the Impact, as an organization and as a team. Oh, and if you're looking to count shot attempts as a measure of how well the team is doing, then you won't be pleased. The Impact sit at 2-0-0 after two tough road games, but their Corsi, per say, sits at 32-16.
Today's game can be seen at 4 p.m. on TSN and RDS.