The Habs are in Florida tonight for an early start 6PM game, can they solidify their place at first in the Eastern Conference?

Share All sharing options for: Canadiens at Panthers - Game Preview

The Montreal Canadiens are playing the second half of a back to back set tonight, but that doesn't completely capture how much hockey this team has been playing of late. Tonight's matchup will be the 6th game the Canadiens have played in 9 days, 5 straight of which will have been on the road.

Their record so far on this hellish stretch? 3-1-1.

And the Canadiens finish off this stretch against one of the worst teams in the NHL, the Florida Panthers. The Habs have beat the Panthers twice already this season by a combined score of 5-1, although they needed overtime to get one past Jose Theodore in their last matchup.

And the man who scored that goal isn't going to be playing, as the Canadiens are finally succumbing to the injury bug. Rene Bourque is still out with a concussion for an indefinite time period, and he's joined on the injury list by Raphael Diaz, Yannick Weber, and most recently, Brandon Prust.

The Panthers have been hit with injuries of their own to worry about, with starting goaltender Jose Theodore, first line center Stephen Weiss, top pairing defenseman Dmitri Kulikov, Scottie Upshall, Mike Weaver and Ed Jovonovski all out.

The Panthers have turned to Jakob Markstrom in goal, and while he's been an improvement over both Theodore and Scott Clemmensen, he hasn't been able to stop the bleeding.

For the Canadiens, it's likely to be Peter Budaj in goal after Carey Price backstopped Montreal to a win last evening. Budaj is on a personal 3 game winning streak with a .944 save percentage and 1.33 GAA.

Here's a look at how Kevin Dineen uses his players: 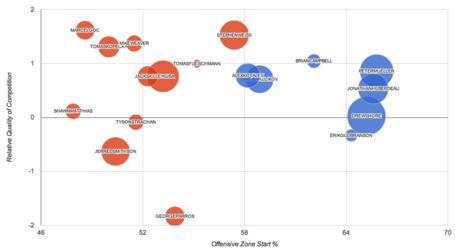 The Canadiens have a chance to sweep the season series against the Panthers, as well as improve to a ridiculous 9-0-0 against the Southeast division. Can the Habs manage it?

Check out Litter Box Cats for their game preview.