There were 16 players to wear number 10 for the Montreal Canadiens before it was retired in honour of Le Démon Blond, but no one is fit to carry a contest against him for the best ever. Also to wear #10: Bobby Boucher, Dave Campbell, Bill Collins, Jack Fournier, Jim Haggerty, Tim Harris, Paul Haynes, Fern Headley, Bert Hunt, Tim Johnson, Steve Malone, Bud O'Connor, Evariste Payer, John Ouilty, and Marc Reaume. 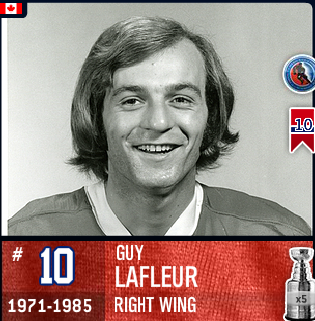 When we revisited a game from Lafleur's prime, we found him to be an incredibly dominant, elite possession player who wasn't sheltered in the least.

One of the most dynamic players to ever lace up skates, Lafleur's legend begins before he ever played for the Habs, as the draft pick to used to bring him into the organization was acquired in perhaps the greatest trade in NHL history, with Sam Pollock not only robbing the California Golden Seals of the pick, but also boosting the Los Angeles Kings with a lopsided trade to ensure that they could take Lafleur 1st overall.

Lafleur didn't disappoint, with a prime that included 6 straight 50+ goal seasons, and 9 straight seasons above a point per game. The most dominant player in the NHL at the time, Lafleur's number was retired upon his initial retirement in 1985.

There are countless great Lafleur moments, but I think the one people remember most is one of the most famous play-by-play calls of all time:

Some other 10's to consider: